Listen to the sounds of BepiColombo’s Earth flyby

Data sonification uses data to result in a sound, so that you can better perceive what the data show. Here are several audio recordings based on data from the Mercury-bound BepiColombo spacecraft’s Earth flyby on April 9. 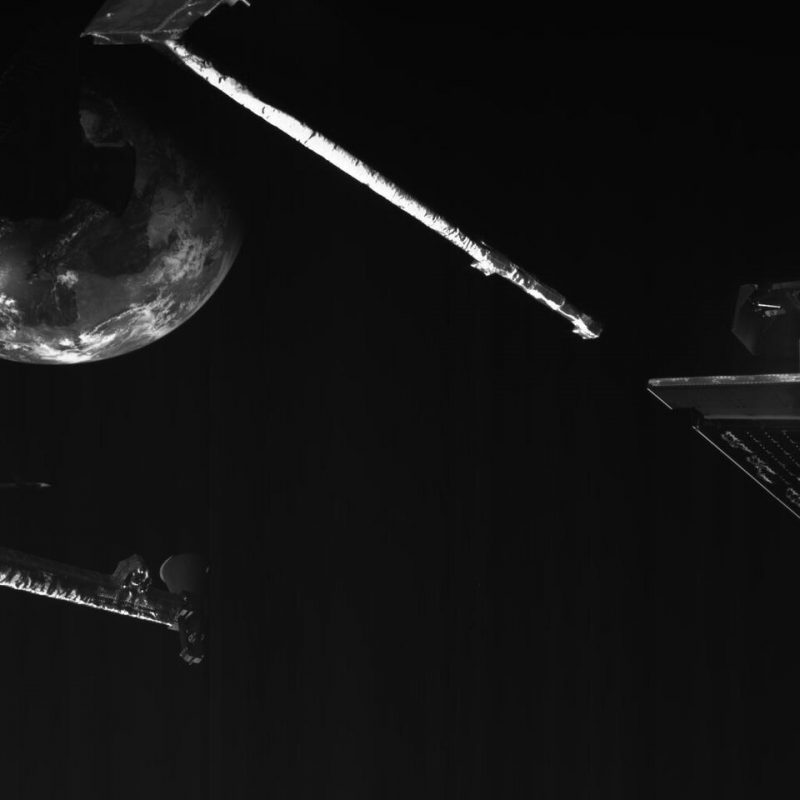 The BepiColombo mission to Mercury used one of its M-CAM selfie cameras to capture this glimpse of Earth, as the spacecraft hurtled past our planet on April 9. Images like these accompany the audio recordings below; the images correspond with the time when the audio recording was obtained. Read more about this image. Image via ESA.

Here are several more interesting examples of data sonification. The European Space Agency (ESA) released these on May 5, 2020. The data came from the Mercury-bound BepiColombo spacecraft, a mission developed by Europe and Japan. The craft – launched in 2018 – shot past us on April 9, in its first and only Earth flyby of the mission. During the flyby, the craft used Earth’s gravity to speed up and have its course altered slightly, sending it on its way to Mercury and the innermost planet’s many mysteries.

The audio recordings below are a byproduct of the mission, and they yield some science, too. The first two represent the sound of the craft approaching Earth and then passing it. The third comes from data collected when BepiColombo entered Earth’s shadow. The fourth – and eeriest – is based on the spacecraft’s passage through Earth’s magnetic field.

In a statement from ESA, scientist Carmelo Magnafico compared the following recording – of the spacecraft on approach to Earth – to the sound conducted through the rail when a train is approaching. He said:

It’s the same principle as when you put your ear on the rail to hear whether the train is coming.

Magnafico is a team member for an instrument called the Italian Spring Accelerometer (ISA) aboard the BepiColombo spacecraft. This instrument recorded the data used in the sonification above as the craft neared Earth ahead of its April 9 flyby. ESA explained:

The data in the recording were obtained on April 9, as the spacecraft approached the planet from the distance of 256,393 km to 129,488 km [about 160,000 miles to 80,000 miles]. Eight hours of measurements are condensed into a minute of audio. The original frequency of the dataset, inaudible to humans, had to be enhanced by the team from Italy’s National Institute for Astrophysics (INAF) in order to create the audio track.

The ISA instrument also gathered data used to create the next sonification as BepiColombo approached Earth’s surface from a distance of about 17,000 to about 8,000 miles (27,844 km to 13,107 km). ESA said:

The closest point of the flyby, which enabled BepiColombo to harness Earth’s gravity to tighten its trajectory around the sun, was at the distance of 12,689 km [about 7,900 miles] from Earth’s surface.

Again, the original frequency of the dataset was inaudible to humans. The data were enhanced and condensed so that one hour of measurements would equal about a minute of audio.

Scientists were particularly interested in data from BepiColombo’s ISA instrument as it showed the moment when the spacecraft entered a 34-minute eclipse period, that is, when BepiColombo was traveling through Earth’s shadow. The craft was past its closest approach to Earth at this point. It was the first time since the craft’s 2018 launch that its solar panels were not in direct sunlight. Carmelo Magnafico said:

The sun produces a little bit of force that acts on the spacecraft’s surface and also on the solar panel surface. When the spacecraft goes into the shadow, the effect disappears, and you can see a jump in acceleration in our plot and hear a change in the volume and characteristics of the related sound …

This is an extraordinary situation. Since we started the cruise, we have only been in direct sunshine, so we did not have the possibility to check effectively whether our instrument is measuring the variations of the force of the sunlight. This is a proof for us that the instrument is quite well-calibrated because the jump in the acceleration we measured is in line with our expectations.

When the spacecraft enters the shadow and the force of the sun disappears, we can hear a slight vibration. The solar panels, previously flexed by the sun, then find a new balance. Upon exiting the shadow, we can hear the effect again.

Hearing a clear effect of such a subtle influence showed the instrument is capable of registering the smallest differences in motion.

The magnetometer on board the Mercury Planetary Orbiter, one of the two orbiters composing the BepiColombo mission, made measurements of Earth’s magnetic field during the spacecraft’s April 9 flyby.

ESA explained what you heard in the audio recording above this way:

The audio, accompanied by the animation, is a sonification of the captured data created by the MPO-MAG team and not an actual sound recorded in space. The audio, compressing 8 hours of recorded data into a 26-second audio track, shows the moment when BepiColombo encounters the so-called bow shock at the outer edge of the Earth’s magnetosphere where the Earth’s magnetic field interacts with the solar wind. The spacecraft then passes through the magnetosheath, a turbulent region still considerably affected by the cosmic plasma, and crosses the magnetopause, the boundary after which the magnetic field of Earth dominates.

After that point, the sound of BepiColombo’s reaction wheels, which keep the spacecraft oriented in the correct direction, comes to the fore in the recording.

According to MPO-MAG Principal Investigator Daniel Heyner, of the Technical University of Braunschweig, Germany, the team could use the data recorded during the flyby to calibrate the instrument and prepare it for future measurements. The magnetometer will be on for most of BepiColombo’s seven-year cruise to the innermost planet of the solar system, measuring the solar wind at various distances from the sun.

Bottom line: ESA has released several audio recordings that use the technique of data sonification, based on data collected by the European-Japanese spacecraft BepiColombo during its April 9, 2020, Earth flyby.

Top 5 mysteries that BepiColombo will solve