Listen as Saturn and its moon interact

Spacecraft observations reveal plasma waves moving from Saturn to its rings and its moon Enceladus. Researchers converted a recording of the plasma waves into an audible cosmic whoosh that you’ll enjoy.

New observations from the Cassini spacecraft’s final orbits of planet Saturn reveal a surprisingly powerful and dynamic interaction of plasma waves moving from Saturn to its rings and its moon Enceladus. Research shows that the waves travel on magnetic field lines connecting Saturn directly to Enceladus. The field lines are like an electrical circuit between the two bodies, said the researchers, with energy flowing back and forth.

The recording was captured September 2, 2017, two weeks before Cassini’s mission-ending plunge into Saturn’s atmosphere. Researchers converted the recording of the plasma waves into a “whooshing” audio file – in the same way a radio translates electromagnetic waves into music. In other words, Cassini detected electromagnetic waves in the audio frequency range – and on the ground, we can amplify and play those signals through a speaker. The recording time was compressed from 16 minutes to 28.5 seconds. 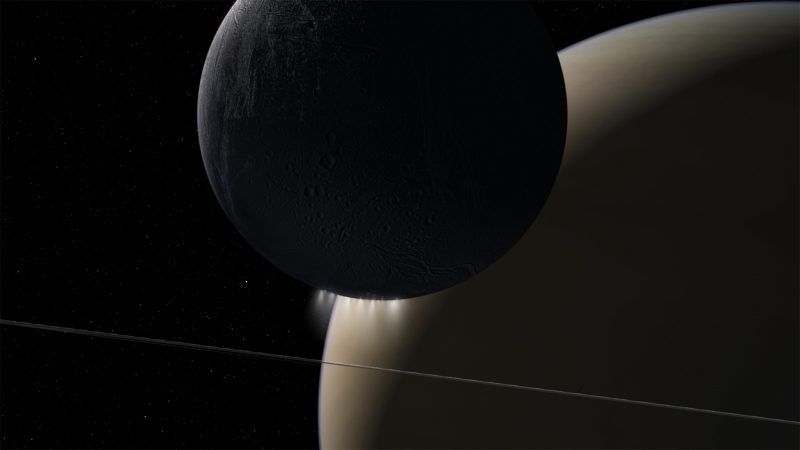 NASA’s Cassini spacecraft’s Grand Finale orbits found a powerful interaction of plasma waves moving from Saturn to its rings and its moon Enceladus. Image via NASA/JPL-Caltech.

Much like air or water, plasma (the fourth state of matter, which, unlike solids, liquids, and gas, does not exist freely on Earth’s surface under normal conditions) generates waves to carry energy. The Radio and Plasma Wave Science (RPWS) instrument on board Cassini recorded intense plasma waves during one of its closest encounters to Saturn.

Ali Sulaiman, planetary scientist at the University of Iowa, and a member of the RPWS team, is lead author of a pair of papers describing the findings, published June 7, 2018, and April 28, 2018, in Geophysical Research Letters. Sualiman said in a statement:

Enceladus is this little generator going around Saturn, and we know it is a continuous source of energy. Now we find that Saturn responds by launching signals in the form of plasma waves, through the circuit of magnetic field lines connecting it to Enceladus hundreds of thousands of miles away.

According to a statement from NASA:

The interaction of Saturn and Enceladus is different from the relationship of Earth and its moon. Enceladus is immersed in Saturn’s magnetic field and is geologically active, emitting plumes of water vapor that become ionized and fill the environment around Saturn. Our own moon does not interact in the same way with Earth. Similar interactions take place between Saturn and its rings, as they are also very dynamic.