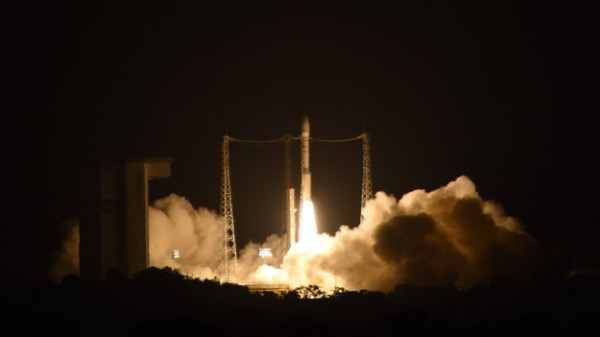 The trailblazing LISA Pathfinder mission lifted off earlier today (December 3, 2015) on a Vega rocket from the European spaceport in Kourou, French Guiana. The spacecraft is ESA’s technology demonstrator, designed to pave the way for detecting gravitational waves – ripples in the curvature of spacetime, propagating outward as waves from a mass – from objects in space.

About seven minutes later, after separation of the first three stages, the first ignition of Vega’s upper stage propelled LPF into a low orbit, followed by another ignition about one hour and 40 minutes into the flight.

The spacecraft separated from the upper stage at 5:49 GMT (6:49 CET). Controllers at ESA’s operations center in Darmstadt, Germany then established control.

On December 6, a series of six thruster burns will commence, which will lift the apogee of the elliptical orbit higher and higher over the next five days.

With LISA Pathfinder we will demonstrate crucial technologies for future missions such as eLISA and will be one large step closer to the detection of gravitational waves from space.

The LISA Pathfinder (LPF) launch coincides almost perfectly with the 100th anniversary of the publication of Albert Einstein’s theory of general relativity, published on 2 December 1915. The theory predicts the existence of gravitational waves, tiny ripples in space-time propagating at the speed of light, which so far have not been directly observed.

Read more about LISA Pathfinder and its mission. 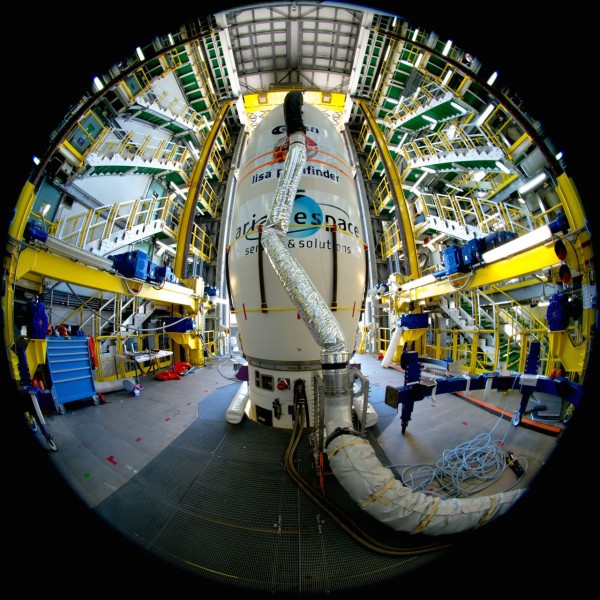 LISA Pathfinder, ready for launch. In this image, taken with an ultra-wide angle fisheye lens on November 19, the spacecraft is hidden from view, encapsulated in the ‘upper composite’ of its Vega rocket. Only the aerodynamic fairing at the top of the fully assembled launcher is visible, while the lower stages are hidden by the movable access platform. The hose is part of the air conditioning system that regulates the environment inside the fairing. Image and caption via ESA.