Many observatories simultaneously announced two spectacular firsts on Monday (October 16, 2017). One is that the U.S.-based Laser Interferometer Gravitational-Wave Observatory (LIGO) and the Europe-based Virgo detector have now both detected gravitational waves from the collision of two neutron stars; previously, they’d seen gravitational waves only from black hole collisions. The other is that some 70 ground- and space-based observatories observed the event, too, plus it was seen in optical light within 11 hours of the gravitational wave detection. Many scientists are hailing this discovery as the beginning of:

… a new era in astronomy.

But then astronomers do periodically claim the beginning of a new era … why? It’s because every time we see the universe in a new or different way, we get all-new insights. David Shoemaker, spokesperson for the LIGO Scientific Collaboration and senior research scientist in MIT’s Kavli Institute for Astrophysics and Space Research, said:

From informing detailed models of the inner workings of neutron stars and the emissions they produce, to more fundamental physics such as general relativity, this event is just so rich. It is a gift that will keep on giving.

Neutron stars are the smallest and densest stars known to exist, thought to be formed when massive stars explode in supernovas. The supernova explosion that created the gravitational wave event observed by these scientists happened over 100 million years ago, but was seen from Earth on August 17.

The gravitational signal, named GW170817, was detected on August 17 at 8:41 a.m. EDT by the two identical LIGO detectors, located in Hanford, Washington and Livingston, Louisiana. The information provided by the third detector, Virgo, situated near Pisa, Italy, enabled an improvement in localizing the cosmic event, these scientists said.

The gravitational waves were detectable for about 100 seconds.

At nearly the same time, the Gamma-ray Burst Monitor on NASA’s Fermi Gamma-ray Space Telescope space telescope had detected a burst of gamma rays. Analysis showed this detection was highly unlikely to be a coincidence. Rapid gravitational-wave detection by the LIGO-Virgo team, coupled with Fermi’s gamma-ray detection, sparked a cavalcade of follow-up observations by telescopes on and off Earth.

For examples, many large teams of astronomers across the world began working feverishly to find the event on the sky’s dome, using optical telescopes. As it turned out, a small, young group of researchers at the Carnegie Institution and UC Santa Cruz made the first optical discovery of the supernova that spawned the neutron star merger, less than 11 hours after it was detected via gravitational waves and gamma rays. The astronomers also obtained the earliest spectra of the collision, which may allow them to explain how many of the universe’s heavy elements were created—a decades old question for astrophysicists.

They’ve since labeled the supernova that exploded – and caused the neutron star merger – as SSS17a. 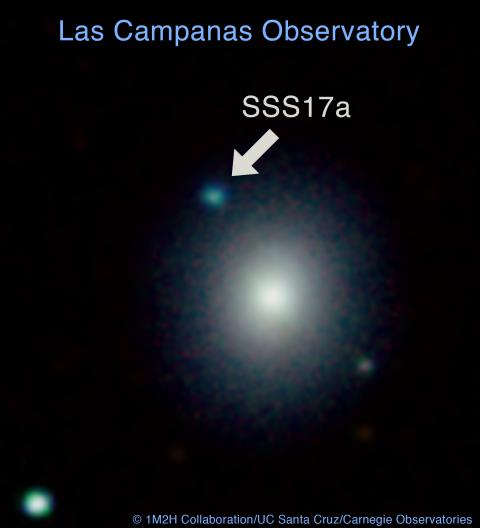 Swope Supernova Survey 2017a (or SSS17a) is the optical component of the gravitational wave discovery. The work in the optical is published in a quartet of papers in the journal Science.

We knew we only had about an hour at the beginning of the night to find the source before it set. So we had to act fast.

Josh Simon, another of the Carnegie team’s leaders on the optical discovery, said:

We saw a bright blue source of light in a nearby galaxy — the first time the glowing debris from a neutron star merger had ever been observed. It was definitely a thrilling moment.

Because they were the first to find the optical component of the gravitational wave event, the Carnegie astronomers had time for additional observations. They quickly set up spectrographs at the observatory’s two Magellan telescopes to obtain several spectra of the merger. No other observatories in the world made comparable observations during that first night. You can get a better sense for these astronomers’ story, told in the video below:

NSF explained more about the discovery in terms of gravitational waves:

The LIGO data indicated that two astrophysical objects located at the relatively close distance of about 130 million light-years from Earth had been spiraling in toward each other. It appeared the objects were not as massive as binary black holes — objects that LIGO and Virgo have previously detected. Instead, the objects were estimated to be in a range from around 1.1 to 1.6 times the mass of the sun — in the mass range of neutron stars. A neutron star is about 20 kilometers, or 12 miles, in diameter and is so dense that a teaspoon of neutron star material has a mass of about a billion tons.

While binary black holes produce ‘chirps’ lasting a fraction of a second in the LIGO detecto’s sensitive band, the August 17 chirp lasted approximately 100 seconds and was seen through the entire frequency range of LIGO — about the same range as common musical instruments. Scientists could identify the chirp source as objects that were much less massive than the black holes seen to date.

This detection has genuinely opened the doors to a new way of doing astrophysics. I expect it will be remembered as one of the most studied astrophysical events in history.

Read more about the LIGO and Virgo observations from NSF

Read more about the optical observations from CarnegieScience 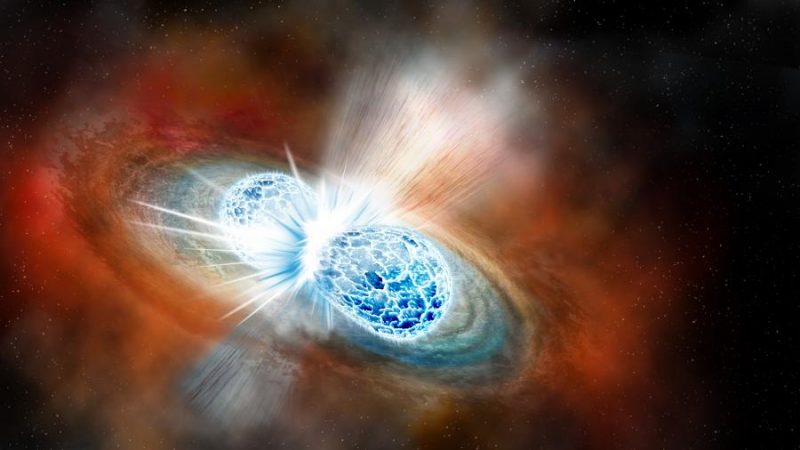 Artist’s concept of the explosive collision of two neutron stars. Illustration by Robin Dienel courtesy of the Carnegie Institution for Science.