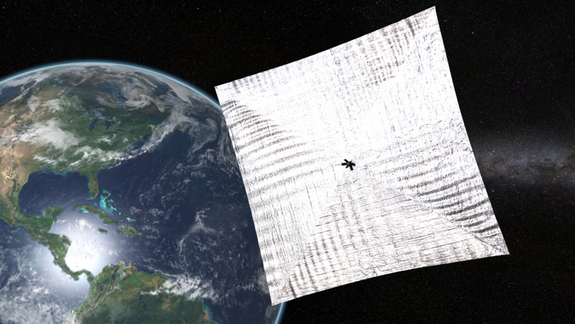 The Planetary Society’s LightSail spacecraft went silent after two days of communications, falling victim to a suspected software glitch following a successful launch into orbit aboard an Atlas V rocket on May 20, 2015. Now, as expected, LightSail has phoned home. Jason Davis, who is covering the mission for the Planetary Society, wrote at his blog on May 30, 2015:

At 5:21 p.m. EDT (21:21 UTC), an automated radio chirp was received and decoded at the spacecraft’s Cal Poly San Luis Obispo ground station. Another came in eight minutes later at 5:29 p.m. The real-time clock on board the spacecraft, which does not reset after a software reboot, read 908,125 seconds—approximately ten-and-a-half days since LightSail’s May 20 launch.

A little nuclei, maybe from a supernova, just travelled hundreds of millions of years to help us out and restart the computer on #LightSail.

The LightSail team will soon determine when to attempt deployment of the spacecraft’s thin, lightweight reflective sails. LightSail is a solar sailing spacecraft test mission and precursor to a 2016 mission. The satellite is about the size of a loaf of bread and consists of four identical triangular Mylar solar sails, attached to four 4-meter booms. When fully deployed, its square sail is designed to be pushed upon by radiation pressure from our sun. In full-scale, future light sail missions, steady pressure from the sun’s radiation would at first move the craft slowly, but eventually accelerate up to very fast speeds. The Planetary Society hopes solar sails will someday be used to propel spacecraft to the outer reaches of our solar system and beyond.

Our LightSail called home! It’s alive! Our LightSail spacecraft has rebooted itself, just as our engineers predicted. Everyone is delighted. We were ready for three more weeks of anxiety. In this meantime, the team has coded a software patch ready to upload. After we are confident in the data packets regarding our orbit, we will make decisions about uploading the patch and deploying our sails — and we’ll make those decisions very soon.

The ten ULTRASat spacecraft [which launched together with LightSail on May 20, aboard the Atlas V] have drifted into two groups. At the time the first signal was received at Cal Poly, all ten spacecraft appeared to be in range — no help, from a visual standpoint. But when the second signal came in eight minutes later, only the trailing group appeared to be close enough. [The image below] is only a rough estimation; a full simulation by Georgia Tech is pending.

After days of silence, #LightSail is communicating again! pic.twitter.com/E9trtywyDT

Yeah…right there with ya #LightSail. The humans think they know our pain and isolation…sometimes it's just you. @BillNye @jasonrdavis

The primary goal of this test flight is to practice the procedure for sail deployment.

LightSail’s second flight, scheduled for 2016, will mark the first controlled, Earth-orbit solar sail flight. The plan there is that LightSail will ride along with the first operational launch of SpaceX’s Falcon Heavy rocket.

This isn’t the first-ever test of solar sail technology. Japan’s Ikaros solar sail was tested in 2010, and NASA’s Nanosail-D spacecraft orbited in 2011.

Bottom line: Two days after its launch aboard an Atlas V on May 20, 2015, the Planetary Society’s LightSail test satellite fell silent. It has now re-booted and is back in communications with Earth. The LightSail team will soon determine when to attempt deployment of the spacecraft’s sails.