We heard quite a few people say they were disappointed by this past weekend’s annual display of Leonid meteors. The peak of the shower was Saturday morning, November 17, 2012 but apparently didn’t produce its predicted peak of 10 to 15 meteors per hour. Long-time sky writer Joe Rao at MSNBC.com, though, said earlier today you should give the Leonids another try tonight, especially if you live in North America. Rao said:

The traditional peak for the Leonids occurred before dawn on Saturday morning. Many reports however, indicate that this year’s display was unusually weak … But that’s not the end of the Leonids for this year. The year 2012 offers some of us another chance early Tuesday morning when the Earth passes through another Leonids debris stream. 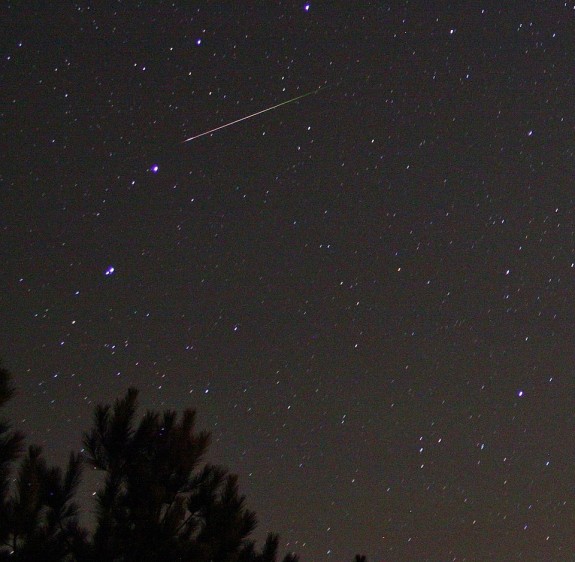 EarthSky Facebook friend Garry Snow captured several photos of meteors over the past few nights, after the peak of the shower. This one is from this morning, November 19, 2012. Thanks, Garry! 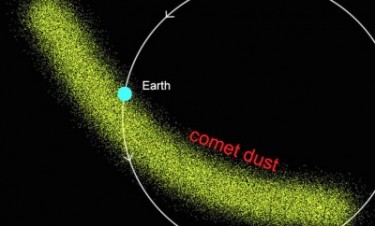 Meteors in annual showers happen when Earth encounters debris left behind by a comet. Astronomers have learned to calculate the various streams of debris in space, left behind by comets at different passages near the sun. Image by AstroBob

Why might there be an extra peak for the Leonid meteor shower? Like all meteors in annual showers, Leonid meteors originate as bits of icy debris left behind in the orbit of a comet, in this case Comet Tempel-Tuttle. Astronomers in recent years have been able to map the whereabouts of streams of debris left behind by comets. Two astronomers, Jérémie Vaubaillon of France and Mikhail Maslov of Russia, have independently calculated that the Earth is on target to pass directly through a small clump of debris shed by Tempel-Tuttle on Tuesday morning, November 20 (according to U.S. clocks – see below for more about times).

What’s more, this debris is old. It was left behind by Tempel-Tuttle when it made its closest approach to the sun the year 1400 A.D.

What time and where should I look? Earth is expected to encounter this debris between 12:30 a.m. and 3 a.m. EST Tuesday morning, November 20. That’s 5:30 to 8 UTC on November 20. Click here to translate UTC to your local time. In other words, we won’t all see this final hurrah of the Leonid meteor shower. The shower will come in daylight for many around the globe. But, if you live anywhere in North America, you should have a good change to see the encounter of Earth with this centuries-old stream of cometary debris.

How do I translate Universal Time to my local time?

As always, the best place to observe is in the country. Get as far from city lights as you can. The moon sets not long after the sun tonight, leaving the critical hours for North American viewers moonless for meteor-watching.

Will you see any? You might. The only way to know is to look. You shouldn’t expect a meteor storm. You might still see only 15 meteors per hour (if you see that many). But there’s a chance for bright meteors during this flare-up of the Leonids on November 20, 2012. So check it out, if you can.

Not in a place to see the shower, or clouded out? You can watch the Leonids meteor shower live online here on Space.com via a telescope feed from NASA’s Marshall Space Flight Center in Huntsville, Alabama.

Bottom line: North American viewers are in a good place to observe a possible final burst of activity from the Leonid meteor shower, which peaked over the weekend. Earth is expected to encounter another debris stream from Comet Tempel-Tuttle – the comet that spawned the Leonid meteors – between 12:30 a.m. and 3 a.m. EST Tuesday morning, November 20. That’s 5:30 to 8 UTC on November 20. Click here to translate UTC to your local time. You might still see only 15 meteors per hour (if you see that many), but there’s a chance for bright meteors during this final flare-up of the Leonids.