Today in science: Launch of Explorer 1

Can you believe it’s been 62 years since the United States launched its 1st satellite? Explorer 1 advanced the space race between the US and the Soviet Union. It led to the discovery of the Van Allen radiation belts. 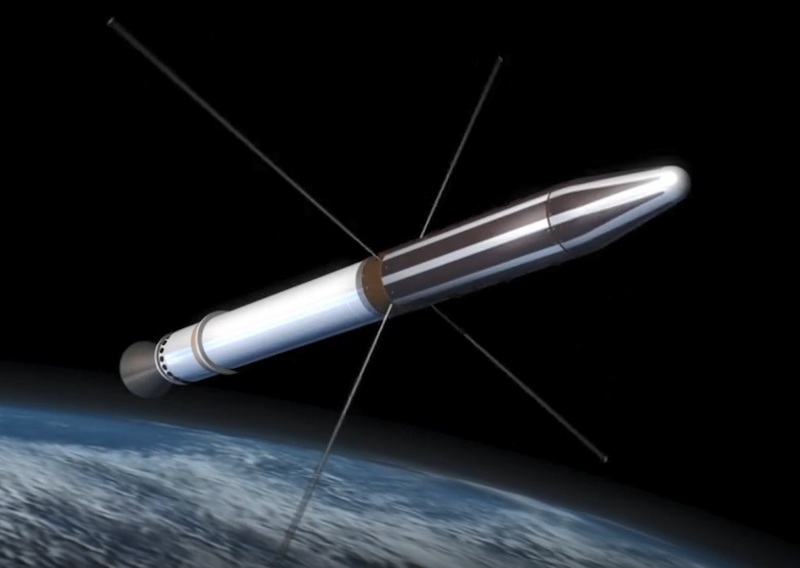 Artist’s concept of Explorer 1 in orbit. Image via NASA.

January 31, 1958. The first U.S. satellite, Explorer 1, was launched into space on this date, about four months after Sputnik 1 became the first satellite to orbit the Earth. The success of Explorer 1’s mission was a critical milestone in the early days of the space race with the former Soviet Union. Explorer 1, the third human-made object in space, also carried scientific instruments that detected the Van Allen Belts that envelope Earth.

Explorer 1 weighed just 30 pounds (14 kilograms) and was under 7 feet long (203 cm). It took 114.8 minutes to complete one orbit of Earth – that’s 12.54 orbits a day. Its orbit dipped as low as 220 miles (354 km) and reached a maximum altitude of 1,563 miles (2,515 km). One scientific instrument onboard, a cosmic ray detector, was designed to take measurements of radiation as the spacecraft orbited Earth. The data it provided led James Van Allen, the mission’s lead scientist, and his team to conclude that they had discovered charged particles trapped by Earth’s magnetic field, a finding that was confirmed in data from other satellites. These zones of trapped charge particles now bear Van Allen’s name.

Explorer 1’s impact was enormous; it helped spur on what was to become an all-out space race. 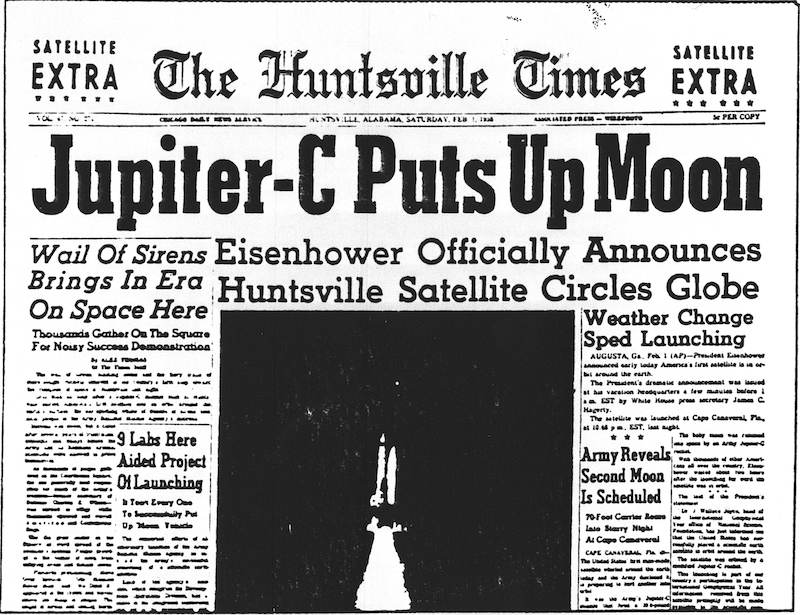 Explorer 1 made the headlines in the Huntsville Times on February 1, 1958. Image via NASA.

Russia had launched Sputnik 1, the world’s first artificial satellite, on October 4, 1957. Explorer 1 was launched in quick response by the U.S. It was designed and built in under three months at the Jet Propulsion Laboratory (JPL) by a team led by William Hayward Pickering. He was JPL’s director for 22 years, until his retirement in 1976.

Explorer 1 was launched with a Jupiter C rocket provided by the U.S Army Ballistic Missile Agency under the guidance of renowned rocket scientist Wernher von Braun. He had worked for the Nazis during World War II, but afterwards began working for the United States. During the Apollo program, von Braun was the chief architect of the Saturn V, the gargantuan rocket that ultimately sent people to the moon.

There were several science instruments aboard Explorer 1: temperature gauges, detectors to detect micrometeorite impacts, and a cosmic ray detector. The latter was to make scientific history by detecting the radiation belts that surrounded Earth, zones of charged particles – mostly electrons and protons – captured from the solar wind by Earth’s magnetic field. 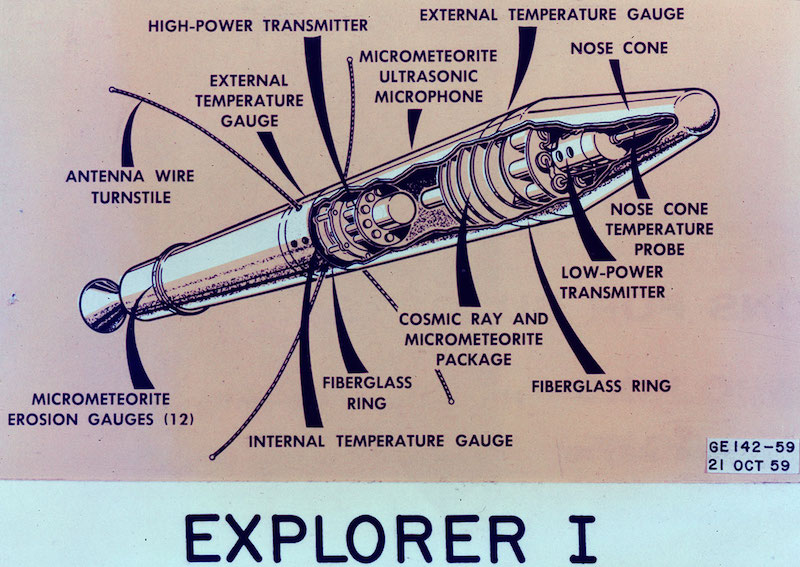 Explorer 1’s cosmic ray detector was built by a team led by James Van Allen at the University of Iowa. As the rocket ascended, Explorer 1 detected expected count rates from cosmic rays. But in orbit, between periods of expected cosmic ray count rates, the scientists were puzzled to see periods of very high counts and zero counts. Adding to the confusion was difficulty in picking up satellite transmissions and tracking the satellite’s orbital path.

Van Allen’s graduate student, Carl McIlwain, suggested that the zero counts could be due to a very high concentration of charged particles that caused the detector to saturate and therefore record zero counts. McIlwain tested and confirmed this idea in a lab by subjecting a similar detector to an intense source of x-rays. That led the scientists to realize they had discovered a belt of charged particles trapped by the Earth’s magnetic field, a hypothesis that had been proposed some time back by other scientists such as Kristian Birkeland and Carl Stoermer.

Another satellite, Explorer 3, was launched only two months later (after Explorer 2 failed). It was almost identical to Explorer 1, but had a tape recorder that was able to replay the cosmic ray detector data back to the ground, providing radiation readings over each orbit. Using this higher quality data, the scientists were able to confirm the presence of a radiation belt.

Subsequent space missions have returned data that better characterizes the Van Allen Belts. There are two main belts: the inner Van Allen Belt typically extends from 620 miles (1,000 kilometers) to 7,500 miles (12,000 kilometers) above the Earth, but may vary based on solar activity. The outer belt can be even more variable in shape and size, usually extending in altitude from 8,100 to 37,300 miles (13,000 to 60,000 kilometers). In February 2013, a third radiation belt was announced. This one was a transient phenomena tied to solar activity. The new temporary belt was discovered by the Van Allen probes, NASA satellites that were deployed to do a detailed study of the the radiation belts. 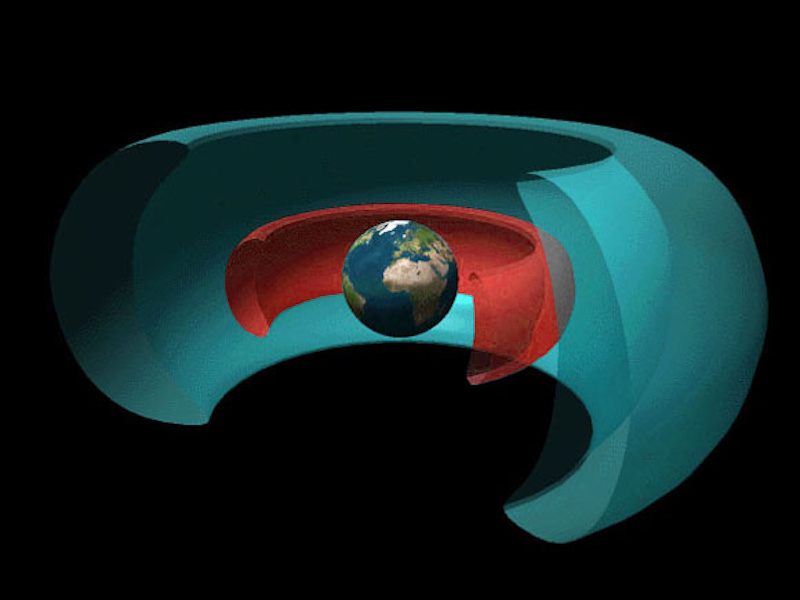 This cutaway drawing shows a three-dimensional view of the two main Van Allen radiation belts: the inner belt (red) dominated by protons and the outer one (blue) by electrons. Image via NASA/ Wikimedia Commons.

Check out this 1958 documentary about the Explorer 1 satellite (28 minutes).

We now know that radiation belts are quite common; other planets in our solar system, like Jupiter, Saturn and Uranus, also have radiation belts similar to Earth’s. Generally speaking, space radiation poses a risk both to astronauts and to spacecraft.

Explorer 1 transmitted data for about four months till its batteries died on May 21, 1958. But it remained in orbit for 12 years, circling 58,376 times around Earth, before burning up upon reentry into the atmosphere on March 31, 1970. 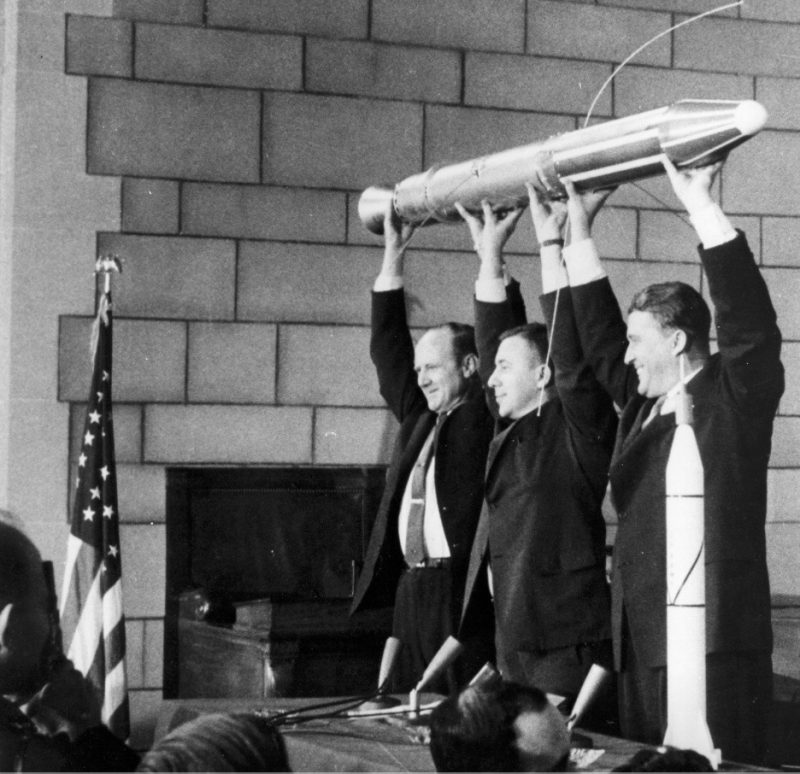 William Picketing, James Van Allen, and German scientist Wernher von Braun (from left to right) hold a model of the first American satellite Explorer 1. This was was taken after the successful launch of the satellite on January 31, 1958, by a Jupiter C rocket at Cape Canaveral, Florida. Image via NASA/ JPL.

Bottom line: Explorer 1 was the first satellite launched by the United States. It was sent into Earth orbit by a Jupiter C rocket on January 31, 1958. It gave the US a big boost in the early days of the U.S.-Soviet space race. This pioneering satellite also carried a scientific instrument that detected what we now know as the Van Allen Belts.