Latest images from NASA’s July 14, 2015 flyby of Pluto by the New Horizons spacecraft, showing evidence of an active surface on Pluto with flowing nitrogen ice. 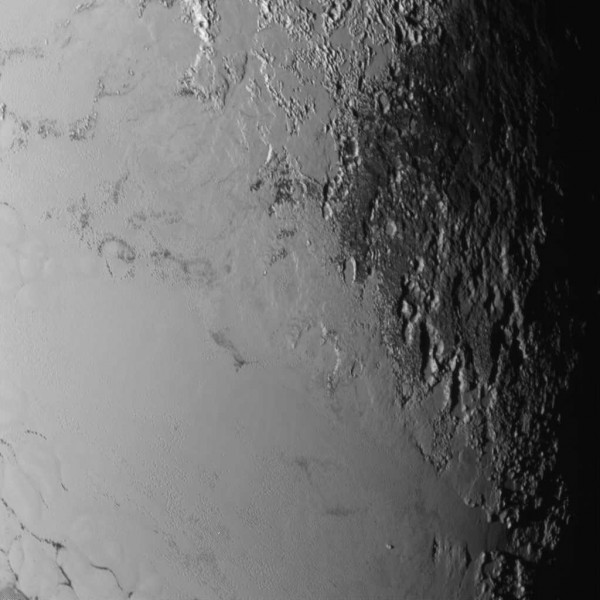 View larger. | Image acquired by New Horizons spacecraft on July 14, 2015 showing a large area near Pluto’s sunset terminator. The image reveals how frozen nitrogen has flowed out from the plains into old, more cratered terrain. The nitrogen ice has flowed like normal water ice does on Earth, in Earth’s coldest places such as Greenland and Antarctica. Image via NASA / JHU-APL / SWRI / New Horizons spacecraft.

The images from New Horizons’ July 14 sweep past Pluto continue to come in. Among the recent discoveries: flowing nitrogen ice on Pluto! These exotic ices flow across Pluto’s at one edge of its bright heart-shaped area. Scientists had hoped to find signs of an active surface on Pluto, but, still, they were wowed by evidence of flowing ice. New Horizons mission co-investigator John Spencer commented in a July 24 statement:

The images – which are still coming in and will continue to arrive at Earth over the coming 18 months – show detail within the Texas-sized plain (informally named Sputnik Planum) that lies within the western half of Pluto’s heart-shaped region, known as Tombaugh Regio.

There, a sheet of ice clearly appears to have flowed—and may still be flowing—in a manner similar to glaciers on Earth. 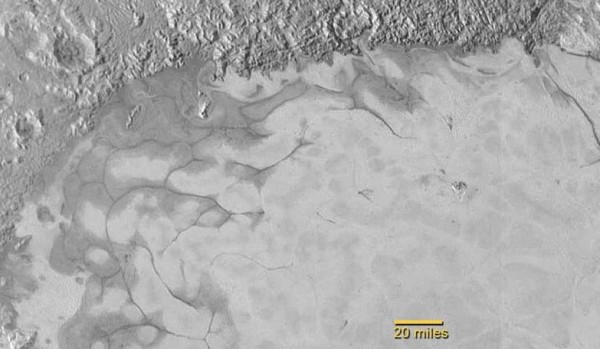 View larger. | In the northern region of Pluto’s Sputnik Planum (Sputnik Plain), swirl-shaped patterns of light and dark suggest that a surface layer of exotic ices has flowed around obstacles and into depressions, much like glaciers on Earth. Image via NASA/JHUAPL/SwRI 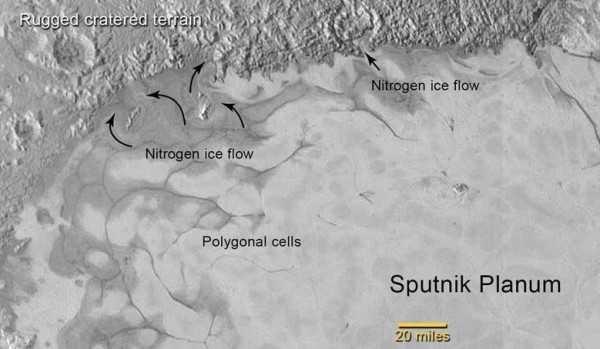 View larger. | Labeled version of the image above. NASA/JHUAPL/SwRI

Above, a simulated flyover of two regions on Pluto, northwestern Sputnik Planum (Sputnik Plain) and Hillary Montes (Hillary Mountains), was created from New Horizons close-approach images. Sputnik Planum has been informally named for Earth’s first artificial satellite, launched in 1957. Hillary Montes have been informally named for Sir Edmund Hillary, one of the first two humans to reach the summit of Mount Everest in 1953. The images were acquired by the Long Range Reconnaissance Imager (LORRI) on July 14 from a distance of 48,000 miles (77,000 kilometers). Features as small as one-half mile (1 kilometer) across are visible. 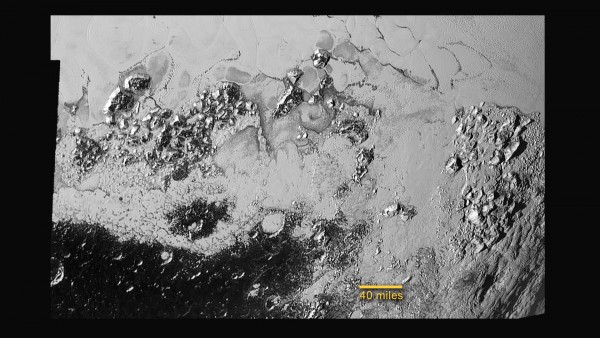 The image above shows New Horizons’ discovery of flowing ices in Pluto’s heart-shaped feature. In the northern region of Pluto’s Sputnik Planum (Sputnik Plain), swirl-shaped patterns of light and dark suggest that a surface layer of exotic ices has flowed around obstacles and into depressions, much like glaciers on Earth. 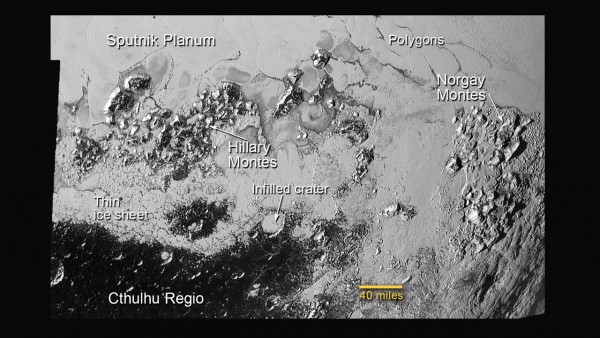 This annotated image of the southern region of Sputnik Planum (above) illustrates its complexity, including the polygonal shapes of Pluto’s icy plains, its two mountain ranges, and a region where it appears that ancient, heavily-cratered terrain has been invaded by much newer icy deposits. The large crater highlighted in the image is about 30 miles (50 kilometers) wide, approximately the size of the greater Washington, DC area. 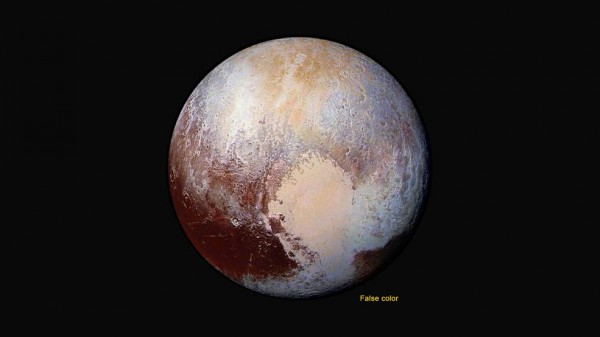 View larger. | Four images from New Horizons’ Long Range Reconnaissance Imager (LORRI) were combined with color data from the Ralph instrument to create this enhanced color global view of Pluto. The lower right edge of Pluto in this view currently lacks high-resolution color coverage. The images, taken when the spacecraft was 280,000 miles (450,000 km) away, show features as small as 1.4 miles (2.2 km). Image via NASA/JHUAPL/SwRI.

Meanwhile, New Horizons scientists are using enhanced color images (see above) to detect differences in the composition and texture of Pluto’s surface. When close-up images are combined with color data from the Ralph instrument, they paint a new and surprising portrait of Pluto in which a global pattern of zones vary by latitude. The darkest terrains appear at the equator, mid-tones are the norm at mid-latitudes, and a brighter icy expanse dominates the north polar region. The New Horizons science team is interpreting this pattern to be the result of seasonal transport of ices from equator to pole. 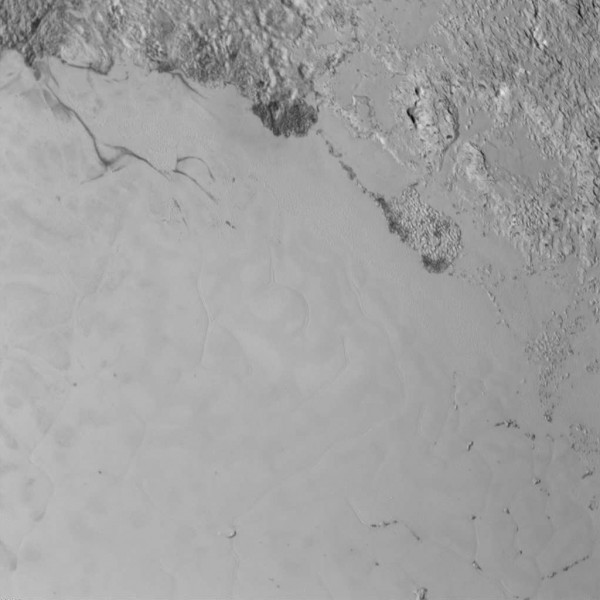 This image, also from July 14, and the following two show the nitrogen ice plains of Sputnik Planum within Tombaugh Regio. Areas shown are approximately 230 miles (370 km) across. All images on this page via New Horizons spacecraft using the LORRI (LOng Range Reconnaissance Imager) camera. 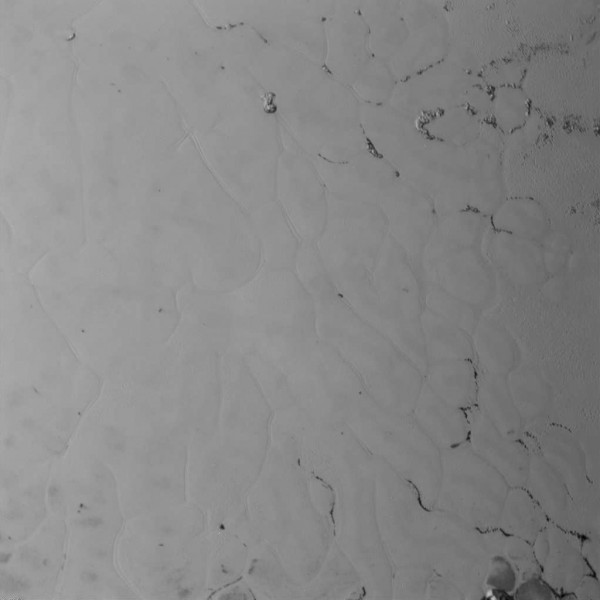 On Pluto, water ice is as hard as solid rock, but nitrogen ice does flow over time at the average surface temperatures on Pluto of minus -386 Fahrenheit (-232 Celsius). Image via NASA / JHU-APL / SWRI. New Horizons spacecraft. 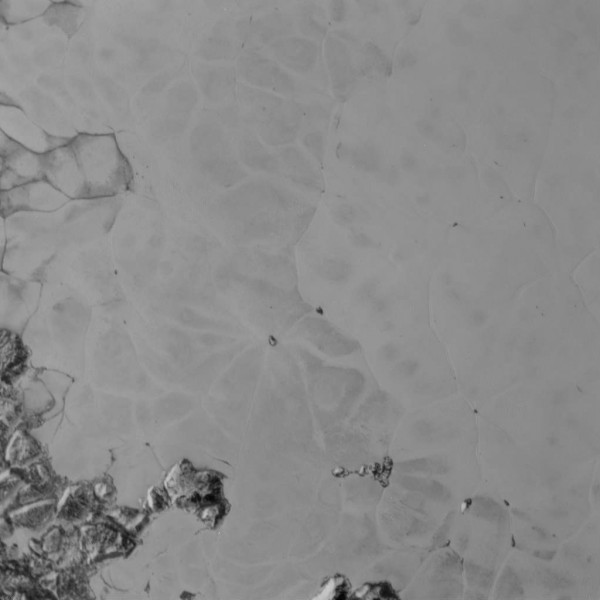 There is also a covering of carbon monoxide and methane ices. Carbon monoxide freezes at -337 Fahrenheit (-205 Celsius), methane freezes at -297 F (-183 C) and nitrogen freezes at -346 F (-210 C). Gives an idea of how cold this location on Pluto is. Image via New Horizons spacecraft using the LORRI (LOng Range Reconnaissance Imager) camera.

Read more from NASA about flowing ice on Pluto