New Hubble image shows the demise of a sunlike star. Our own sun will also burn out and shroud itself with stellar debris, but not for another 5 billion years. 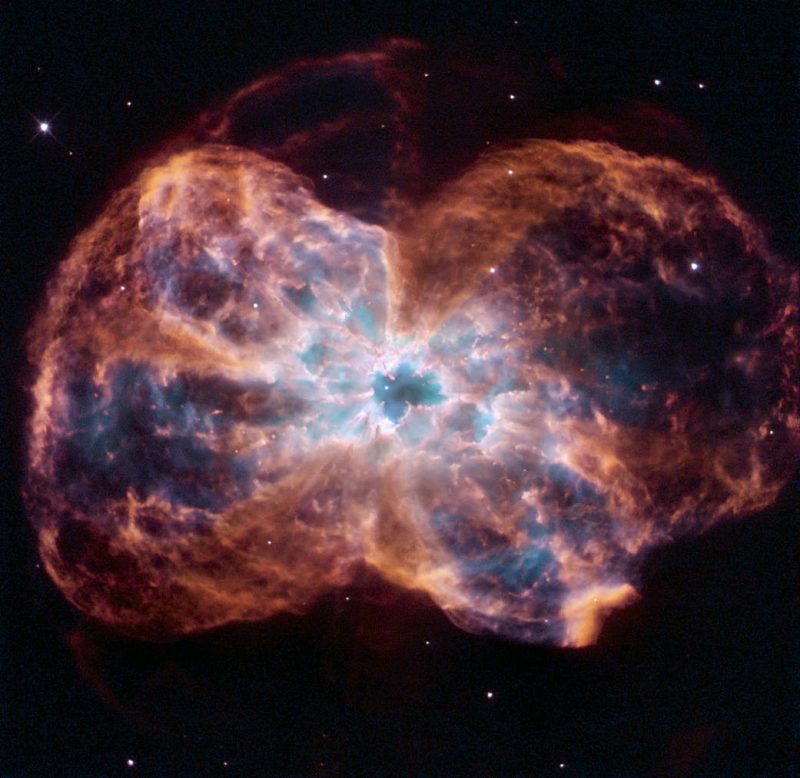 This image, taken by the NASA/ESA Hubble Space Telescope, shows the colorful “last hurrah” of a star like our sun. The burned-out star, called a white dwarf, is the white dot in the center. Our own star, the sun, will also burn out and create a shell of stellar debris, but not for another 5 billion years.

The star is ending its life by casting off its outer layers of gas, which formed a cocoon around the star’s remaining core. Ultraviolet light from the dying star makes the material glow.

The image, released by NASA on September 23, 2016, shows a planetary nebula called NGC 2440, which lies about 4,000 light-years from Earth in the direction of the constellation Puppis.

A planetary nebula is an astronomical object consisting of a glowing shell of gas and plasma that’s formed by certain types of stars at the end of their lives. (Planetary nabulae have nothing to do with planets. They got the name because eighteenth- and nineteenth-century astronomers looking through small telescopes thought they looked like the disks of the planets Uranus and Neptune.) Astronomers estimate that there are about 10,000 of these objects in the Milky Way, although only about 1,500 have been detected so far.

Here’s more from NASA about the image:

The white dwarf at the center of NGC 2440 is one of the hottest known, with a surface temperature of more than 360,000 degrees Fahrenheit (200,000 degrees Celsius). The nebula’s chaotic structure suggests that the star shed its mass episodically. During each outburst, the star expelled material in a different direction. This can be seen in the two bowtie-shaped lobes. The nebula also is rich in clouds of dust, some of which form long, dark streaks pointing away from the star.

The material expelled by the star glows with different colors depending on its composition, its density and how close it is to the hot central star. Blue samples helium; blue-green oxygen, and red nitrogen and hydrogen.

Bottom line: A Hubble Space Telescope image released on September 23, 2016 shows a planetary nebula, called NGC 2440, which lies about 4,000 light-years from Earth in the direction of the constellation Puppis.