Some of the new worlds are similar in size to Earth and orbit in the habitable zone of their parent stars.

Years ago, before the launch of NASA’s Kepler spacecraft, astronomers were thrilled when they discovered a single planet.

Today, the Kepler team announced the confirmation of 715.

Kepler has always been good at finding planets. Even before the announcement, the observatory had confirmed 246 new worlds outside the solar system. The latest discoveries almost quadruple that number.

Kepler works by looking for the slight dimming of starlight caused when a distant planet transits its parent star. Any dip in stellar brightness attracts the attention of the Kepler team, and can prompt them to declare a planet candidate. Verification of candidates can be a laborious process, proceeding slowly, planet-by-planet. 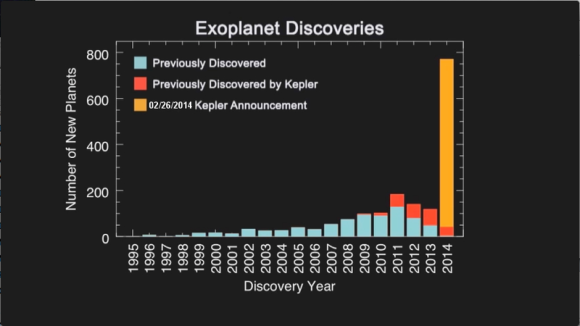 The confirmation of 715 new exoplanets was huge. 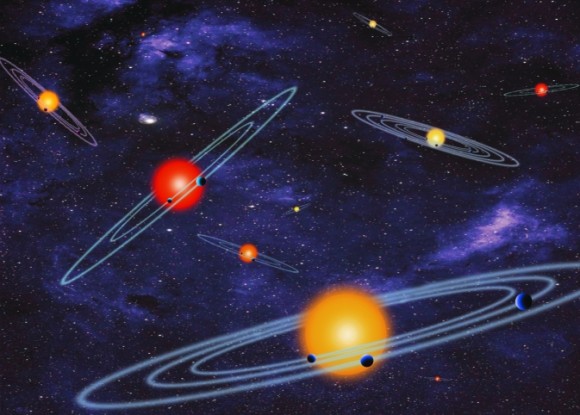 The artist concept depicts multiple-transiting planet systems, which are stars with more than one planet. The planets eclipse or transit their host star from the vantage point of the observer. This angle is called edge-on. Image credit: NASA

Now, however, a research team co-led by Jack Lissauer of the Ames Research Center has figured out a way to speed the process up.

“We’ve developed a procedure to verify multiple planet candidates in bulk to deliver planets wholesale, and have used it to unveil a veritable bonanza of new worlds,” says Lissauer.

The technique is called “verification by multiplicity,” which relies in part on the logic of probability. Out of the 160,000 stars Kepler has observed, a few thousand have planet candidates. But not all candidate systems are equal. A subset of the total, numbering in the hundreds, have not just one but multiple candidates. By concentrating on those busy systems, the team found 715 planets orbiting 305 stars.

The method of multiplicity can be likened to the behavior of lions and lionesses. Suppose that Kepler’s stars are like lions, and the planets are lionesses. If you see two big cats it could be a lion and a lioness or it could be two lions. But if more than two cats are gathered, then it is very likely a lion and his pride. Thus, through multiplicity, the lionesses—or planets—can be reliably identified.

All of the newly-discovered worlds are located in multi-planet systems. Nearly 95 percent of the planets are smaller than Neptune—that is, less than four times the size of Earth. This is a marked increase in the known number of relatively small planets.

“This study shows us that planets in multi-systems tend to be small and their orbits are flat and circular, much like the inner parts of our own solar system,” says Jason Rowe a co-leader of the research at the SETI Institute.

Four of the new planets are less than two-and-a-half times the size of Earth. Moreover, they orbit in their sun’s habitable zone, where the surface temperature of the planets may be suitable for liquid water, a key ingredient for life as we know it.

“The more we explore,” concludes Rowe, “the more we find familiar traces of ourselves amongst the stars that remind us of home.”