The planet-hunting Kepler spacecraft caught the earliest minutes of 2 exploding stars and, for the first time, the flash of supernova shockwave in visible light.

Kepler is NASA’s planet-hunter spacecraft, and it discovered a substantial fraction of the 2,000 known exoplanets, or planets orbiting distant suns. Although Kepler’s place in space history is already assured, the spacecraft has now done something else remarkable. It’s caught the earliest minutes of two exploding stars and, for the first time, the brilliant flash of supernova shockwave — what astronomers call the shock breakout — in visible light.

A supernova is a star that explodes. The shockwave is generated by the collapse of the star’s core inward, as the rest of the star explodes outward. Astronomer Brad Tucker said in a statement from the Australian National University:

It’s like the shockwave from a nuclear bomb, only much bigger, and no one gets hurt.

In the video animation above, you can see an artist’s conception of a red supergiant star 500 hundred times bigger and 20,000 brighter than our sun. NASA said:

When the star’s internal furnace can no longer sustain nuclear fusion its core to collapses under gravity. A shockwave from the implosion rushes upward through the star’s layers. The shockwave initially breaks through the star’s visible surface as a series of finger-like plasma jets. Only 20 minute later the full fury of the shockwave reaches the surface and the doomed star blasts apart as a supernova explosion.

This animation is based on photometric observations made by NASA’s Kepler space telescope.

The international team found a shockwave only in the smaller of two supernovae seen in 2011 to explode. They say this finding will help them understand these star explosions, which are thought to create many of the elements that make up the physical matter we see around us, including our entire planet and our own bodies.

The two supernova started out as red supergiants, stars so huge Earth’s orbit around our sun would fit comfortably within them.

The first star – labeled KSN 2011a by astronomers, located 700 million light years from Earth – was nearly 300 times the size of our sun before it exploded.

The second, labeled KSN 2011d and located around 1.2 billion light years away, was roughly 500 times the size of our sun.

Catching these two supergiant stars just as they erupted wasn’t easy. An international science team led by Peter Garnavich of the University of Notre Dame in Indiana analyzed light captured by Kepler every 30 minutes over a three-year period from 500 distant galaxies, searching some 50 trillion stars. A March 21, 2016, statement from NASA explained:

Whether it’s a plane crash, car wreck or supernova, capturing images of sudden, catastrophic events is extremely difficult but tremendously helpful in understanding root cause.

Just as widespread deployment of mobile cameras has made forensic videos more common, the steady gaze of Kepler allowed astronomers to see, at last, a supernova shockwave as it reached the surface of a star.

The shock breakout itself lasts only about 20 minutes, so catching the flash of energy is an investigative milestone for astronomers.

Read more from NASA about Kepler’s catch of a supernova shockwave. 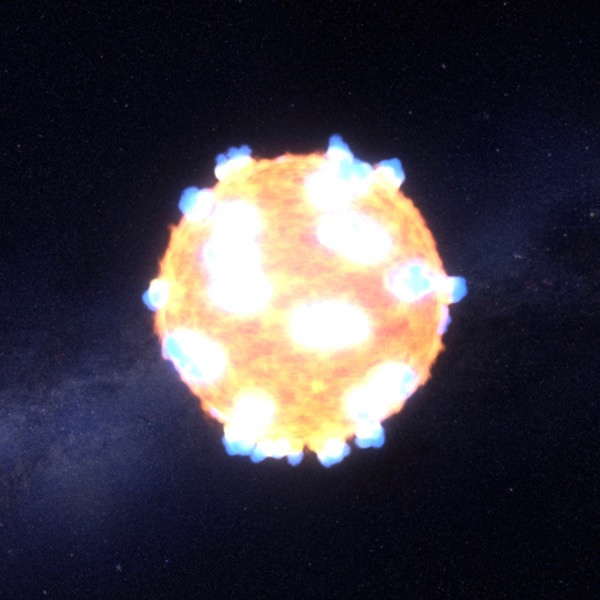 View larger. | NASA’s planet-hunting Kepler spacecraft has caught the earliest minutes of 2 supernovae, and, in one case, a supernova shockwave.

Bottom line: The Kepler spacecraft has caught the brilliant flash of an exploding star’s shockwave — what astronomers call the shock breakout.