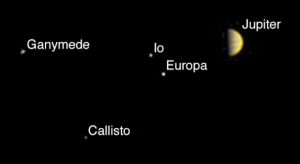 https://www.nasa.gov/feature/jpl/nasas-juno-spacecraft-closing-in-on-jupiter
NASA’s Juno spacecraft obtained this color view on June 21, 2016, at a distance of 6.8 million miles (10.9 million kilometers) from Jupiter. As Juno makes its initial approach, the giant planet’s four largest moons — Io, Europa, Ganymede and Callisto — are visible, and the alternating light and dark bands of the planet’s clouds are just beginning to come into view.
Credits: NASA/JPL-Caltech/SwRI/MSSS

Thank you! Your submission has been received!
Oops! Something went wrong while submitting the form.
END_OF_DOCUMENT_TOKEN_TO_BE_REPLACED