An update on the science coming out of the Juno spacecraft mission to the gas giant planet Jupiter – largest planet in our solar system – and some spectacular recent images. 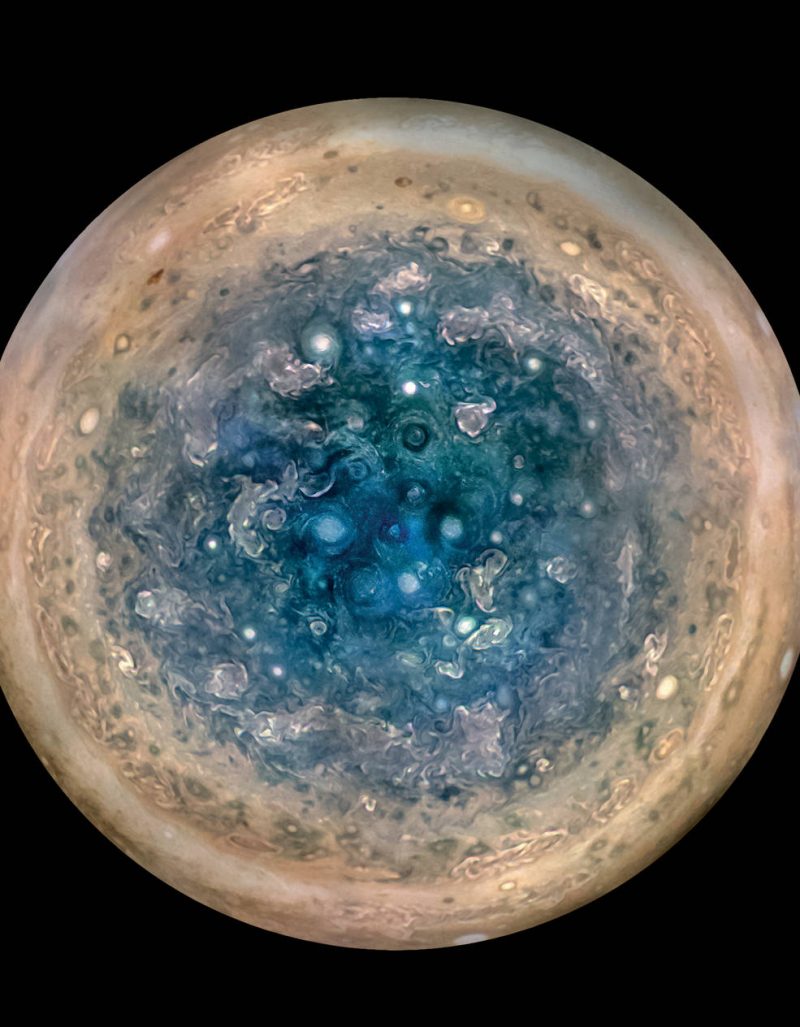 The Juno spacecraft has discovered that Jupiter’s signature bands disappear near its poles. This composite image shows Jupiter’s south pole, as seen by Juno from an altitude of 32,000 miles (52,000 km). The oval features are cyclones, up to 600 miles (1,000 km) in diameter. Multiple images taken with the JunoCam instrument on 3 separate orbits were combined to show all areas in daylight, enhanced color, and stereographic projection. Image via NASA/ JPL-Caltech/ SwRI/ MSSS/ Betsy Asher Hall/ Gervasio Robles.

Scientists associated with the ongoing Juno mission to Jupiter just released a pair of papers, Juno’s first science results. They’re published here and here in a May 25, 2017 edition of the peer-reviewed journal Science. The Juno spacecraft has been in orbit around Jupiter since July, 2016. It’s in a highly elliptical orbit that carries it extremely close to Jupiter, then farther away, so that its passes near the planet occur only once every 53 days. Yet scientist are extremely pleased with the results so far, saying in a recent statement that these results are:

… rewriting what scientists thought they knew about Jupiter specifically, and gas giants in general.

For example, even children drawing the planet Jupiter tend to draw it with brightly colored horizontal bands. But Juno scientists say that Jupiter’s signature bands disappear near its poles. Juno is carrying a camera, called JunoCam, to Jupiter to capture images of Jupiter’s polar regions. JunoCam images show a chaotic scene of swirling storms up to the size of Mars towering above a bluish backdrop, as depicted in the Juno image at the top of this post. 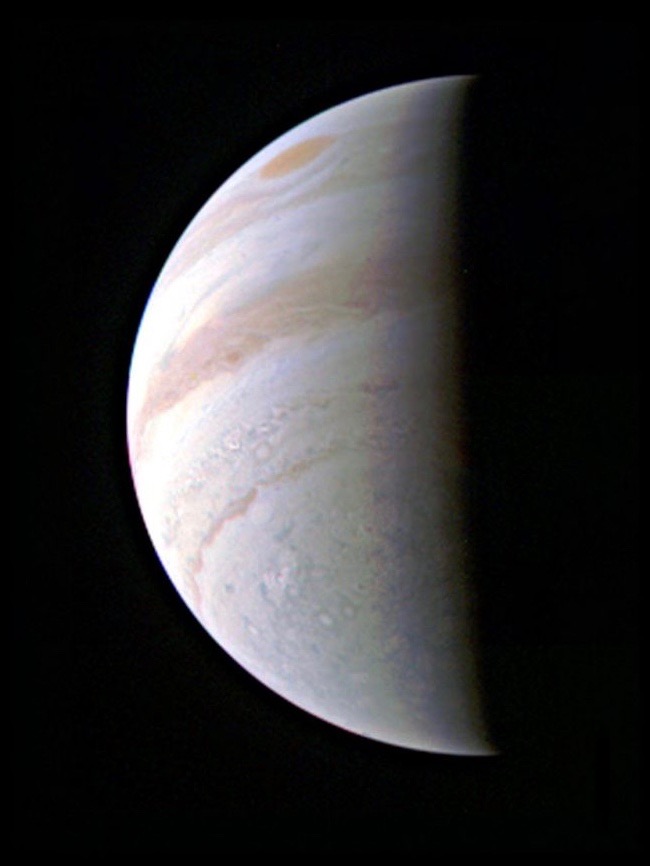 Jupiter’s signature, horizontal colored belts and white zones show up clearly in this photo from Juno, taken on August 27, 2016, during the spacecraft’s 1st orbit around Jupiter, as it approached the planet. Image via NASA/ JPL-Caltech/ SwRI/ MSSS. 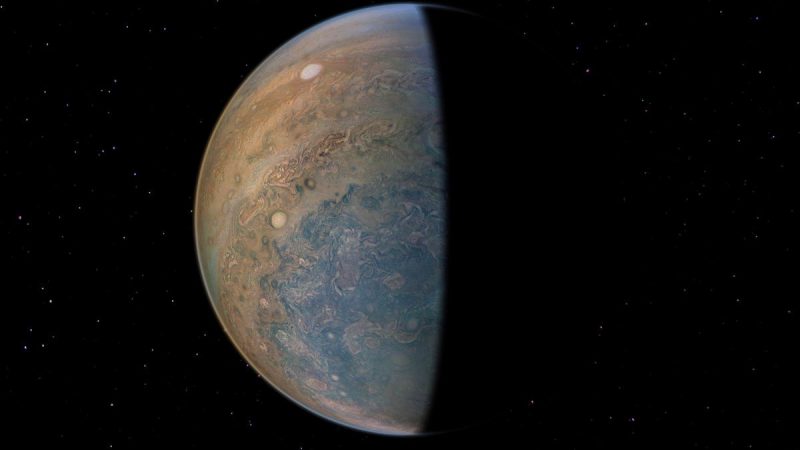 Now check out this image, from Juno’s 3rd orbit, taken from a different vantage point, as the spacecraft began to swing above Jupiter’s pole. Notice: no bands over the pole. Image via NASA/ SwRI/ Bruce Lemons.

Spacecraft began observing Jupiter’s bands many decades ago, and, in all that time, scientists have wondered how far beneath the gas giant’s cloudtops these features persist.

They expected the atmosphere to be uniform at depths greater than 60 miles (100 km). But an instrument aboard Juno called the Microwave Radiometer, scientists have discovered that the atmosphere has variations down to at least 220 miles (350 km), as deep as the instrument can see. At those depths within Jupiter, the atmospheric pressure is some 100 times Earth’s air pressure at sea level. 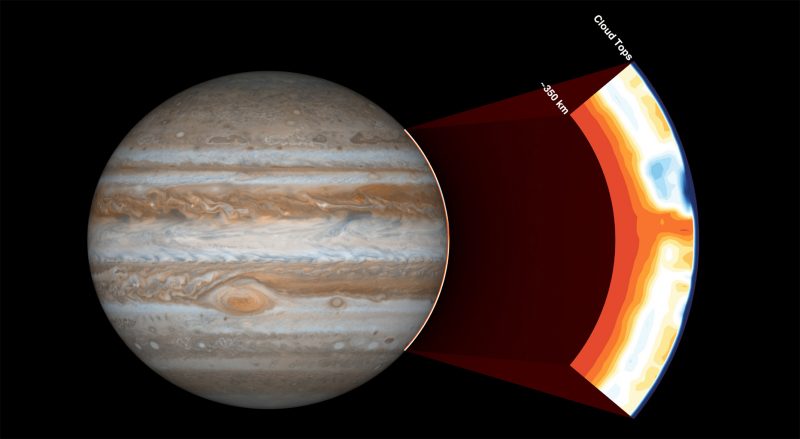 Scott Bolton of the Southwest Research Institute (SwRI) in San Antonio, Texas is Juno’s principal investigator. He explained more about what Juno has revealed about the bands of Jupiter:

… there’s a north-south asymmetry. The depths of the bands are distributed unequally. We’ve observed a narrow ammonia-rich plume at the equator. It resembles a deeper, wider version of the air currents that rise from Earth’s equator and generate the trade winds.

Prior to Juno’s visit, scientists believed that ammonia would be uniformly mixed within Jupiter’s atmosphere. 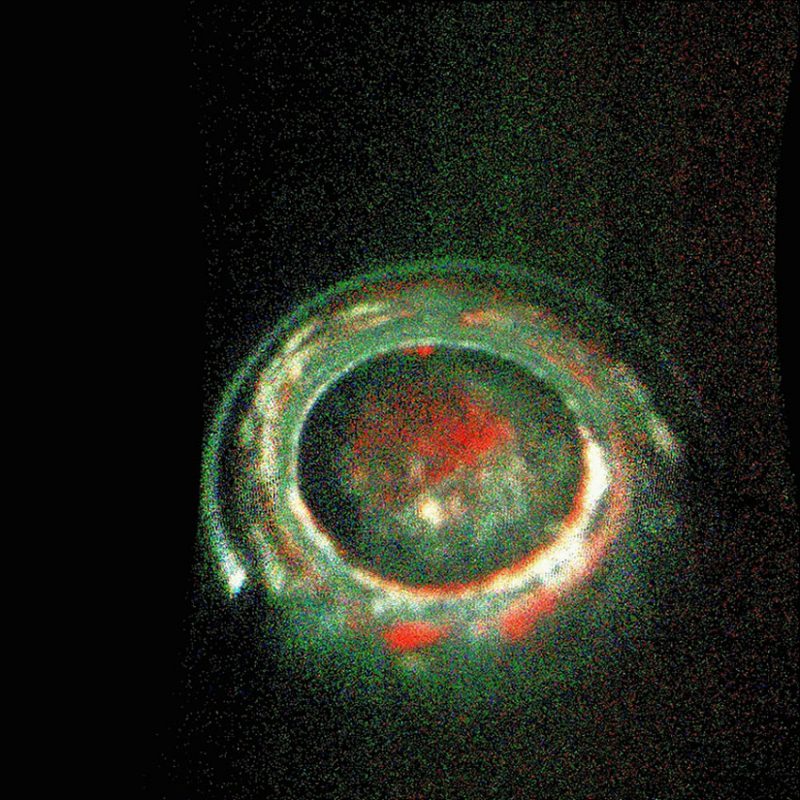 Here are Jupiter’s “southern lights” (also known as auroras), in false-color, from the Juno spacecraft. Click here to see an animation of this image, which is via NASA/ JPL-Caltech/ SWRI. 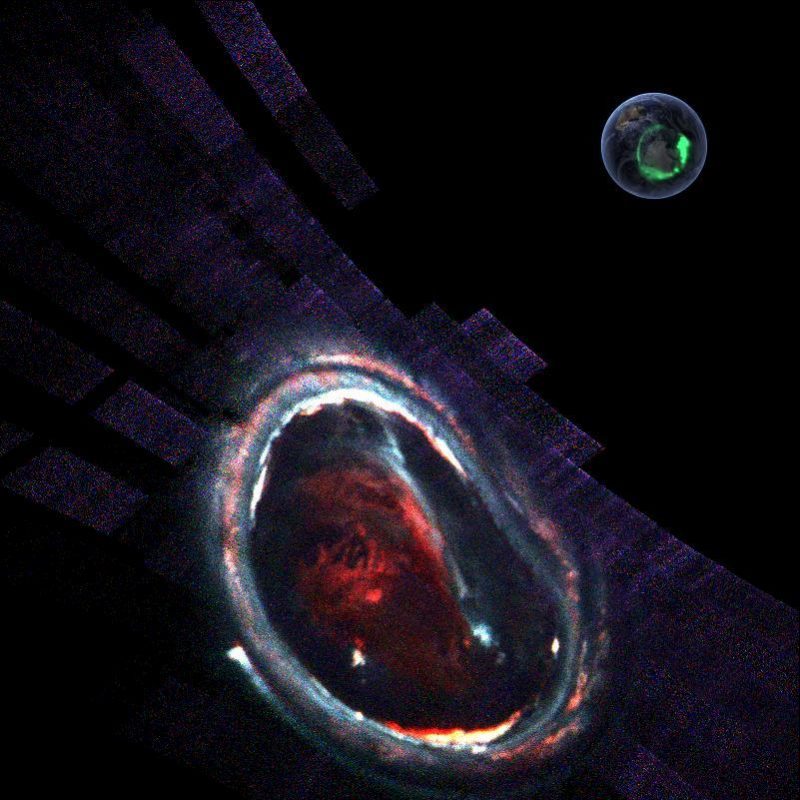 Here’s another false-color image of Jupiter’s southern aurora from Juno, collected during the spacecraft’s 3rd orbit around the planet. The inset at top right is an image of Earth’s south pole aurora, approximately to scale. Image via NASA/ SwRI.

Juno also carries instruments designed to look at its massive auroras. Earth’s auroras (aka the northern and southern lights) come and go with the waxing and waning of activity on the sun, but Jupiter’s auroras are permanent over both poles, though their intensity varies from day to day. Scientists still expected to find similarities to Earth’s auroras, but they’re now saying that Jupiter’s auroras are proving to be more puzzling than they’d anticipated. SwRI’s Phil Valek, who is lead scientist for the JADE instrument on Juno, a set of sensors detecting the electrons and ions associated with Jupiter’s auroras, said:

Although many of the observations have terrestrial analogs, it appears that different processes are at work creating the auroras. With JADE we’ve observed plasmas upwelling from the upper atmosphere to help populate Jupiter’s magnetosphere. However, the energetic particles associated with Jovian auroras are very different from those that power the most intense auroral emissions at Earth.

In order to understand Jupiter’s interior structure and measure the mass of its core, Juno is mapping Jupiter’s gravitational and magnetic fields. Scientists think a dynamo — a rotating, convecting, electrically conducting fluid in a planet’s outer core — is the mechanism for generating the planetary magnetic fields. Bolton gave an indication of early results from Juno in this area when he said:

Juno’s gravity field measurements differ significantly from what we expected, which has implications for the distribution of heavy elements in the interior, including the existence and mass of Jupiter’s core. 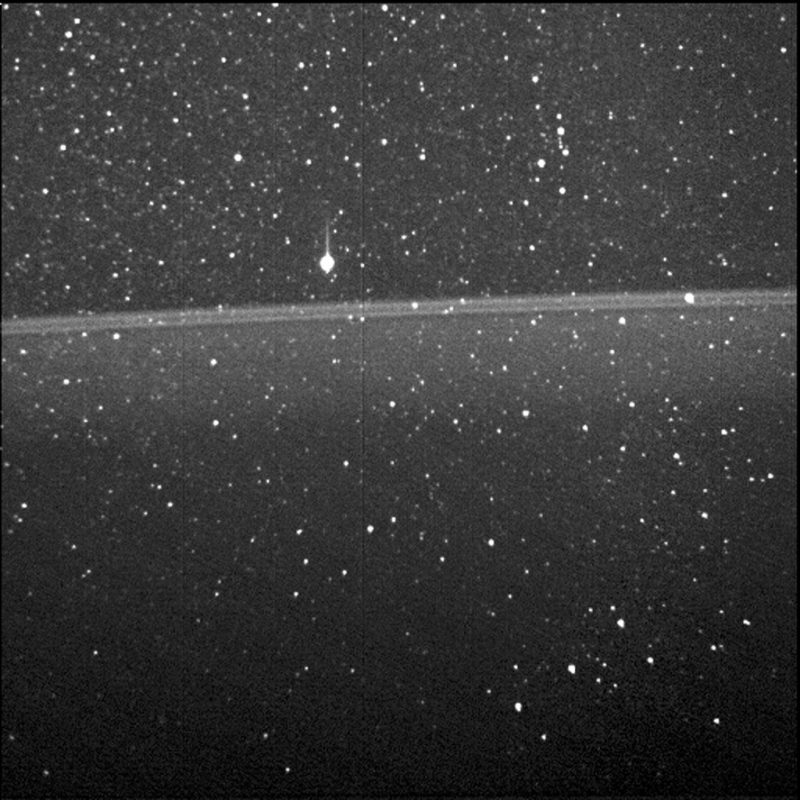 Jupiter’s ring, with constellation Orion. See the 3 famous Belt stars in the lower right? The Stellar Reference Unit (SRU-1) star camera collected this 1st image of Jupiter’s ring taken from the inside looking out. Image via NASA/ JPL-Caltech/ SwRI.

Juno is scheduled to reach the end of its mission during its 37th orbit; so far, it has completed three orbits. The plan is to perform a controlled deorbit of the craft and to let it disintegrate in Jupiter’s atmosphere. This is necessary because the craft is being exposed to high levels of radiation from Jupiter’s magnetosphere, and scientists fear this exposure could cause future failure of certain instruments and risk collision with Jupiter’s moons. The controlled deorbit will eliminate space debris and risks of contamination in accordance with NASA’s Planetary Protection Guidelines.

In the meantime, Juno has dozens more orbits – and a lot more insights – in store. Scott Bolton said:

What we’ve learned so far is Earth-shattering. Or should I say, Jupiter-shattering. Discoveries about its core, composition, magnetosphere, and poles are as stunning as the photographs the mission is generating.

Sequence of a Juno spacecraft close approach to Jupiter. Once every 53 days, the spacecraft sweeps close to Jupiter, speeding to within 3,000 miles (5,000 km) of its equatorial cloudtops. In just two hours, the spacecraft travels from a perch over Jupiter’s north pole through its closest approach (perijove), then passes over the south pole on its way back out. This sequence shows 14 enhanced-color images. Images via NASA.

Bottom line: An update on the science coming out of the Juno spacecraft mission to the gas giant planet Jupiter – largest planet in our solar system – and some spectacular recent images.