Juno spacecraft arrived at Jupiter on July 4 and has spent some weeks in a testing mode. On Saturday, it came closer to Jupiter than any spacecraft ever has. 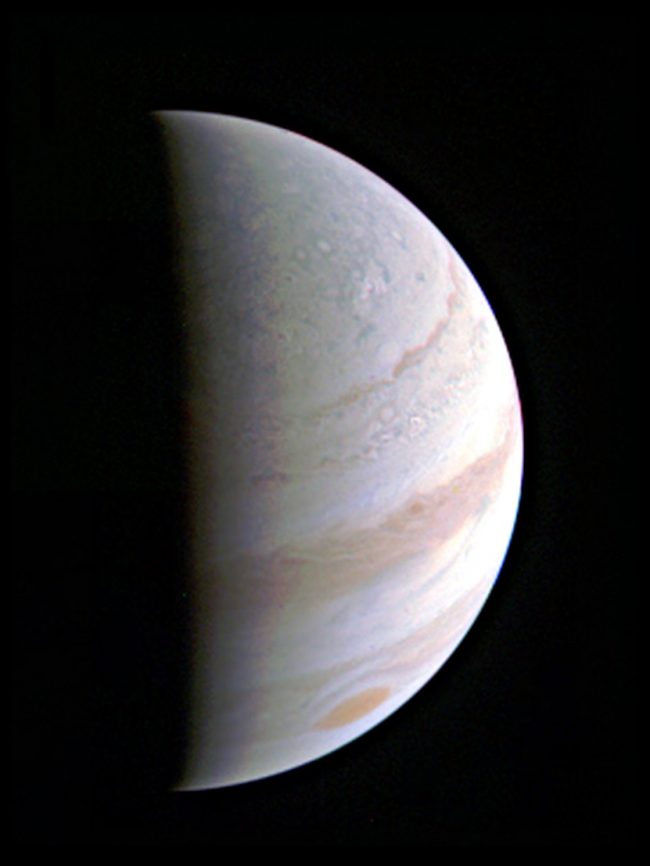 Jupiter’s north polar region is coming into view as NASA’s Juno spacecraft approaches the giant planet. This view of Jupiter was taken on August 27, when Juno was 437,000 miles (703,000 km) away. Image via NASA/JPL-Caltech/SwRI/MSSS.

The recently arrived Juno spacecraft made a successful extremely close pass of Jupiter on Saturday August 27, 2016. Juno swept over Jupiter’s cloudtops with a perijove (closest approach to the giant planet) of only 2,600 miles (4,200 km), by far the closest that an orbiting or flyby spacecraft has ever approached Jupiter. NASA said:

At the time, Juno was traveling at 130,000 mph (208,000 kilometers per hour) with respect to the planet. This flyby was the closest Juno will get to Jupiter during its prime mission.

The spacecraft passed through Jupiter’s intense and deadly radiation belts, in 30 minutes absorbing the amount of radiation that several hundred million people will get in their lifetimes.

Here a half-phase Jupiter is seen with the north pole starting to tilt towards the spacecraft, a totally alien perspective, a viewing angle and phase impossible to see from Earth.

The downloading of data is going very well, according to NASA.

Bottom line: First orbital flyby of Jupiter by the Juno spacecraft was executed successfully on August 27, 2016. There are 35 more close flybys of Jupiter planned during Juno’s mission (scheduled to end in February 2018).