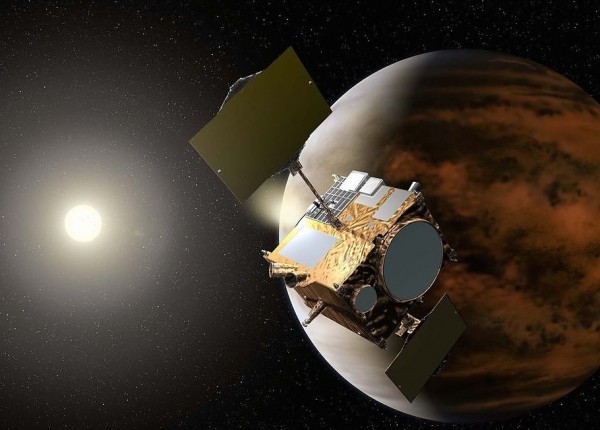 It’s just been confirmed that Japan’s Akatsuki Venus probe – also known as the Venus Climate Orbiter – is in the correct orbit around the planet Venus. This spacecraft has literally been biding its time in space for five years, after missing its orbital insertion slot due to a technical fault in its propulsion system. On Sunday, December 6, the probe conducted a last-chance orbital insertion maneuver, designed to place it in orbit around Venus. The burn lasted 20.5 minutes, and telemetry from the spacecraft indicated it was completed successfully. Doppler tracking showed a change in the spacecraft’s velocity. But Akatsuki’s controllers did not know for several days if the craft is where it needs to be. Today – December 9, 2015 – JAXA confirmed that it is.

Akatsuki (which means Dawn) is intended to explore the atmosphere of Venus and help explain why it’s so different from Earth’s. It was launched on May 20, 2010. It first reached Venus on December 7, 2010, but failed to enter orbit. The probe continued orbiting the sun as JAXA scientists developed and finally carried out plans for yesterday’s orbital-insertion burn.

Since it had lost the use of its main engine, Akatsuki had to fire four of its Reaction Control System thrusters during yesterday’s maneuver, which was the longest burn ever conducted by the vehicle’s small thrusters.

The orbiter is flying in the same direction as that of Venus’s rotation.

JAXA reports that Akatsuki is in good health. They said in a statement:

We will deploy the three scientific mission instruments, namely the 2-micron camera (IR2), the Lightning and Airglow Camera (LAC) and the Ultra-Stable Oscillator (USO), and check their functions.

JAXA will then perform initial observations with the above three instruments along with the three other instruments whose function has already been confirmed, the Ultraviolet Imager (UVI), the Longwave IR camera (LIR), and the 1-micron camera (IR1) for about three months.

At the same time, JAXA will also gradually adjust the orbit for shifting its elliptical orbit to the period of about nine days.

The regular operation is scheduled to start in April 2016.

Bottom line: Congratulations to JAXA and all the scientists who worked on this mission for the successful orbit of Akatsuki – aka the Venus Climate Orbiter – around the planet Venus.