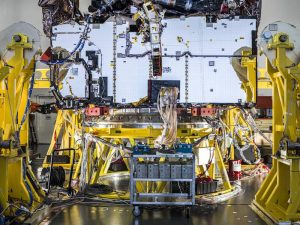 During its final full systems test, technicians powered on all of the James Webb Space Telescope’s various electrical components installed on the observatory, and cycled through their planned operations to ensure each was functioning, and communicating with each other. Image via NASA/ Chris Gunn.

Lia De La Cruz is a Physics graduate and Editorial Assistant of EarthSky, contributing also as a field correspondent with a long-time passion for space exploration that began early in her college career. She started her blog SkyFeed in 2018, which earned a mention in Feedspot’s “Top 50 Space Blogs to Follow," has been published in Smore Magazine, and led her to launch a communications career in tandem with her planetary passion. She currently resides in Southern California with her husband and small pug pup.

Thank you! Your submission has been received!
Oops! Something went wrong while submitting the form.
END_OF_DOCUMENT_TOKEN_TO_BE_REPLACED

The billionaire space race and the Karman line