The James Webb Space Telescope, aka Hubble 2.0, now has its first instrument. The instrument took 10 years and 200 scientists to build.

The first instrument for the James Webb Space Telescope, aka Hubble 2.0, has been completed and handed over to NASA. The instrument, called MIRI (Mid-Infrared Instrument), took 10 years and 200 scientists from the United States and Europe to build.

A labeled diagram of MIRI.

Via a process astronomers call redshifting, light from the most distant (and therefore oldest) objects in the universe reaches us in the infrared part of the spectrum. MIRI is equipped with a camera and spectrograph that allows it to see in the mid-infrared. It is sensitive enough to see a candle on one of Jupiter’s moons from its home orbit beyond Earth’s moon. It also has a coronagraph, designed to block the glare of stars so astronomers can detect any faraway exoplanets and other faint objects.

In a press release from the Max-Planck Institute for Astronomy (MPIA) in Heidelberg, Germany, which designed and built some of MIRI’s components, director Thomas Henning said:

MIRI is sensitive to a particular range of infrared radiation that will allow us to peer inside the clouds where stars and planets are born—and witness such cosmic births in unprecedented detail. We will be able to examine in detail the swirling disks of gas and dust in which planets are forming!

MIRI’s next step is to be transported to the Goddard Space Flight Center in Greenbelt, Maryland, where it will undergo two years of testing and begin the process of integrating with other science instruments and then the telescope optics.

MIRI presented myriad challenges to the team, as explained by Oliver Krause, head of the MPIA’s Infrared Space Astronomy group. In the press release, he said

MIRI is a very versatile instrument—you can insert a number of different filters and other elements that allow MIRI to perform different kinds of measurements, such as taking images and spectra. But when it comes to space telescopes, even something as simple as positioning a filter very precisely in front of a detector is a major challenge. The filter wheel will experience major shaking during the launch of the Ariane 5, and then will need to work very accurately for years on end, without maintenance, at a temperature of -266 degrees Celsius.

That temperature is -446.8 degrees Fahrenheit, or just about 10 degrees above Absolute Zero, the theoretical temperature at which all motion—even that of atoms—ceases. 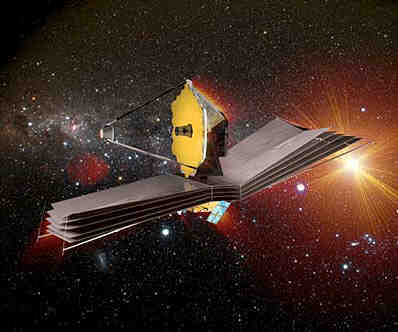 MIRI is one of four science instruments that Webb will carry: the Near Infrared Camera (NIRCAM), the Near Infrared Spectrograph (NIRSPEC), and the Fine Guidance Sensors/Near-Infrared Imager and Slitless Spectrograph (FGS/NIRISS). Together, Webb’s instruments will allow the telescope to peer through dust and gas blocking our view of early star formation, analyze atmospheres on exoplanets, and view some of the oldest objects in the universe—hopefully back to the Big Bang—among other goals.

The James Webb Space Telescope is working at present toward a 2018 launch date.

Bottom line: The James Webb Space Telescope, aka Hubble 2.0, now has its first instrument. The instrument, called MIRI (Mid-Infrared Instrument), took 10 years and 200 scientists from the United States and Europe to build.