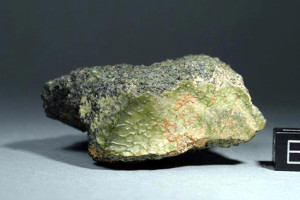 One of 35 meteorites of mysterious origin found in the Moroccan desert. This piece weighs 100 grams. The alphabet block to the right is a centimeter on a side. This object might be a meteorite from Mercury. Image via Washington University in St. Louis.

Thank you! Your submission has been received!
Oops! Something went wrong while submitting the form.
END_OF_DOCUMENT_TOKEN_TO_BE_REPLACED