Is this exotic object an ejected black hole or a huge star?

Is SDSS1133 a supermassive black hole ejected from its home galaxy, or the remains of a massive star that exploded as a supernova? Astronomers aren’t sure. 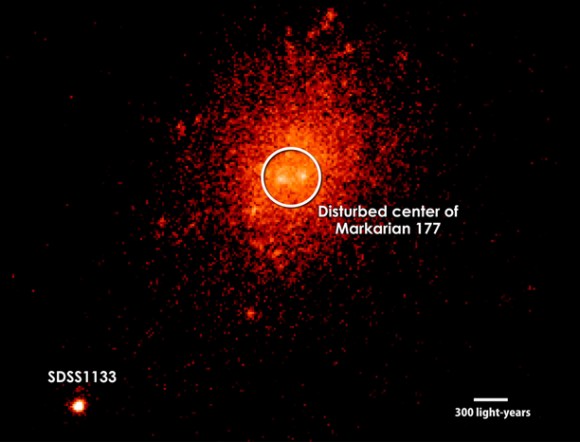 An international team of researchers, analyzing decades of observations from many facilities, has discovered an unusual source of light – an object called SDSS1133 – in a galaxy some 90 million light-years away. The object’s curious properties make it a good match for a supermassive black hole that was ejected from its home galaxy after merging with another giant black hole.

An alternative explanation is just as intriguing. SDSS1133 might be the remains of a massive star called a luminous blue variable (LBV) that exploded as a supernova. These stars undergo episodic eruptions that cast large amounts of mass into space long before their final blast. Interpreted in this way, SDSS1133 would represent the longest period of LBV eruptions ever observed, followed by a terminal supernova explosion in 2001.

The team was led by Michael Koss, now an astronomer at ETH Zurich, the Swiss Federal Institute of Technology. Koss said:

With the data we have in hand, we can’t yet distinguish between these two scenarios.

Whatever SDSS1133 is, it’s persistent. The team was able to detect it in astronomical surveys dating back more than 60 years. The study, an analysis of observations from many facilities, including the W. M. Keck Observatory on Maunakea and the Pan-STARRS1 telescope on Haleakala, as well as NASA’s Swift satellite, will be published in the November 21 edition of Monthly Notices of the Royal Astronomical Society.

The mystery object is part of the dwarf galaxy Markarian 177, located in the bowl of the Big Dipper, a well-known star pattern within the constellation Ursa Major. Although supermassive black holes usually occupy galactic centers, SDSS1133 is located at least 2,600 light-years from its host galaxy’s core.

The researchers report that SDSS1133 has brightened significantly during the past six months, a trend that, if maintained, would bolster the black hole interpretation.Whether it’s a rogue supermassive black hole or the closing act of a rare star, it seems astronomers have never seen the likes of SDSS1133 before.

Bottom line: In an analysis of 60 years of observations, an international team of astronomers have discovered an exotic source of light. The object – called SDSS1133 – might be a supermassive black hole ejected from its home galaxy, or the remains of a massive star that exploded as a supernova. Astronomers aren’t sure.