Is dark matter made of black holes?

What if if dark matter consisted of a population of black holes similar to those detected by LIGO last year? A new study analyzes this possibility. 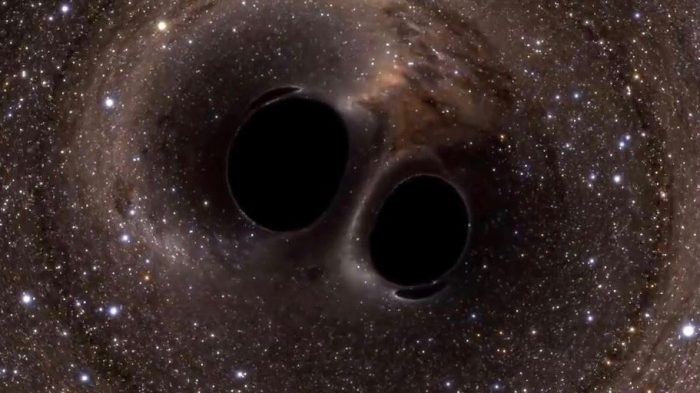 Modern astronomers believe a substantial portion of our universe exists in the form of dark matter. Like all matter, dark matter appears to exert a gravitational pull, but it can’t be seen. If it exists, it emits neither light nor any other form of radiation that scientists have detected. Scientists have favored theoretical models using exotic massive particles to explain dark matter, but so far there’s no observational evidence that this is the case. On May 24, 2016, NASA announced a new study bolstering the idea of an alternative hypothesis: dark matter might be made of black holes.

Alexander Kashlinsky, an astrophysicist at NASA Goddard, led the new study, which he said is:

… an effort to bring together a broad set of ideas and observations to test how well they fit, and the fit is surprisingly good. If this is correct, then all galaxies, including our own, are embedded within a vast sphere of black holes each about 30 times the sun’s mass.

There are several ways to form black holes, but they all involve high densities of matter. The black holes of Kashlinsky’s study are what are called primordial back holes, thought to have formed in the first fraction of a second after the Big Bang, when pressures and temperatures were extremely high. During this time, tiny fluctuations in the density of matter might have pocked the early universe with black holes, and, if so, as the universe expanded, those primordial black holes would have remained stable, existing until our time.

In his new paper, Kashlinsky points to two primary lines of evidence that these black holes can account for the missing dark matter thought to pervade our universe. His statement explains that this idea:

… aligns with our knowledge of cosmic infrared and X-ray background glows and may explain the unexpectedly high masses of merging black holes detected last year [by LIGO]. 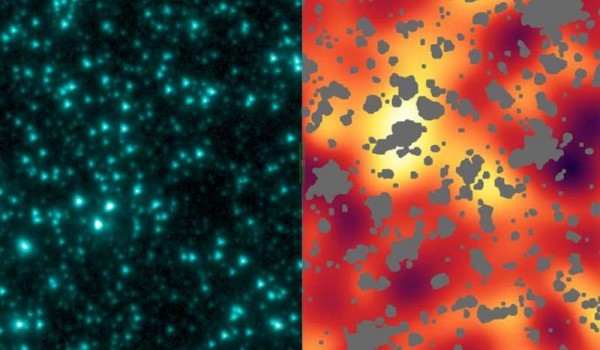 The first line of evidence is an excessive patchiness in the observed background glow of infrared light.

In 2005, Kashlinsky led a team of astronomers using NASA’s Spitzer Space Telescope to explore this infrared background glow in one part of the sky. His team concluded that the observed patchiness was likely caused by the aggregate light of the first sources to illuminate the universe more than 13 billion years ago. Then the question becomes … what were these first sources? Were primordial black holes among them?

… the irregular glow of low-energy X-rays in the [cosmic x-ray background] matched the patchiness of the [infrared background] quite well. The only object we know of that can be sufficiently luminous across this wide an energy range is a black hole.

The 2013 study concluded that primordial black holes must have been abundant among the earliest stars, making up at least about one out of every five of the sources contributing to the cosmic infrared background.

Now move forward to September 14, 2015, and Kashlinsky’s second line of evidence that primordial black holes make up dark matter. That date – now marked in the history of science – is when scientists at the the Laser Interferometer Gravitational-Wave Observatory (LIGO) facilities in Hanford, Washington, and Livingston, Louisiana made a first-ever, extremely exciting detection of gravitational waves. A pair of merging black holes 1.3 billion light-years away is thought to have produced the waves detected by LIGO last September 14. The waves are ripples in the fabric of space-time, moving at light speed.

In addition to being the first-ever detection of gravitational waves, and assuming the LIGO event has been interpreted correctly, this event also marked the first direct detection of black holes. As such, it gave scientists information about the masses of the individual black holes, which were 29 and 36 times the sun’s mass, plus or minus about four solar masses.

Primordial black holes, if they exist, could be similar to the merging black holes detected by the LIGO team in 2015. This computer simulation shows in slow motion what this merger would have looked like up close. The ring around the black holes, called an Einstein ring, arises from all the stars in a small region directly behind the holes whose light is distorted by gravitational lensing. The gravitational waves detected by LIGO are not shown in this video, although their effects can be seen in the Einstein ring. Gravitational waves traveling out behind the black holes disturb stellar images comprising the Einstein ring, causing them to slosh around in the ring even long after the merger is complete. Gravitational waves traveling in other directions cause weaker, shorter-lived sloshing everywhere outside the Einstein ring. If played back in real time, the movie would last about a third of a second. Image via SXS Lensing.

In his new paper, published May 24, 2016 in The Astrophysical Journal Letters, Kashlinsky analyzes what might have happened if dark matter consisted of a population of black holes similar to those detected by LIGO. His statement concluded:

The black holes distort the distribution of mass in the early universe, adding a small fluctuation that has consequences hundreds of millions of years later, when the first stars begin to form.

For much of the universe’s first 500 million years, normal matter remained too hot to coalesce into the first stars. Dark matter was unaffected by the high temperature because, whatever its nature, it primarily interacts through gravity. Aggregating by mutual attraction, dark matter first collapsed into clumps called minihaloes, which provided a gravitational seed enabling normal matter to accumulate. Hot gas collapsed toward the minihaloes, resulting in pockets of gas dense enough to further collapse on their own into the first stars. [Our team] shows that if black holes play the part of dark matter, this process occurs more rapidly and easily produces the lumpiness of the [infrared background] detected in Spitzer data even if only a small fraction of minihaloes manage to produce stars.

As cosmic gas fell into the minihaloes, their constituent black holes would naturally capture some of it too. Matter falling toward a black hole heats up and ultimately produces X-rays. Together, infrared light from the first stars and X-rays from gas falling into dark matter black holes can account for the observed agreement between the patchiness of the [infrared background] and the [cosmic x-ray background].

Occasionally, some primordial black holes will pass close enough to be gravitationally captured into binary systems. The black holes in each of these binaries will, over eons, emit gravitational radiation, lose orbital energy and spiral inward, ultimately merging into a larger black hole like the event LIGO observed.

Bottom line: On May 24, 2016, NASA announced a new study by Alexander Kashlinsky, an astrophysicist at NASA Goddard, bolstering the idea that dark matter is made of black holes.