Look around from Mars rover’s point of view

Here’s what the Curiosity rover is seeing after 7 years on Mars. Curiosity captured this 360-degree interactive panorama on June 18.

NASA’s Curiosity rover captured the 360-degree panorama, above, on June 18, 2019. The location, called “Teal Ridge,” is part of a larger region the rover has been exploring, which scientists call the “clay-bearing unit.”

The Curiosity rover landed on Mars seven years ago (August 6, 2012). Since then, it’s traveled a total of 13 miles (21 km) and ascended 1,207 feet (368 meters) to its current location. Scientists are looking for signs that Mars could have supported microbial life billions of years ago, when rivers and lakes could be found in Gale Crater.

Curiosity is now halfway through clay-bearing unit, which is on the side of Mount Sharp, inside Gale Crater. Rock samples that the rover has drilled here have revealed the highest amounts of clay minerals found during the mission.

Billions of years ago, says NASA, there were streams and lakes within the crater. Water changes the sediment that was deposited in the lakes, leaving behind lots of clay minerals in the region. Kristen Bennett of the U.S. Geological Survey is one of the co-leads for Curiosity’s clay-unit campaign. She said:

This area is one of the reasons we came to Gale Crater. We’ve been studying orbiter images of this area for 10 years, and we’re finally able to take a look up close. 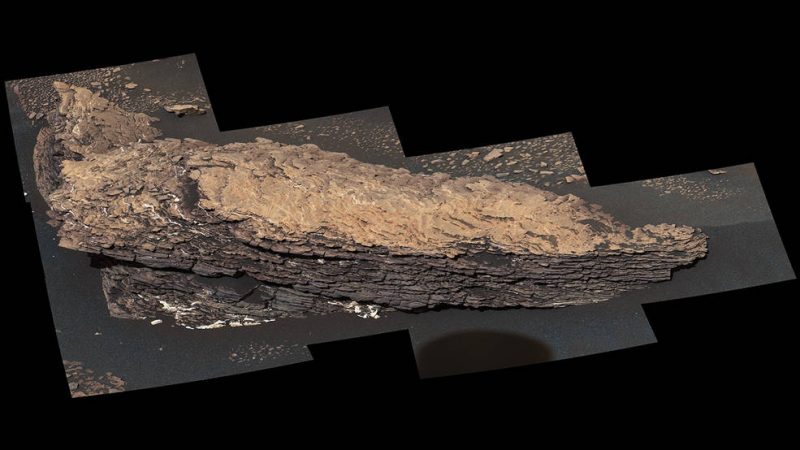 This mosaic of images shows a boulder-sized rock called “Strathdon,” which is made up of many complex layers. NASA’s Curiosity Mars rover took these images using its Mast Camera, or Mastcam, on July 9, 2019. Image via NASA/JPL-Caltech/MSSS. 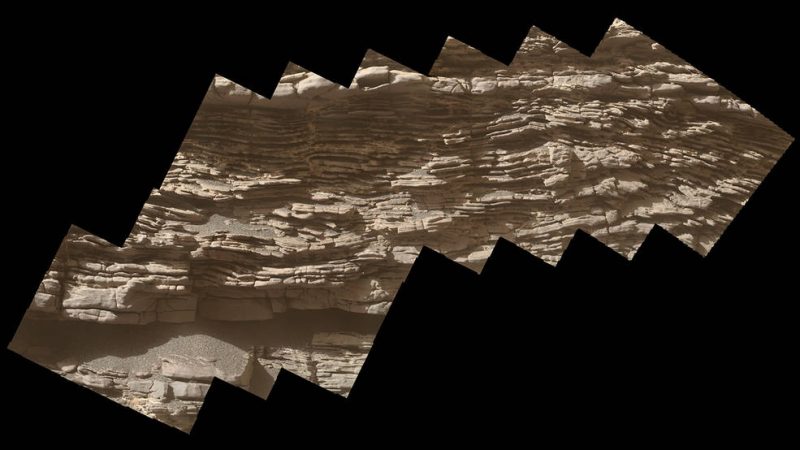 This mosaic of images shows layers of sediment on a boulder-sized rock called “Strathdon,” as seen by the Mars Hand Lens Imager (MAHLI) camera carried by NASA’s Curiosity rover. The images were taken on July 10, 2019. Image via NASA/JPL-Caltech/MSSS.

In July, Curiosity took detailed images of “Strathdon,” a rock made of dozens of sediment layers that have hardened into a brittle, wavy heap. Unlike the thin, flat layers associated with lake sediments, the wavy layers in the rock suggest a more dynamic environment, say NASA scientists. Wind, flowing water or both could have shaped this area.

According to Caltech’s Valerie Fox, the other campaign co-lead, both Teal Ridge and Strathdon represent changes in the landscape. She said:

We’re seeing an evolution in the ancient lake environment recorded in these rocks. It wasn’t just a static lake. It’s helping us move from a simplistic view of Mars going from wet to dry. Instead of a linear process, the history of water was more complicated.