Insights from space rocks left after meteor exploded over Russia

Extensive laboratory studies of the Chelyabinsk meteorites revealed traces of ancient space collisions even more violent than the recent encounter with Earth.

Scientists from the Czech Republic, Finland, and the Russian Federation are presenting new findings today (October 8, 2013) on meteorites, or rocks from space, recovered after the Chelyabinsk fireball that exploded over Russia on February 15, 2013. The report is being presented to the American Astronomical Society Division for Planetary Sciences meeting in Denver, Colorado. The studies of these meteorites have revealed traces of other space collisions and serve as a reminder of the existing threat of asteroid impacts for our civilization, according to these scientists.

The results are of special interest because they not only shed light on potentially hazardous impacts of asteroids on Earth, but also on more violent space collisions which disrupted ancient protoplanets in the early solar system into smaller asteroids we observe today. Dr. Maria Gritsevich (Finnish Geodetic Institute and Russian Academy of Science) and Dr. Tomas Kohout (University of Helsinki, Finland, and Academy of Sciences of the Czech Republic) are presenting the report. 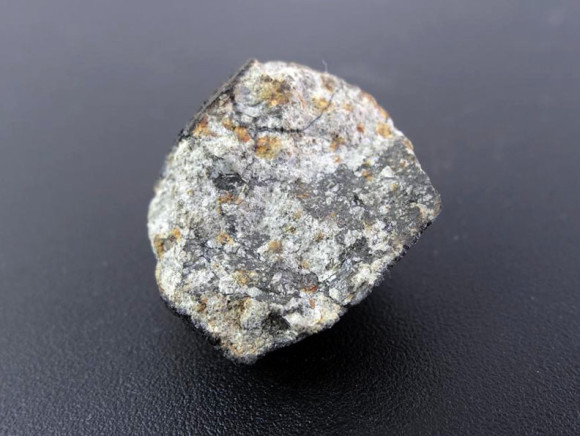 A cut-open Chelyabinsk specimen shows a light texture with darker patches of shocked or impact-melted minerals. When meteorite minerals like olivine are shocked by impact, chemical changes occur that make them darken. Photo by meteorite hunter Evgenij Suhanov. Photo and caption via AstroBob.

The Chelyabinsk daylight fireball, which crossed the sky over Southern Ural in Russia on February 15, 2013, was the largest extraterrestrial body impacting the Earth since the Tunguska event in 1908. The atmospheric entry of the Chelyabinsk asteroid was observed by many witnesses, and the associated air blast caused significant damage including numerous broken windows and partial building collapses in the city of Chelyabinsk and the surrounding territories.

The asteroid was only about 20 meters (about 22 yards) in diameter, but it disintegrated upon its hypervelocity atmospheric entry, releasing energy of 440 kilotons of TNT, equal to 20-30 times the energy of the nuclear bomb that detonated over Hiroshima. “Such large asteroids collide with Earth approximately once in 100 years. They come usually without any warning and can cause significant local damage,” says Dr. Gritsevich, a scientist at the Finnish Geodetic Institute and the Russian Academy of Science. “Luckily for the residents of the Chelyabinsk region, the asteroid disintegrated high in the atmosphere, saving the Earth this time from a more catastrophic impact,” Dr. Gritsevich adds.

Extensive laboratory studies of the Chelyabinsk meteorite material revealed traces of ancient space collisions even more violent than the recent encounter with the Earth. While some meteorite rocks are bright gray with minor traces of space collisions, others contain signs of extensive impact-related melting and crushing. Some of them were even turned dark black. The dark black (so called shock-darkened) meteorite pieces experienced high pressure loads sufficient to entirely crush the mineral grains and melt metallic material. The molten iron filled tiny fractures within the silicate mineral grains making them to appear black.

The presence of rocks originating from a single asteroid, but modified by space collisions to varying extent, makes the Chelyabinsk meteorites exceptional. They allowed the scientists to study how space collisions change the appearance of asteroid surfaces and interiors.

A major difference between the bright gray and shock-darkened meteorites was observed in laboratory measurements of their reflectance spectra (spectra of reflected visual-to-short-wave-infrared light). The bright gray Chelyabinsk meteorite spectra show the presence of silicate minerals such as olivine and pyroxene similarly to other ordinary chondrites. However, the shock-darkened black meteorites have dark featureless spectra because the silicates are obstructed by molten metal. “These dark meteorites are exciting rocks to study. Their spectrum and composition is masked by ancient space collisions. There are many dark asteroids with featureless spectra in our solar system. Some people think that they may be formed of rocks rich in carbon and organic matter. But they can be also made of shock-darkened ordinary chondrites similar to the dark Chelyabinsk meteorites,” says Dr. Kohout, a scientist at the University of Helsinki, Finland, and the Academy of Sciences of the Czech Republic. “It may explain why we cannot identify the composition of dark asteroids. We need spacecraft to visit asteroids and return samples back to our laboratories,” Dr. Kohout adds.

These scientists concluded, “The Chelyabinsk event reminds us of the existing threat of asteroid impacts for our civilization. Additionally, the study of the Chelyabinsk meteorites reveals even more powerful ancient collisions that occurred in the early solar system and caused some asteroids to appear dark. Despite their obstructed dark spectra, these dark asteroids can be linked to the ordinary chondrite meteorites found on the Earth.”