Insights from MESSENGER spacecraft after one year in orbit

The MESSENGER spacecraft completed its one-year primary mission in orbit around the planet Mercury on March 17, 2012. New findings released today.

University of California Santa Barbara and Johns Hopkins University in Baltimore both released information today (March 22, 2012) about the MESSENGER spacecraft, which completed its one-year primary mission in orbit around the planet Mercury on March 17.

MESSENGER captured nearly 100,000 images of Mercury. It recorded data shedding new insights on the planet’s core, topography, and what scientists say is mysterious radar-bright material – possibly water-ice – in the permanently shadowed areas near the poles of this innermost planet in orbit around our sun. The findings are presented in two papers published online on March 21, 2012 in Science Express. You’ll find abstracts to the two papers here and here. 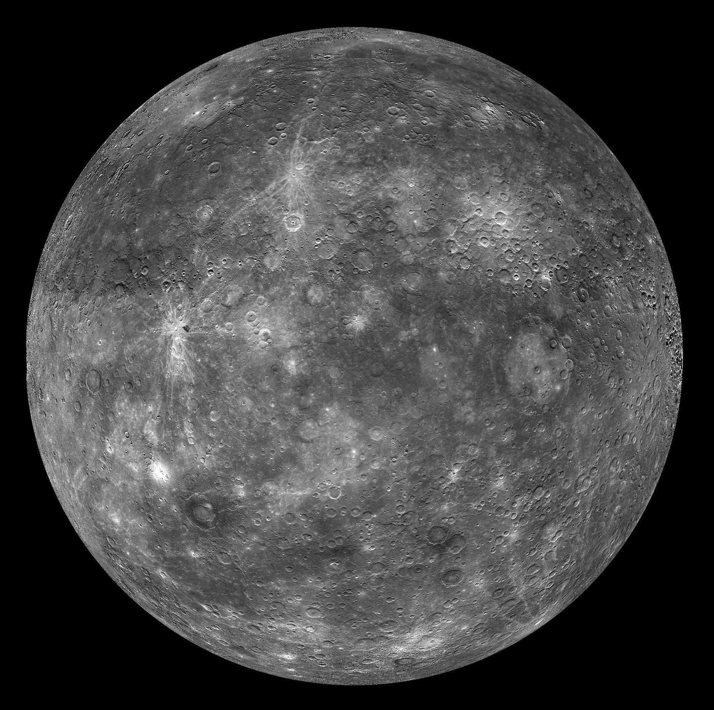 Mercury, as seen by the spacecraft MESSENGER.

Mercury’s core is larger than expected – almost 85 percent of the planetary radius. In contrast, Earth’s core is just over half of our planet’s radius. Plus, Mercury’s core appears to be more complex core than that of Earth. It has a solid iron sulfide layer that is now part of the mantle, which encases a liquid core, which may float on a solid inner core, the scientists say.

Mercury’s solid outer core and liquid inner core contain more iron than Earth, relative to the whole planet, which influences the way Mercury’s magnetic field was generated. But the surface is comprised of lighter elements. UC Santa Barbara physics professor emeritus Stanton Peale, who devised the procedure used for detecting whether or not Mercury had a liquid core, said:

We didn’t expect so much sulfur.

He said the presence of so much sulphur on the planet’s surface indicates that Mercury’s formation wasn’t as “orderly” as some scientists had previously assumed. In other words, if you picture the original solar nebula from which our sun and planets are thought to have formed, it makes sense to think that Mercury formed from materials in the inner part of the nebula, since Mercury is the sun’s innermost planet. But Peale said:

Mercury is composed of material that had condensed over a wide range from the sun.

And that’s cool and mysterious.

The spread in elevations on Mercury surface are small, compared to those of Mars or Earth’s moon, according to a precise topographic model of the planet’s northern hemisphere made possible by the MESSENGER spacecraft.

Radar-bright features at Mercury poles are located in areas of permanent shadow. They might indicate the presence of water-ice. That idea will be tested further with MESSENGER’s neutron spectrometer.

MESSENGER is already on the next phase of its investigations: an extended year-long mission that includes more comprehensive and more targeted measurements.

By the way, MESSENGER stands for MErcury Surface, Space Environment, GEochemistry, and Ranging.