Spectacular video shows last week’s total solar eclipse from a redirected Alaska Airlines flight. Wish we all could have been there!

Alaska Airlines was good enough to redirect Flight #870 from Anchorage to Honolulu last Tuesday (March 8, 2016) so that passengers could enjoy a view of a total solar eclipse from 35,000 feet in the air. The result was spectacular, as you can see from the video above, which is by Mike Kentrianakis of the American Astronomical Society. Notice the beginning of the video, when the moon’s shadow is moving across the cloudtops, toward the camera!

The change in flight plans started a year ago, when astronomer Joe Rao – associate astronomer at the American Museum of Natural History’s Hayden Planetarium – realized that the eclipse’s path would intersect with his flight path — almost half an hour before his flight arrived, according to Alaska Airlines blog.

Rao called the airline, and officials decided to adjust the flight so passengers could experience the eclipse from the air.

The flight held about a dozen astronomers and eclipse chasers, along with about 150 other passengers.

Read more about the video and the experience of the passengers at Alaska Airlines’ blog.

By the way, in the video, you’ll see many shining points besides the sun. These aren’t really objects in the sky. They are lens flares, internal reflections from the video camera. Read more about lens flare here. 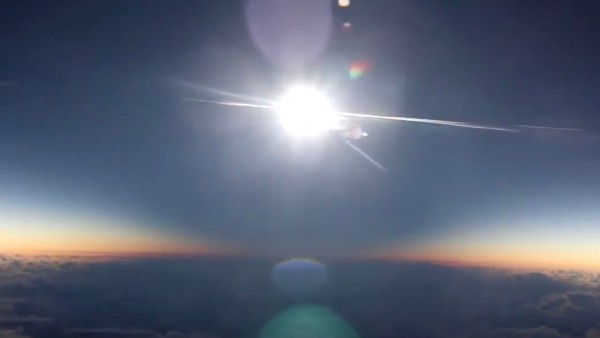 Around 10 seconds into the video, you can clearly see the moon’s shadow sweeping toward the video camera … The brightest thing here is the sun (about to be eclipsed). The other bright things are lens flares, internal reflections from the camera.

Bottom line: For the March 8, 2016 total solar eclipse, Alaska Airlines redirected a flight … and the result is this spectacular video.