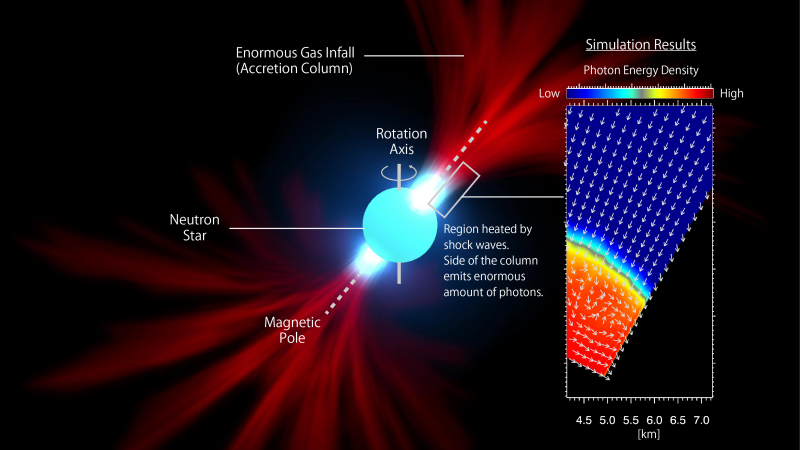 Pulsars are objects in space that blink at very precise intervals. The widely accepted model to explain them is the lighthouse model, involving a rotating, very dense neutron star that emits a highly focused beam of radiation. We can only see the beam when it points toward Earth, much as we see the flash of a lighthouse beam when it’s pointed our way. There are many kinds of pulsars, with many peculiar physical manifestations, and, on September 8, 2016, a research group led by Tomohisa Kawashima at the National Astronomical Observatory of Japan announced their use of a supercomputer to add one more possibility to the list. These scientists said that the central energy source of enigmatic pulsating Ultra Luminous X-ray sources – called ULXs – could be neutron stars, not black holes as previously thought.

Their paper is published in Publications of the Astronomical Society of Japan.

Astronomers first noticed ULXs in the 1980s. In the intervening years, astronomers have found about one ULX per galaxy in some galaxies, but other galaxies contain many and some (like our Milky Way, so far) none at all. If you assume ULXs radiate equally in all directions, they are more consistently luminous than any known stellar process, but no one actually does assume that. Instead, the popular model to explain them has been the black hole model. It’s the classic model involving an object with strong gravity (the black hole) pulling gas from a companion star. As the gas falls towards the black hole, it collides with other gas, heating up and creating a luminous gas that astronomers actually observe when they see a ULX.

Then, in 2014, the X-ray space telescope NuSTAR threw a wrench into the wide acceptance of the black hole model when it detected unexpected periodic pulsed emissions in a ULX named M82 X-2. The discovery of this ULX-pulsar has had astrophysicists scratching their heads because black holes shouldn’t be able to produce pulsed emissions.

Kawashima’s team doesn’t use black holes in its model at all. Instead, the team’s computer simulations show that a neutron star can provide the necessary pulsed luminosity under certain conditions. The explanation involves some thorny physics, which you can read in their statement, but they also provided the two videos below to help explain.

The first video shows an artist’s impression of the standard model of a pulsar. Photon beams are emitted from the magnetic poles of a neutron star. These photon beams twirl because of the misalignment between the magnetic poles and the rotation axis. As a result, the beams face towards an observer at regular intervals and pulsed emissions are observed coming from the neutron star.

The second video shows the model suggested by Kawashima and colleagues’ simulations, which they called a new cosmic lighthouse model for ULXs. They said:

For more of the physics of this model, be sure to read the scientists’ statement at the Center for Computational Astrophysics (CfCA).

This team said it is now planning to develop its work further by using this new lighthouse model to study the detailed observational features of the ULX-pulsar M82 X-2, and to explore other ULX-pulsar candidates.