Galaxy NGC 922 got its unusual shape millions of years ago when a smaller galaxy plunged right through its heart and shot out the other side.

This image, taken by the Hubble Space Telescope, shows a galaxy called NGC 922. The galaxy got its unusual shape as a result of a cosmic bullseye millions of years ago when a smaller galaxy plunged right through the heart of NGC 922 and shot out the other side. 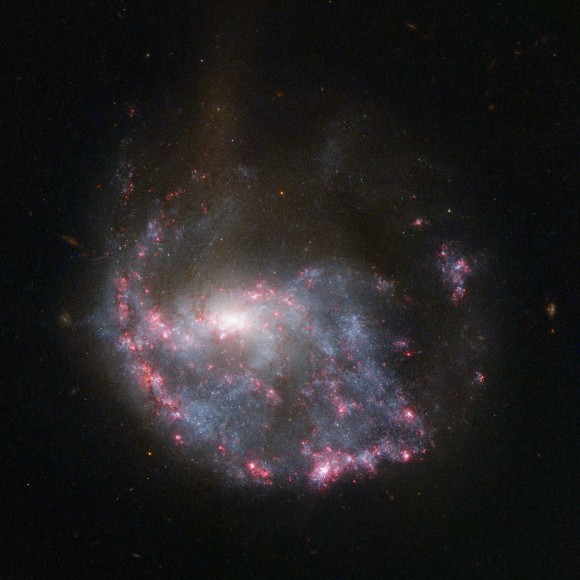 An almost complete circle of bright pink nebulae skirts around a spiral galaxy in this NASA/ESA Hubble Space Telescope image of NGC 922. The ring structure and the galaxy’s distorted spiral shape result from a smaller galaxy scoring a cosmic bullseye, hitting the center of NGC 922 some 330 million years ago. Image credit: NASA, ESO

In Hubble’s image, NGC 922 clearly reveals itself not to be a normal spiral galaxy. The spiral arms are disrupted, a stream of stars extends out towards the top of the image, and a bright ring of nebulae encircles the core. Observing with NASA’s Chandra X-ray Observatory reveals more chaos in the form of ultraluminous X-ray sources dotted around the galaxy.

NGC 922’s current unusual form is a result of a cosmic bullseye millions of years ago. A smaller galaxy, catalogued as 2MASXI J0224301-244443, plunged right through the heart of NGC 922 and shot out the other side. In wide-field views of the NGC 922, the small interloper can be still be seen shooting away from the scene of the crash.

As the small galaxy passed through the middle of NGC 922, it set up ripples that disrupted the clouds of gas, and triggered the formation of new stars whose radiation then lit up the remaining gas. The bright pink colour of the resulting nebulae is a characteristic sign of this process, and it is caused by excited hydrogen gas (the dominant element in interstellar gas clouds). This process of excitation and emission of light by gases is similar to that in neon signs.

In theory, if two galaxies are aligned just right, with the small one passing through the center of the larger one, the ring of nebulae should form a perfect circle, but more often the two galaxies are slightly off kilter, leading to a circle that, like this one, is noticeably brighter on one side than the other.

These objects, called collisional ring galaxies, are relatively rare in our cosmic neighbourhood. Although galaxy collisions and mergers are commonplace, the precise alignment and ratio of sizes necessary to form a ring like this is not, and the ring-like phenomenon is also thought to be relatively short-lived.

Bottom line: A Hubble Space Telescope image reveals the unusual shape of galaxy NGC 922. The galaxy that got its unusual shape as a result of a cosmic bullseye millions of years ago when a smaller galaxy plunged right through the heart of NGC 922 and shot out the other side.