If I had a boat, I’d sail Titan’s seas

On September 27, 2012, Spanish engineers presenting to the European Planetary Science Congress in Madrid proposed to send a boat to Titan.

We’ve walked on the moon, and our robot explorers have driven themselves across the red deserts of Mars. But the moon and Mars are relatively nearby in space. We space enthusiasts can’t help but gaze toward the outer solar system, toward ringed Saturn’s intriguing large moon Titan, which in 2007 was found to have bodies of liquid – lakes and seas – on its surface. In August 2012, NASA passed over an idea to land a craft in the seas of Titan. Last week (September 27, 2012), Spanish engineers announced their concept for a boat to sail Titan’s seas. 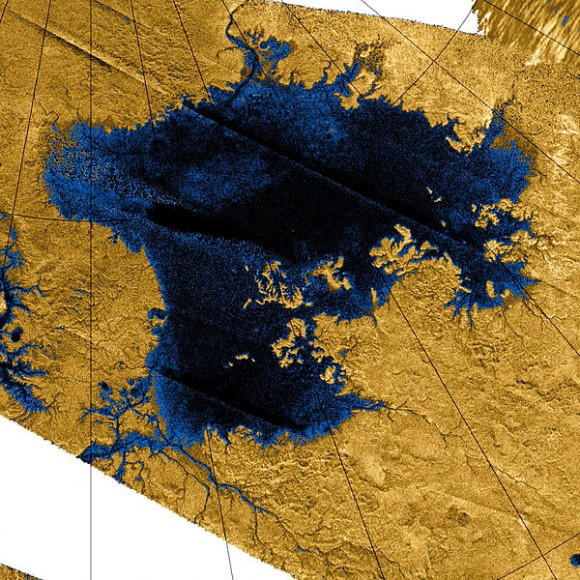 This region on Titan is called Ligeia Mare. It’s located in Titan’s northern hemisphere. It’s the second-largest known body of liquid on Titan. Spanish engineers want to land a boat in the middle of it and set sail for the nearest shoreline. See the river system extending off the lake, on the bottom part of the photo? I wonder what’s there. Image via Cassini spacecraft.

The Europeans are proposing a mission they call the Titan Lake In-situ Sampling Propelled Explorer, or TALISE. The mission would include a boat-probe, The probe would land in the middle of Ligeia Mare (see image above), which is a lake in the north polar region of Titan and the second-largest known body of liquid on Titan.

The boat would be propelled by wheels, paddles or screws, as shown in the image below. After a successful landing in Ligeia Mare, it would set sail for a nearby coastline, taking scientific measurements along the way. The mission would last around six months to a year.

Various engineering concepts for a means of propulsion for a Titan boat. Image via Grupo SENER.

The Spanish company Grupo Sener – a private engineering and technology group founded in 1956 – and the Centro de Astrobiología in Madrid, Spain formed a partnership to study the TALISE concept. They presented their proposal last week at the European Planetary Science Congress in Madrid.

They say the mission concept is the result of a Phase 0 study, meaning it’s not very far past the concept phase at this time. Future phases include a feasibility study and the development of preliminary mission architecture. You have to start somewhere, and if NASA isn’t going to Titan, someone should. 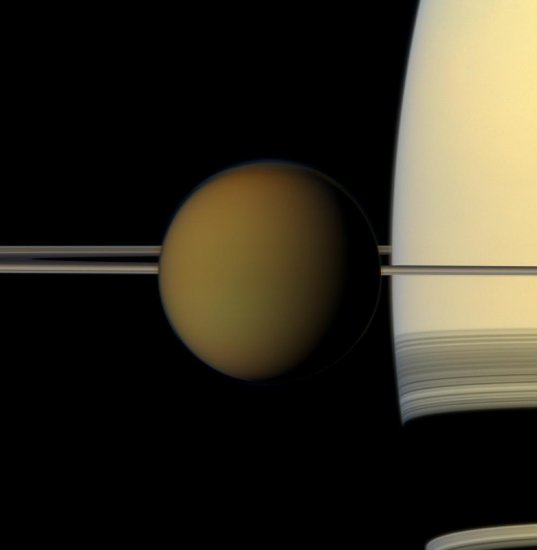 A true-color image of Titan, Saturn’s large moon, with ringed Saturn in the background. Image via Cassini spacecraft.

Titan is big – bigger than Earth’s moon. It’s a moon with a thick atmosphere. It has a network of seas, lakes and rivers, scientists say. These bodies don’t contain liquid water, as on Earth. Instead, they contain liquid ethane and methane, with Titan’s methane cycle acting as a distant cousin to Earth’s water cycle. The amazing Cassini–Huygens space probe confirmed this, but scientists had been speculating about liquid on Titan for decades.

The large bodies of liquid on Titan are known as maria (seas) and the small ones as lacus (lakes). That’s a bit confusing, since a lunar mare is an ancient lava bed, having no liquid at all. But that’s okay.

In this size comparison, Earth is on the right. Our moon is in the upper left. Titan is in the lower left. Image via Wikimedia Commons.

Titan’s lakes had been thought to be located mainly around its poles, but in 2012, Cassini spied long-standing methane lakes, or puddles, in the tropics of Titan.

NASA had its own proposed lake-lander mission to Titan called TiME, which stands for Titan Mare Explorer. It was one of three NASA Discovery Mission finalists, each of which received funds in May 2011 to develop a detailed concept study. The other two missions were InSight (a geophysics mission to Mars) and Comet Hopper. After a review in August 2012, NASA selected the InSight mission.