Evidence that Earth was hit by two solar storms – 10 times larger than those observed recently – 1,000 years ago. If they occurred today, they’d have devastating effects on power supplies, satellites and communications. 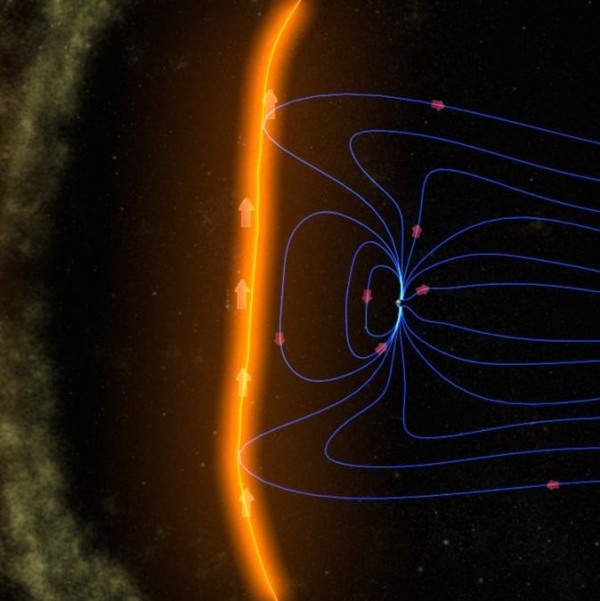 An illustration of Earth’s magnetic field shielding our planet from solar particles. Image via NASA/GSFC/SVS.

This week – October 26, 2014 – scientists in Sweden published a study in the journal Nature Communications suggesting that solar storms – streams of charged particles from the sun – could be much more powerful than previously assumed. Researchers at Lund University say they’ve now confirmed that Earth was hit by two extreme solar storms more than 1,000 years ago. These storms were at least 10 times larger than those observed in recent decades. The evidence for these storms is trapped in ice in Greenland and Antarctica.

Many skywatchers at high latitudes look forward to solar storms, because the particles they release may interact with Earth’s magnetic field, resulting in spectacular displays of auroras, or northern and southern lights. However, while solar storms aren’t harmful to us on Earth’s surface – because our atmosphere protects us – they do pose a risk to our earthly technologies.

In extreme cases, solar storms have caused major power outages, such as the one in October 2003 in Sweden and in March 1989 in Canada. They could also lead to breakdowns of satellites and communication systems. Raimund Muscheler of Lund University, speaking of the two enormous solar storms discovered by his research group, said in an October 26 statement:

If such enormous solar storms would hit Earth today, they could have devastating effects on our power supply, satellites and communication systems.

What did this new study say?

What are solar storms, and how do they affect us?

What would happen if such a powerful solar storm took place today?

Is such a powerful solar storm likely to occur again in our lifetimes? 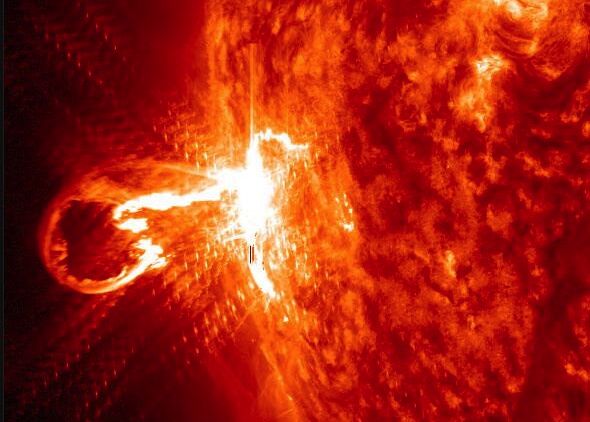 An X-flare via NASA SDO. Such flares often result in ‘coronal mass ejections’ or CMEs that hurl solar particles toward Earth.

What did this new study say? Researchers at Lund, together with colleagues in Switzerland, Denmark and the U.S., have been looking for traces of solar storms in the form of low levels of radioactive carbon, in ice cores from Greenland and Antarctica. Their statement explained:

Everywhere on Earth you can find traces of cosmic rays from the galaxy and the sun, such as low levels of radioactive carbon.

A few years ago researchers found traces of a rapid increase of radioactive carbon in tree rings from the periods AD 774/775 and AD 993/994. The cause for these increases was, however, debated.

… In this study, we have aimed to work systematically to find the cause for these events. We have now found corresponding increases for exactly the same periods in ice cores. With these new results it is possible to rule out all other suggested explanations, and thereby confirm extreme solar storms as the cause of these mysterious radiocarbon increases.

… the first reliable assessment of the particle fluxes connected to these events.

These solar storms by far exceeded any known events observed by instrumental measurements on Earth. The findings should lead to a reassessment of the risks associated with solar storms.

What are solar storms, and how do they affect us? Gigantic eruptions on the sun cause coronal mass ejections, or CMEs, the emission of huge quantities of charged particles into space. The particles have to be aimed toward Earth to strike us, but, if Earth happens to be in the path of a CME, the charged particles can slam into our atmosphere, causing a geomagnetic storm.

Such storms disrupt satellites in orbit and even cause them to fail, and bathe high-flying airplanes with radiation. They can disrupt telecommunications and navigation systems. They have the potential to affect power grids, and have been known to black out entire cities, even entire regions.

People talking about power failures from solar storms always point back to March 13, 1989 – 23 years ago. A CME caused a power failure in Québec, as well as across parts of the northeastern U.S. In this event, the electrical supply was cut off to over 6 million people for 9 hours.

The largest known solar storm took place on August 28, 1859. It was observed and recorded by Richard C. Carrington, and so it’s sometimes called the Carrington Event, or sometimes the 1859 Solar Superstorm. The accompanying coronal mass ejection (CME) traveled to Earth in only 17 hours, rather than the usual three or four days. The largest recorded geomagnetic storm occurred. Aurorae, or northern lights, were seen in many parts of the world. Telegraph systems throughout Europe and North America failed. 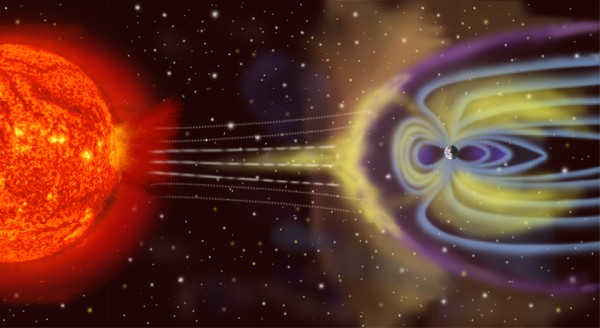 View larger. | Artist’s depiction of solar wind colliding with Earth’s magnetosphere (size and distance are not to scale). Image via NASA.

What would happen if such a powerful solar storm took place today?
We don’t know exactly, but scientists are asking more questions are solar storms and their consequences. For example, in 2012, scientists publishing in the journal Space Weather suggested that a 2001 power failure in New Zealand was caused by a solar storm. That result, if true, is particularly important because New Zealand is not at a high latitude (as Québec is, for example). It’s at a middle latitude, the same latitude as much of the United States. This 2012 study suggested that solar storm effects can reach into the more populous middle latitudes.

Scientists – for example at the Space Weather Prediction Center – continually monitor the sun, both from space and from Earth’s surface. When a solar storm with the potential to affect Earth takes place, they see it. After all, in order to affect us on Earth, the solar storm would have to happen on the side of the sun facing Earth.

After such an event, it usually takes several days for the coronal mass ejection, or CME, to reach Earth. When a big CME is on its way, it is possible for satellites to shut their systems off briefly, and thereby remain safe. Likewise, with advance warning, Earth-based power grids can be reconfigured to provide extra grounding. And so on.

Is such a powerful solar storm likely to occur again in our lifetimes? No one can answer that question. But scientists have become increasingly aware of the possibility, especially since 2008, when Sten Odenwald and James Green published an article in the magazine Scientific American about the Carrington Event and possible consequences if such a powerful storm on the sun occurred today.

Are we in danger from a particularly huge solar power, perhaps on a scale of the Carrington Event … or larger? Some believe we may be. That is why governments and scientists are beginning to pay more attention to this issue, with an eye to creating systems and procedures to help withstand such powerful effects from the sun.

The recent study from Sweden should add to the ongoing discussions among governments and scientists on the subject of powerful solar storms affecting Earth. 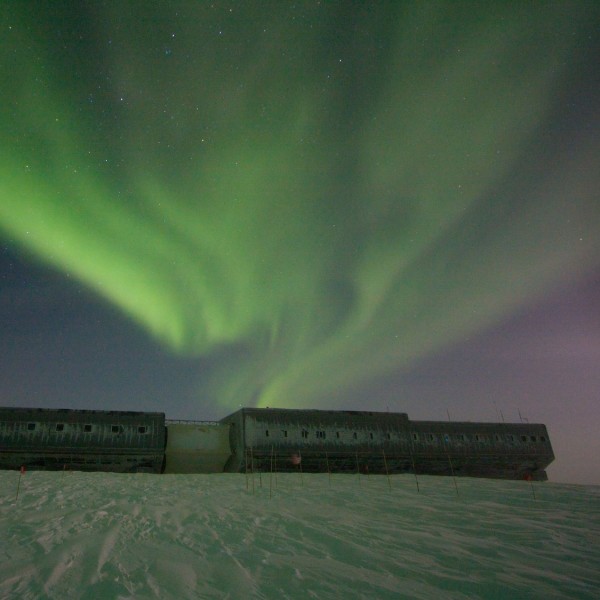 July 10, 2008 aurora over the South Pole in Antarctica. Auroras are caused by solar storms. New evidence for two enormous solar storms has been found trapped in ice in Greenland and Antarctica. Photo via Keith Vanderlinde/NSF

Bottom line: Researchers at University of Lund in Sweden have confirmed that Earth was hit by two extreme solar storms 1,000 years ago. These storms were at least 10 times larger than those observed in recent decades. Such enormous solar storms could have devastating effects on our power supply, satellites and communication systems. The evidence for these storms is trapped in ice in Greenland and Antarctica.