As the sun moves through space …

The IBEX spacecraft has now mapped the structure of our solar system’s comet-like tail. Photos in this post can help you picture how our sun carries you through space.

Researchers have long theorized that, like a comet, a “tail” trails the heliosphere, the giant bubble in which our solar system resides, as the heliosphere moves through interstellar space. The first IBEX images released in 2009 showed an unexpected ribbon of surprisingly high energetic neutral atom (ENA) emissions circling the upwind side of the solar system. With the collection of additional ENAs over the first year of observations, a structure dominated by lower energy ENAs emerged, which was preliminarily identified as the heliotail. However, it was quite small and appeared to be offset from the downwind direction, possibly because of interactions from the galaxy’s external magnetic field. 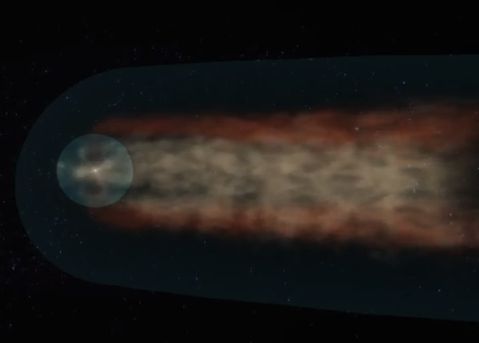 The solar system’s tail. Illustration via NASA. The round ball in this illustration is not the sun, but our whole solar system, out to the orbits of the farthest planets. The edges of the ball mark the heliopause, where the sun’s influence ends and interstellar space – the space between the stars – begins. The IBEX spacecraft has now explored the structure of the long “tail” streaming behind the sun. 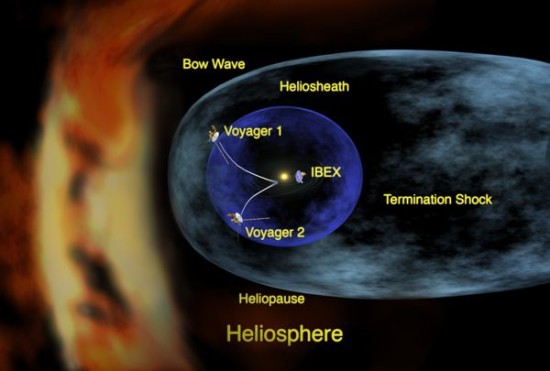 The round blue ball in this illustration again depicts the heliosphere surrounding our sun. The orange “cloud” at left is a shock wave created as our sun moves through interstellar space. Note the location of the Voyager spacecraft, now the farthest earthly craft from Earth in space. Voyager 1 is poised to leave the heliosphere. Also note the IBEX spacecraft. Illustration via NASA. 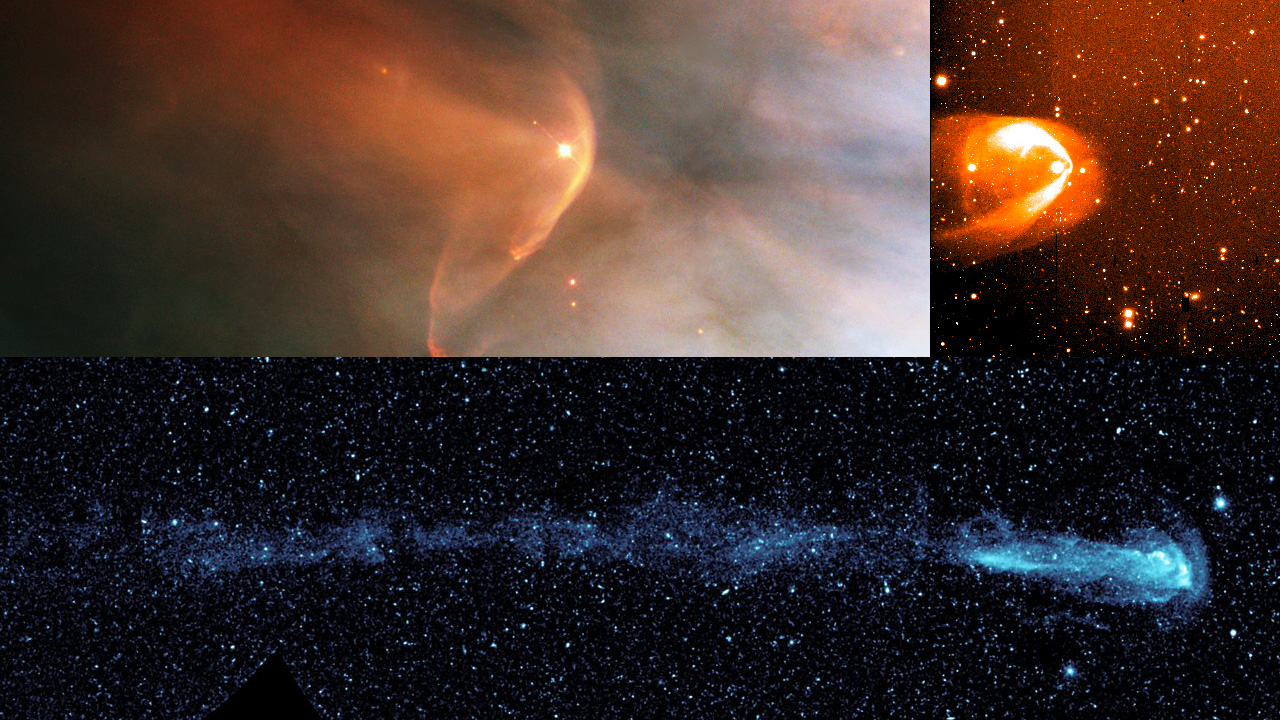 View larger. | Isn’t it logical that – if our sun has a surrounding heliosphere and a comet-like tail – other stars do, too? Yes. It is. The heliosphere is created by a balance between the outward-pushing “wind” from a star and the inward compression of the surrounding interstellar gas. This condition is so common that perhaps most stars have structures like our sun’s heliosphere, but, for stars, they are called “astrospheres.” Here are actual photographs of three such astrospheres, as taken by various telescopes. Images via NASA/ESA/JPL-Caltech/GSFC/SwRI

As the next two years of IBEX data filled in the observational hole in the downwind direction, researchers found a second tail region to the side of the previously identified one. The IBEX team reoriented the IBEX maps and two similar, low-energy ENA structures became clearly visible straddling the downwind direction of the heliosphere, indicating structures that better resemble “lobes” than a single unified tail.

“We chose the term ‘lobes’ very carefully,” says Dr. Dave McComas, IBEX principal investigator and assistant vice president of the Space Science and Engineering Division at Southwest Research Institute. “It may well be that these are separate structures bent back toward the downwind direction. However, we can’t say that for certain with the data we have today.”

The team adopted the nautical terms port and starboard to distinguish the lobes, as the heliosphere is the “vessel” that transports our solar system throughout the galaxy. 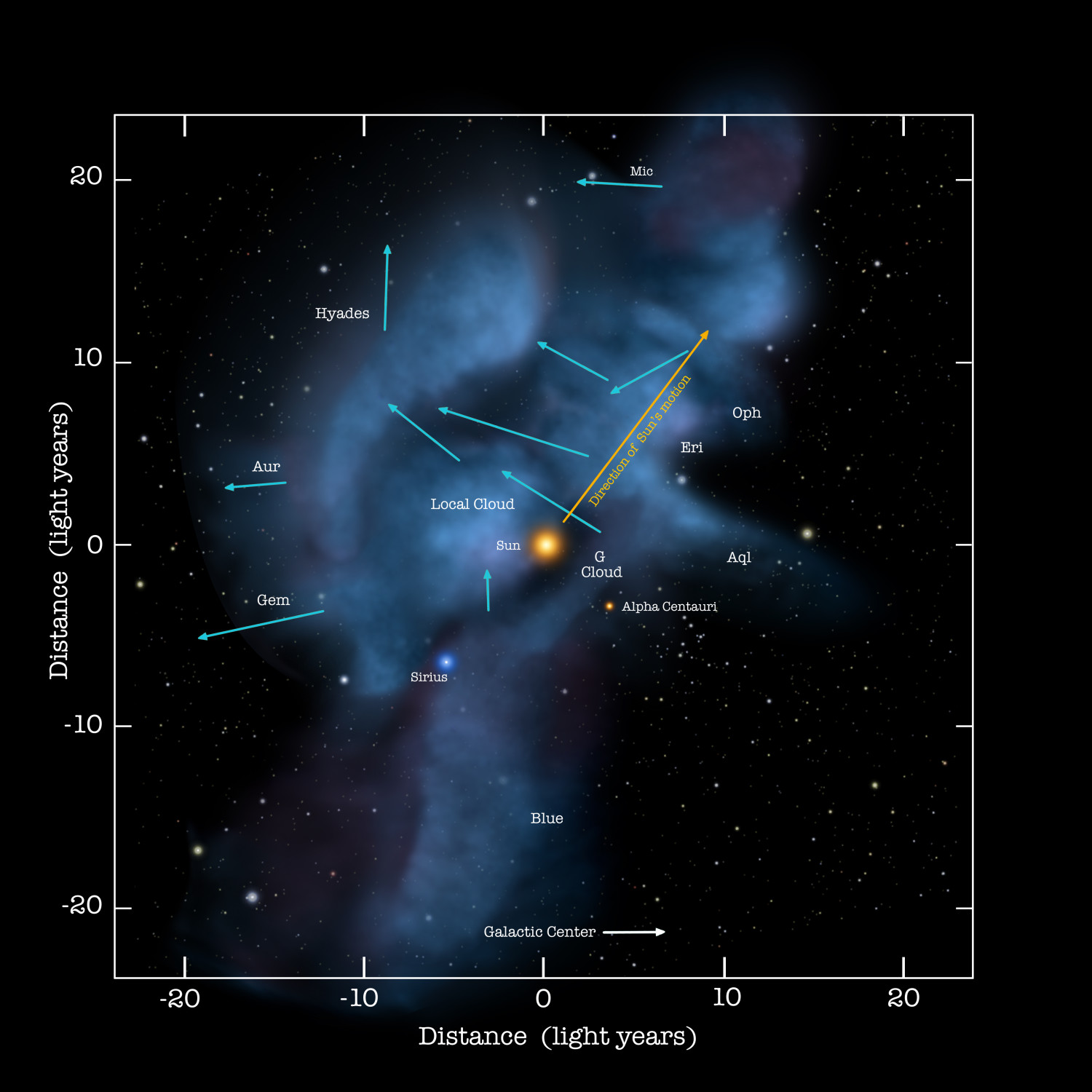 The journey of our sun through interstellar space is currently carrying us through a cluster of very low density interstellar clouds. Right now, the sun is inside of a cloud that is so tenuous that the interstellar gas detected by IBEX is as sparse as a handful of air stretched over a column that is hundreds of light-years long. These clouds are identified by their motions. Image via NASA/Adler/U. Chicago/Wesleyan

“We’re seeing a heliotail that’s much flatter and broader than expected, with a slight tilt,” says McComas. “Imagine sitting on a beach ball. The ball gets flattened by the external forces and its cross section is oval instead of circular. That’s the effect the external magnetic field appears to be having on the heliotail.”

“We often think we know what we’re going to study in science, but the work sometimes takes us in unexpected directions,” says McComas. “That was certainly the case with this study, which started by simply trying to better quantify the small structure incorrectly identified as an ‘offset heliotail.’ The heliotail we found was much bigger and very different from what we expected.”