What is the Hypatia Catalog? 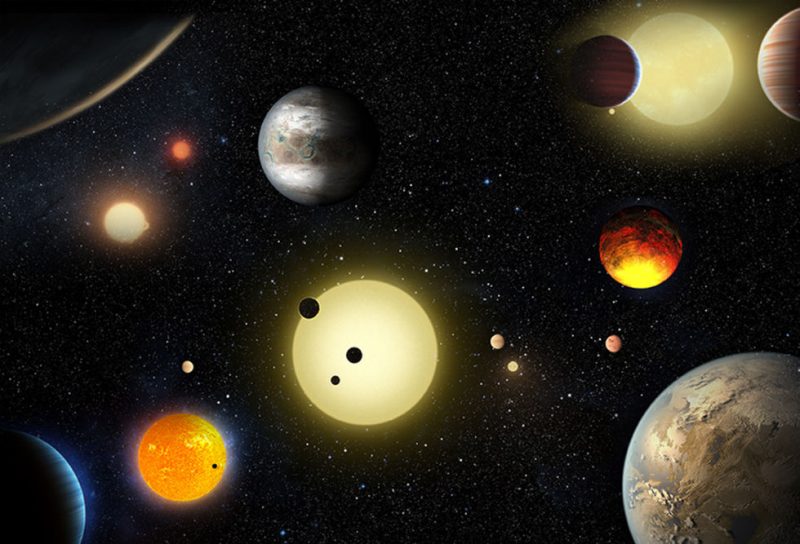 Artist’s concept of some of the different types of exoplanets discovered so far. Image via NASA.

As more and more exoplanets are discovered, with 3,778 confirmed so far plus 2,737 additional candidates, the focus is shifting from merely finding exoplanets to understanding them. To that end, planetary astrophysicist Natalie Hinkel of the Southwest Research Institute (SwRI) in San Antonio, Texas, has developed a new, large database, which she named the Hypatia Catalog. It uses big data – extremely large data sets – organized in a way she hopes will lead to a deeper understanding of habitable planets. A statement from SwRI on August 28, 2018, said:

Of particular interest are exoplanets that could harbor life.

Hinkel pointed out in the statement that scientists’ concept of planetary habitability is changing as time passes, and more is learned about these distant worlds. She explained:

At first scientists focused on temperatures, looking for exoplanets in the Goldilocks zone — neither too close, nor too far from the star, where liquid water could exist.

But the definition of habitability is evolving beyond liquid water and a cozy temperature. 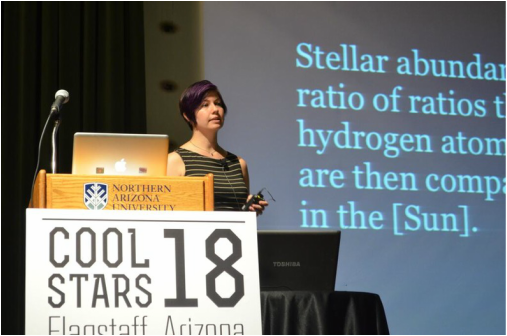 Natalie Hinkel studies the chemical elements in stars near our sun and, as she describes it, “the chemical interplay between stars and their planets.” Image via NatalieHinkel.com

She said that, along with suitable temperatures and liquid water, there are other requirements for habitability as well, such as the chemical building blocks – hydrogen, carbon, nitrogen, oxygen and phosphorus – needed for life. Earth-like habitable planet also need a rocky composition with elements such as iron, silicon and magnesium. Active geochemistry and a dense-enough protective atmosphere are seen as necessary for life to flourish. As Hinkel noted:

With current technology, we can’t measure the composition of an exoplanet’s surface, much less its interior. But we can measure the abundance of elements in a star spectroscopically, studying how light interacts with the elements in a star’s upper layers. Using these data, scientists can infer what a star’s orbiting planets are made of, using stellar composition as a proxy for its planets.

And so the Hypatia Catalog Database was born.

The catalog is a publicly available database that helps researchers “explore” thousands of stars, and possible planetary systems, observed during the past 35 years.

It is the largest database of stars and their chemical elements which are within 500 light-years.

The database also contains 72 stellar elements from hydrogen to lead, and chemical abundance data on 6,156 stars – 365 of which are known to have planets. 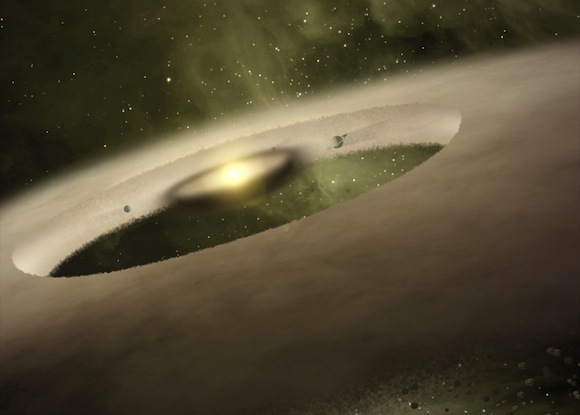 Artist’s concept of a sun-like star and its planets, forming from a single cloud of gas and dust. Hinkel’s Hypatia Catalog will enable other astronomers to explore the chemical abundances of stars, and, in this way, it’ll let them what a star’s orbiting planets might be made of. Illustration by NASA/JPL-Caltech/T. Pyle, SSC

The Hypatia Catalog and other large databases of stellar chemical abundances open up a new age of exoplanet exploration. We found that a few of the planets, including one in the habitable zone, are likely “water worlds,” composed of 5 to 25 percent water, which would strongly affect their habitability.

By comparison, Earth has 0.02 percent water.

Hinkel was part of the research team that recently modeled the amount of water contained in the seven known Earth-sized planets orbiting the nearby star TRAPPIST-1. She is now working with a variety of machine learning algorithms to explore how the presence of a planet could influence the chemistry of the host star. 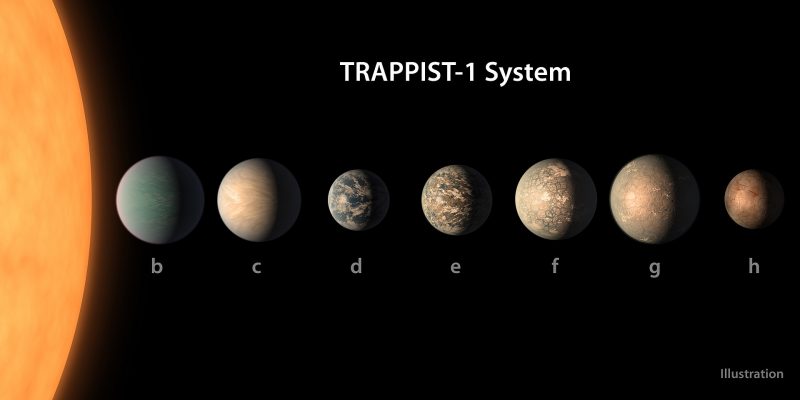 Hinkel has also modeled water abundance in the TRAPPIST-1 planetary system, which has 7 known Earth-sized planets, 3 of which are in the star’s habitable zone. Image via NASA/JPL-Caltech.

The Hypatia Catalog Database was named after one of Hinkel’s favorite scientific heroines – Hypatia (born c. 350–370; died 415 AD) – a philosopher, astronomer, and mathematician living in Alexandria, Egypt. A detailed overview of Hypatia’s life is available here. 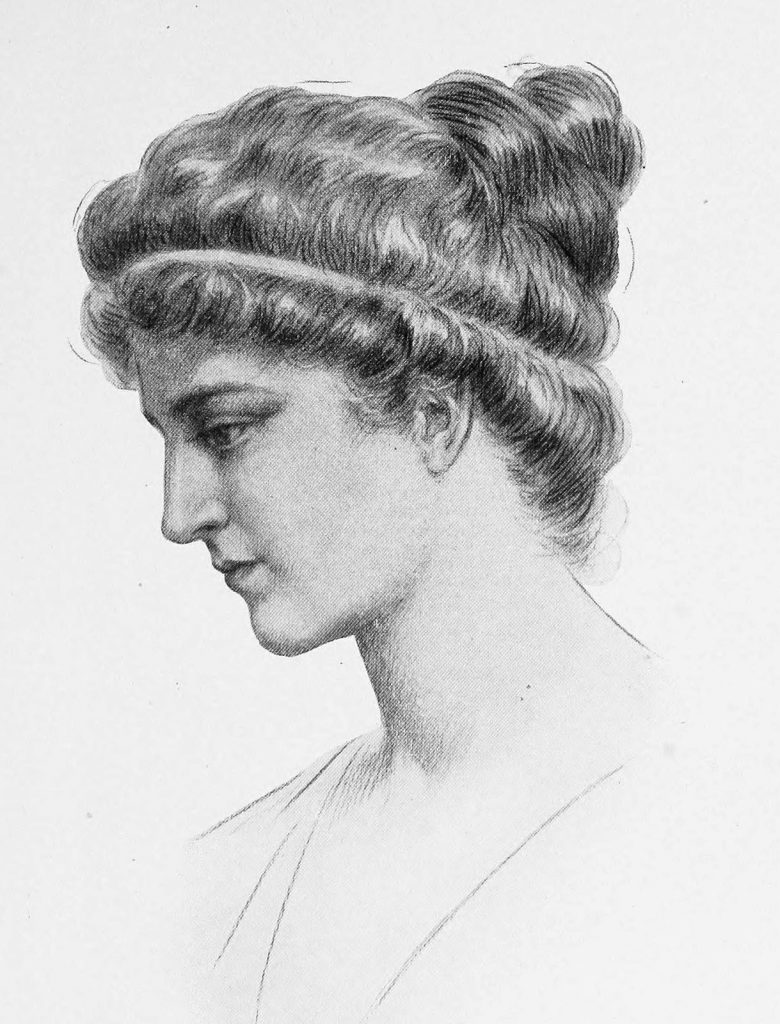 Hypatia of ancient Alexandria, Egypt. Image via From Little Journeys to the Homes of Great Teachers: Hypatia by Elbert Hubbard, 1908. The Hypatia Catalog is named for her.

Hinkel told EarthSky why she was motivated to name the database after Hypatia:

To understand why I named my database – the thing that I’ve worked the longest and hardest on in my life, the thing that I am the most proud of in my career – you have to know a bit about Hypatia. She was a strong woman who was intelligent, independent, and brave. She worked hard and she spoke her mind, regardless of the consequence. Hypatia filled a very powerful role, one made even more impressive as a woman in a largely male arena.

I named my database for her, because I respected her and I empathized with her. In many ways, her spirit is one that I try to follow.

Bottom line: The new Hypatia Catalog will let astronomers better understand distant exoplanets and help them determine which may be habitable.

Source: Stellar Abundances in the Solar Neighborhood: The Hypatia Catalog