Effects of a coronal mass ejection from huge sunspot region 1476 will deliver a glancing blow to Earth today, while in route to Mars.

UPDATE MAY 14, 2012 9:34 A.M. CDT (14:34 UTC) NOAA forecasters estimate a 15% to 25% chance of minor geomagnetic storms during the next 24 hours, according to spaceweather.com. NOAA’s Space Weather Prediction Center – on its Space Weather Today page – says that Earth’s geomagnetic field today should be “quiet to unsettled” with a chance for “active periods,” following the coronal mass ejection (CME) from monster sunspot 1476 last Friday. NOAA says:

In other words, no major effects are expected, but this might be a good time for those at northerly latitudes to watch for the beautiful aurorae or northern lights.

Over this past week, Active Region 1476 has been one of the largest sunspot regions visible on the solar surface since the 2003 “Halloween Storm.” But this monster sunspot moving out of view now. The video below shows the path and development of AR 1476 from May 5 through May 11, 2012. Watch it come into view on the upper left side of the sun’s visible surface, rotate to the center of the sun’s disk as seen from Earth, then begin to pass out of view.

This animation depicts a coronal mass ejection, or CME, which left the sun on May 11 and will give a glancing blow to Earth (yellow dot) on May 14. Mars (red dot) will take a more direct hit. Image Credit: Goddard Space Weather Lab

As you can see from the revised forecast track above, prepared by analysts at the Goddard Space Weather Lab, Earth (yellow dot) will receive a glancing blow from the CME. Mars (red dot) will be struck more directly.

This monster sunspot region has been witnessed by many from across Earth’s surface during this past week. It has released some M-class flares, such as the one shown below, but no CMEs until last night. 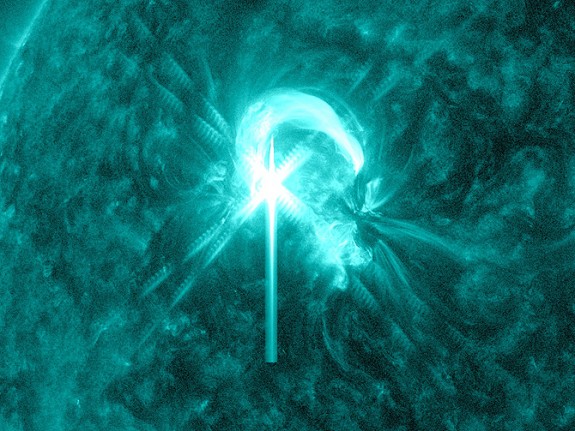 Check out the photographs below from photographers from around the globe.

MAY 11, 2012 10:17 CDT (15:17 UTC) Space weather forecasters at NOAA estimate a 75% chance of M-class solar flares and a 20% chance of X-flares during the next 24 hours from the large sunspot AR 1476. This sunspot is directly facing our planet, so if a flare does occur its effects on the space weather environment are likely to pass our way. NOAA’s Space Weather Prediction Center said today (May 11, 2012):

NOAA Region 1476, now right in the middle of the solar disk, continues to dissipate its energy in relatively small bursts of modest flares and weak CMEs. That output belies its appearance — large sunspots and entangled magnetic fields. Forecasters are vigilant. Watch here should things break loose.

What are the effects of a solar flare on Earth? These flares have been happening throughout human evolution. They’ve been happening for billions of years of Earth history. So there is no danger to our Earth or our human bodies. Our technology can take a hit, however, when a major flare occurs. Destructive effects might occur to satellites in orbit, power grids and GPS systems. Perhaps the most famous example of a solar flare causing a power failure occurred in 1989 in Quebec, when the power went out for nine hours due to a large solar flare.

This monster region of sunspots on the sun’s surface – AR 1476, as long as 10 planet Earths – has been turned in Earth’s direction this week. It has produced M-class solar flares already, including an M5-class solar flare on the morning of May 10, 2012. It might soon produce an X-flare, the most powerful kind of solar flare, scientists say.

Amateur astronomers are also watching this solar flare, and taking some wonderful photos of it, such as the beautiful photo below from Stefano De Rosa in the city of Turin in northern Italy.

The Space Weather Prediction Center has also been speaking of radio blackouts this week, caused by this flare and the EarthSky community on this website and our Facebook page has reported radio blackouts in various places in the world.

Jason Samenow of the Washington Post wrote earlier this week:

While the sunspot region is being called one of the largest in years – as long as 10 Earths and 60,000 miles wide, NOAA’s Space Weather Prediction Center notes it’s just one-third in area of the large regions of the Halloween Storms in 2003.

Another great photo came from Zlatan Merakov in Smolyan, Bulgaria.

Sunspot 1476 from EarthSky Facebook friend Zlatan Merakov in Smolyan, Bulgaria. The inset shows the size of the sunspot region compared to Earth.

Zlatan Merakov posted the image above on our Facebook page early this morning, saying:

AR 1476, one of the greatest sunspots I’ve ever observed, shot about one hour ago in visible light and compared in size to Earth, our planet.

VegaStar Carpentier in Paris posted this photo to our Facebook page this morning. 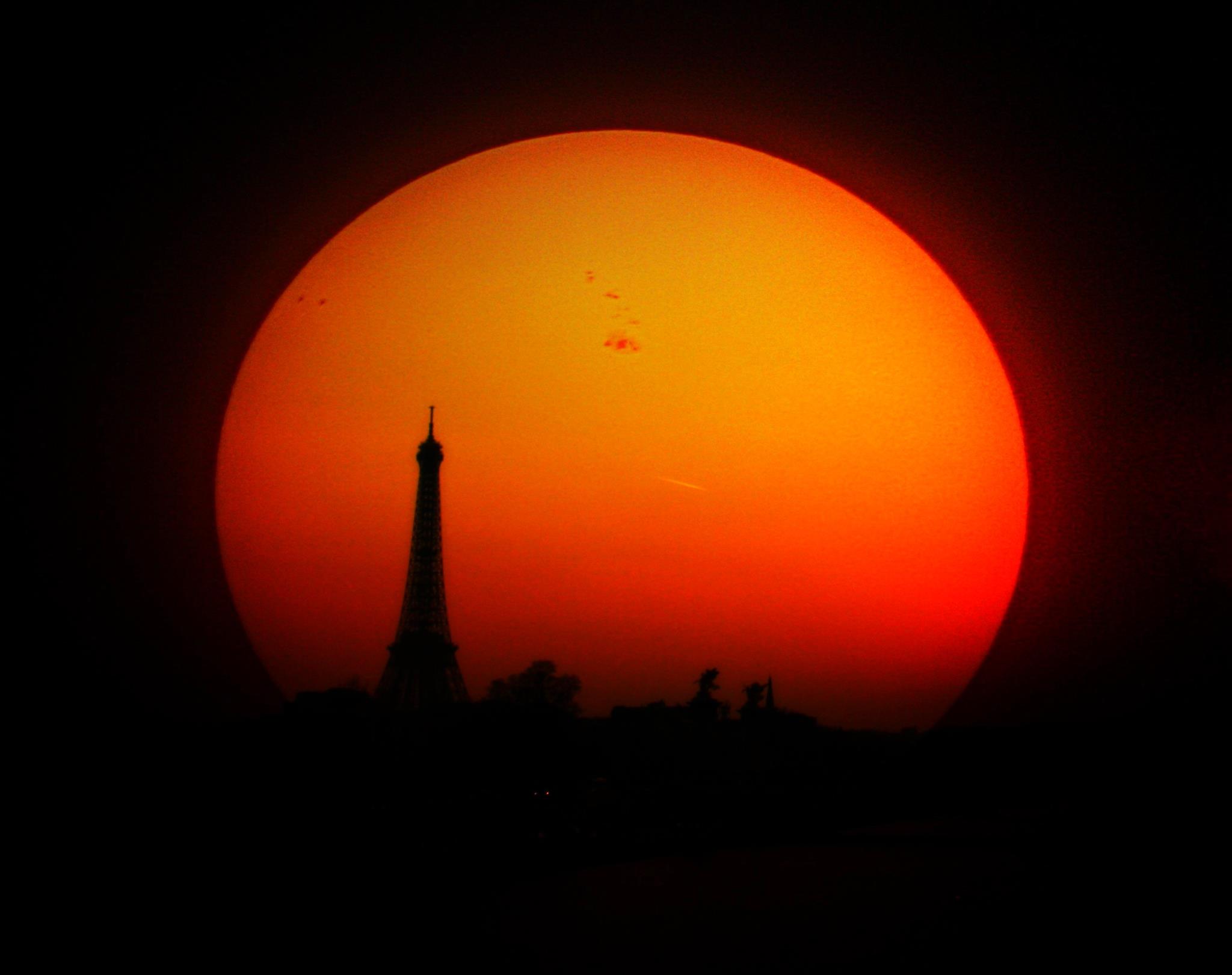 Stay tuned for more on this mighty sunspot region.

Bottom line: Sunspot region AR 1476 has produced an M5-class solar flare this morning (May 10, 2012), and might soon produce an X-flare, the most powerful kind of solar flare, scientists say. NOAA forecasters are estimating a 65% chance of more M-class flares and a 10% chance of X-flares during the next 24 hours.