It’s a super Saturn, 434 light-years from Earth. It has more than 30 rings, with a total diameter of some 120 million kilometers. If we could replace Saturn’s rings with these rings, they’d be easily visible from Earth and larger in our sky than a full moon. 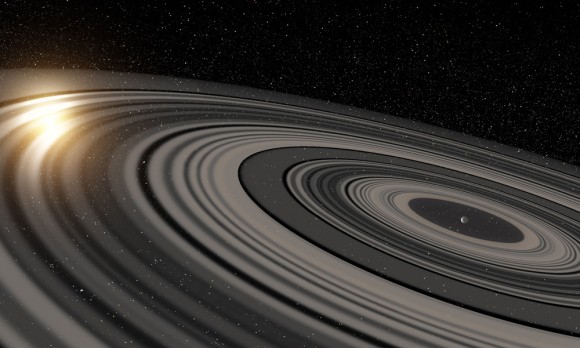 Artist’s concept of the ring system around the young giant planet or brown dwarf J1407b. Image via Ron Miller

An international team of astronomers have discovered that a ring system around a distant planet – called J1407b – is of enormous proportions, much larger and heavier than the ring system of Saturn.

The planet orbits star J1407, located approximately 434 light-years from Earth. Astronomers first identified the ring system – the first of its kind to be found outside our solar system – in 2012. A new analysis of the data, published in the Astrophysical Journal, shows that the ring system consists of more than 30 rings, each of them tens of millions of kilometers in diameter. Furthermore, the analysis found gaps in the rings, which indicate that satellites (“exomoons”) may have formed.

Erik Mamajek is a professor of physics and astronomy at the University of Rochester and a co-author of the ring study. He said:

This planet is much larger than Jupiter or Saturn, and its ring system is roughly 200 times larger than Saturn’s rings are today. You could think of it as kind of a super Saturn.

If the enormous ring system around J1407b’s replaced the rings of Saturn in our solar system, they’d be visible at night to the unaided eye, with many times the diameter of a full moon. Illustration via M. Kenworthy/Leiden.

The disk of rings is so vast that, were it around Saturn, it would dominate our night sky, the astronomers said. According to Matthew Kenworthy of the Leiden Observatory in The Netherlands:

If we could replace Saturn’s rings with the rings around J1407b, they would be easily visible at night and be many times larger than the full moon.

Mamajek put into context how much material is contained in these disks and rings:

If you were to grind up the four large Galilean moons of Jupiter into dust and ice and spread out the material over their orbits in a ring around Jupiter, the ring would be so opaque to light that a distant observer that saw the ring pass in front of the sun would see a very deep, multi-day eclipse.

In the case of J1407, we see the rings blocking as much as 95 percent of the light of this young Sun-like star for days, so there is a lot of material there that could then form satellites.

Astronomers expect that the rings will become thinner in the next several million years and eventually disappear as satellites form from the material in the disks.

Bottom line: First-ever ringed planet beyond our solar system. You could think of it as kind of a super Saturn. Called J1407b, its ring system is 200 times larger than Saturn’s.

Read more about the study from the University of Rochester