Astronomers used an instrument called MUSE to conduct the deepest-ever spectroscopic survey. The result was a bonanza of new knowledge. 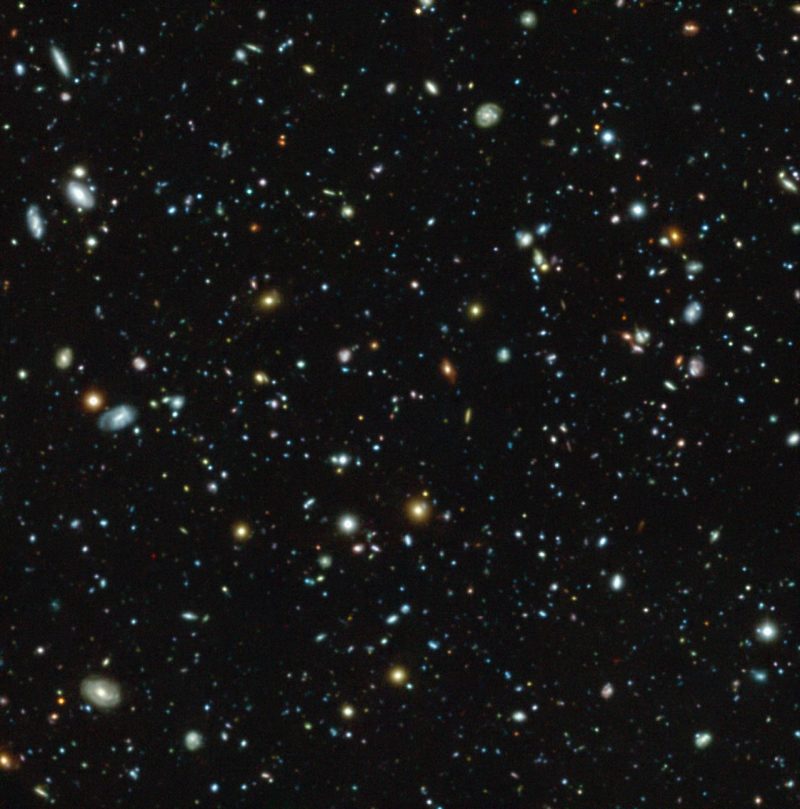 Here’s the Hubble Ultra Deep Field region, as observed with the MUSE instrument installed at the Very Large Telescope of the European Southern Observatory in northern Chile. MUSE data provide a rainbow-like spectrum for each pixel in this picture. Image via ESO/ MUSE HUDF collaboration.

Sometimes, astronomy is about surveying widely to get the big picture. And sometimes it’s about looking more and more deeply. First released in 2004, the Hubble Ultra Deep Field is clearly about going deep. It’s a composite image of a tiny region of space, located in the direction of the southern constellation Fornax, made from Hubble Space Telescope data gathered over several months. There are an estimated 10,000 galaxies in the Hubble Ultra Deep Field, which exist as far back in time as 13 billion years ago (between 400 and 800 million years after the Big Bang). Being able to see galaxies so near the beginning of our universe has been a fantastic tool for understanding how the universe has evolved. And now – thanks to an instrument called MUSE (Multi Unit Spectroscopic Explorer), astronomers have been able to eke out yet more information – a veritable bonanza of information – from the Hubble Ultra Deep Field. Their work is being published today (November 29, 2017) in a series of 10 papers in a special issue of the peer-reviewed journal Astronomy & Astrophysics.

MUSE does more than just see the galaxies. It also splits their light into its component colors, using a technique that astronomers call spectroscopy. In the image above, a team of astronomers led by Roland Bacon of the Centre de recherche astrophysique de Lyon, France, used MUSE to obtain a rainbow-like spectrum for each pixel in the Hubble Ultra Deep Field.

These astronomers said this work involved:

… the deepest spectroscopic observations ever made.

They obtained spectra for 1,600 galaxies in the Hubble Ultra Deep Field. That’s 10 times as many galaxies as has been painstakingly obtained in this field over the last decade by ground-based telescopes. Roland Bacon said:

MUSE can do something that Hubble can’t — it splits up the light from every point in the image into its component colours to create a spectrum. This allows us to measure the distance, colors and other properties of all the galaxies we can see — including some that are invisible to Hubble itself.

Jarle Brinchmann, lead author of one of the papers describing results from this survey, from the University of Leiden in the Netherlands and the Institute of Astrophysics and Space Sciences at CAUP in Porto, Portugal, commented:

MUSE has the unique ability to extract information about some of the earliest galaxies in the universe — even in a part of the sky that is already very well studied. We learn things about these galaxies that is only possible with spectroscopy, such as chemical content and internal motions — not galaxy by galaxy but all at once for all the galaxies!

Among other results, MUSE revealed 72 galaxies never seen before in this very tiny area of the sky. These galaxies wouldn’t have been obvious to Hubble. They’re members of a perplexing group of galaxies known as Lyman-alpha emitters. They shine only in Lyman-alpha light (produced when electrons in hydrogen atoms drop from the second-lowest to the lowest energy level). These objects become noticeable in MUSE data because MUSE disperses the light into its component colors. Meanwhile, in direct images such as those from the Hubble Space Telescope, these galaxies remain invisible. Why do these galaxies shine in this peculiar way? Astronomers don’t fully know.

The work also revealed luminous hydrogen halos around galaxies in the early universe. The astronomers said this discovery offers:

… a new and promising way to study how material flows in and out of early galaxies.

Other potential applications of this dataset are explored in the series of papers, including a study of the role of faint galaxies during cosmic reionization (starting just 380,000 years after the Big Bang), galaxy merger rates when the universe was young, galactic winds, star formation and the mapping the motions of stars in the early universe.

Roland Bacon pointed out that the data for all of this work were obtained prior to an upgrade to MUSE’s Adaptive Optics Facility (AOF). He said:

The activation of the AOF after a decade of intensive work by ESO’s astronomers and engineers promises yet more revolutionary data in the future.

From MUSE’s website: “Looking like a machine straight out of the movie The Matrix, with its Medusa-like hoses and connections, MUSE is the latest of the 2nd-generation instruments to be installed on Yepun (UT4), the fourth Unit Telescope of the Very Large Telescope at the Paranal Observatory.”

Bottom line: Astronomers used an instrument called MUSE to peer toward the area of the Hubble Ultra Deep Field and to conduct the deepest-ever spectroscopic survey. The result? A bonanza of new knowledge!

The 10 new papers via MUSE:

The MUSE Hubble Ultra Deep Field Survey: VI. The Faint-End of the Ly-alpha Luminosity Function at 2.91 < z < 6.64 and Implications for Reionisation