Interstellar forecast for a nearby star: Raining comets! The Hubble Space Telescope has discovered doomed, wayward comets plunging into the star HD 172555. 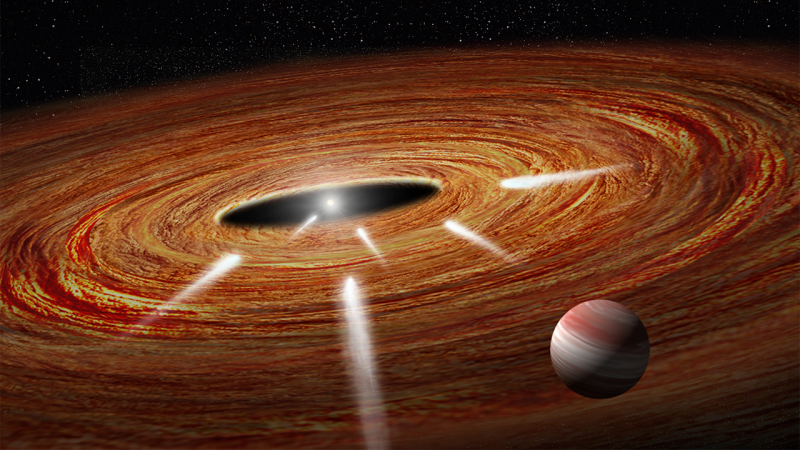 Artist’s concept of comets speeding across a vast protoplanetary disk of gas and dust, heading straight for the youthful star HD 172555. These kamikaze comets will eventually plunge into the star and vaporize. This star represents the 3rd extrasolar system where astronomers have detected doomed, wayward comets. Image via Hubblesite, NASA, ESA, and A. Feild and G. Bacon (STScI).

NASA said on January 6, 2017 that its Hubble Space Telescope has discovered what appears to be comets plunging into the star HD 172555. This star can be seen from Earth’s Southern Hemisphere, in the direction to our constellation Pavo. It’s known to be only 23 million years old, in contrast to our middle-aged 5-billion-year-old sun. It’s 95 light-years from Earth. Hubble didn’t see the exocomets directly. They’re vastly too faint to be seen, even by Hubble. Instead, astronomers inferred their presence by detecting gas that’s likely the vaporized remnants of their icy cores, or nuclei.

Assuming astronomers are interpreting the presence of this gas correctly, then HD 172555 is the third distant star system known to have doomed, wayward comets. All of these systems are young, under 40 million years old.

The astronomers also believe there must be unseen Jupiter-size planets in these star system. The doomed comets provide circumstantial evidence for gravitational stirring by such a planet; in other words, the planet’s gravity deflects the comets from their orbits, causing them to plunge into the star.

There’s a tie to our own solar system, too. Water may have comet to Earth by way of comets or asteroids. The scenario provided by these three extrasolar systems – in which a large planet deflects the orbits of comets, causing them to plunge sunward – could be part of the mechanism by Earth got its water.

We still see sungrazing comets in our own solar system. The video below, from NASA Goddard, explains more about them:

Seeing these sungrazing comets in our solar system and in three extrasolar systems means that this activity may be common in young star systems. This activity at its peak represents a star’s active teenage years. Watching these events gives us insight into what probably went on in the early days of our solar system, when comets were pelting the inner solar system bodies, including Earth. In fact, these star-grazing comets may make life possible, because they carry water and other life-forming elements, such as carbon, to terrestrial planets.

Her team plans follow-up observations to look for the elements oxygen and hydrogen, would confirm the identity of the disintegrating objects as comets. She said:

Hubble shows that these star-grazers look and move like comets, but until we determine their composition, we cannot confirm they are comets. We need additional data to establish whether our star-grazers are icy like comets or more rocky like asteroids.