NASA okays the use of the Hubble Space Telescope in the search for an object the New Horizons spacecraft can visit after its Pluto encounter in 2015. 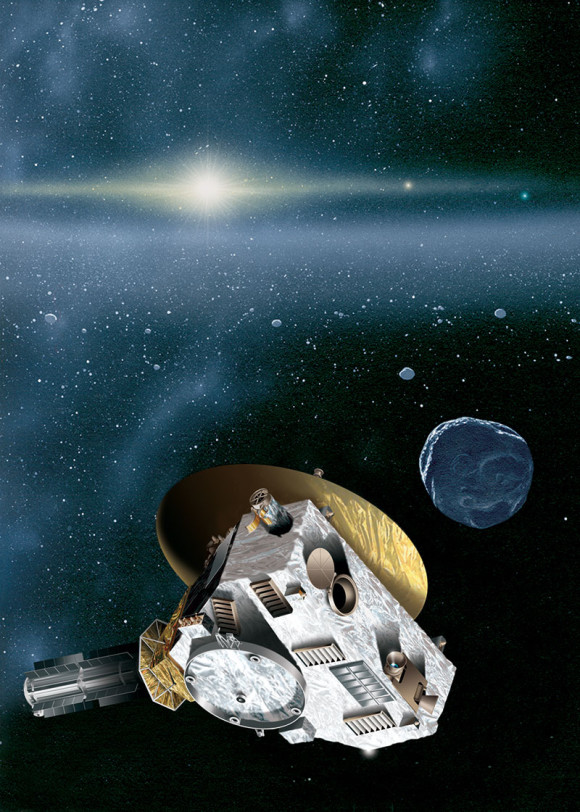 This is an artist’s rendering of the New Horizons spacecraft encountering a Kuiper Belt object — a city-sized icy relic left over from the birth of our solar system. The sun, more than 4.1 billion miles (6.7 billion kilometers) away, shines as a bright star embedded in the glow of the zodiacal dust cloud. Jupiter and Neptune are visible as orange and blue “stars” to the right of the sun. Image via JHUAPL/SwRI

The planned Hubble search will involve targeting a small area of sky in search of a Kuiper Belt object (KBO) for the outbound spacecraft to visit. The Kuiper Belt is a vast debris field of icy bodies left over from the solar system’s formation 4.6 billion years ago. A Kuiper Belt object has never been seen up close because the belt is so far from the sun, stretching out to a distance of 5 billion miles into a never-before-visited frontier of the solar system.

I am pleased that our science peer-review process arrived at a consensus as to how to effectively use Hubble’s unique capabilities to support the science goals of the New Horizons mission.

Fully carrying out the KBO search is contingent on the results from a pilot observation using Hubble data. The space telescope will scan an area of sky in the direction of the constellation Sagittarius to try and identify any objects orbiting within the Kuiper Belt. To discriminate between a foreground KBO and the clutter of background stars in Sagittarius, the telescope will turn at the predicted rate that KBOs are moving against the background stars. In the resulting images, the stars will be streaked, but any KBOs should appear as pinpoint objects.

If the test observation identifies at least two KBOs of a specified brightness it will demonstrate statistically that Hubble has a chance of finding an appropriate KBO for New Horizons to visit. At that point, an additional allotment of observing time will continue the search across a field of view roughly the angular size of the full moon.