The universe suddenly looks a lot more crowded, thanks to a deep-sky census assembled from surveys taken by the Hubble Space Telescope and other observatories. 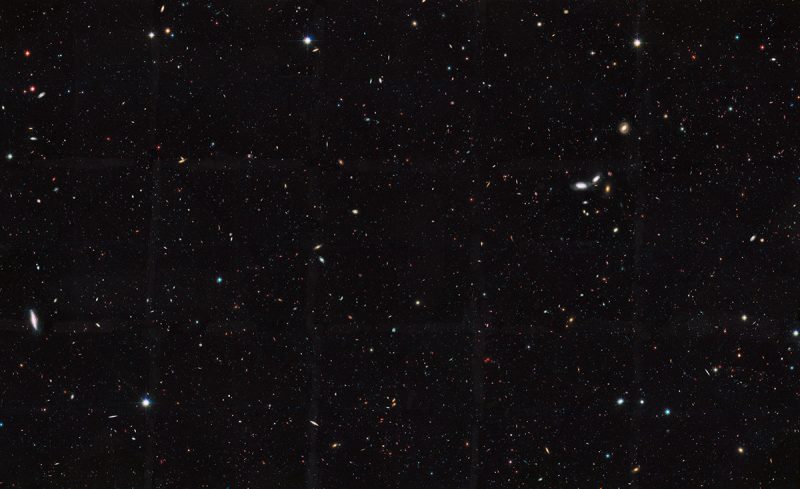 Astronomers announced on October 13, 2016 that an analysis of data from the Hubble Space Telescope and other observatories has revealed there are at least 10 times more galaxies in the observable universe than previously thought. The announcement at HubbleSite said:

The results have clear implications for galaxy formation, and also helps shed light on an ancient astronomical paradox — why is the sky dark at night?

Astronomer Christopher Conselice of the University of Nottingham, U.K. led the team that found that 10 times as many galaxies are packed into a given volume of space in the early universe than found today. HubbleSite explained:

Most of these galaxies were relatively small and faint, with masses similar to those of the satellite galaxies surrounding the Milky Way. As they merged to form larger galaxies the population density of galaxies in space dwindled.

This means that galaxies are not evenly distributed throughout the universe’s history.

And thus these results indicate that a significant galaxy evolution has taken place throughout our universe’s history. That is, as galaxies merged over time, the total number of galaxies was reduced. 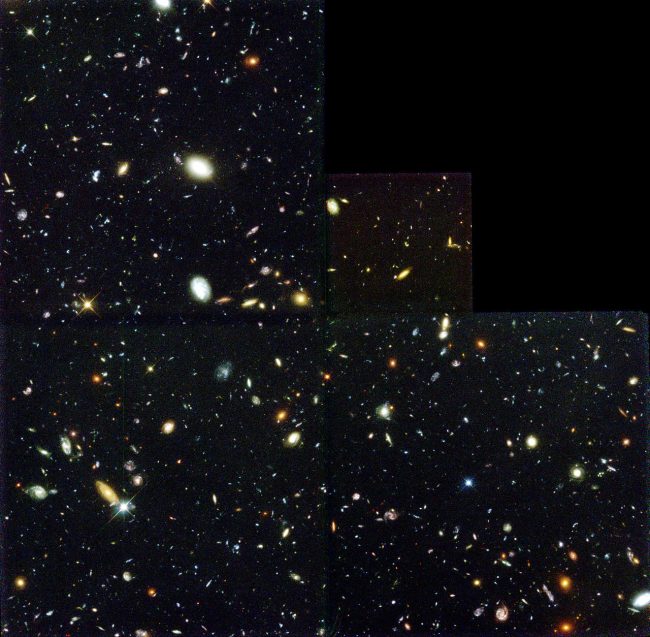 Image from the Hubble Deep Field, via HubbleSite..

How do we know the number of galaxies in the universe. One of the first attempts to quantify it came from the landmark Hubble Deep Field, a survey conducted in the mid-1990s. Subsequent sensitive observations such as Hubble’s Ultra Deep Field revealed a myriad of faint galaxies.

This early work led to an estimate that the observable universe contains about 200 billion galaxies. Now the new analysis of Hubble data shows that this estimate is at least 10 times too low.

Conselice and his team analyzed deep-space images from Hubble and the already published data from other teams. They painstakingly converted the images into 3-D, in order to make accurate measurements of the number of galaxies at different epochs in the universe’s history. In addition, they used new mathematical models, which allowed them to infer the existence of galaxies that the current generation of telescopes cannot observe.

This led to the surprising conclusion that in order for the numbers of galaxies we now see and their masses to add up, there must be a further 90 percent of galaxies in the observable universe that are too faint and too far away to be seen with present-day telescopes. These myriad small faint galaxies from the early universe merged over time into the larger galaxies we can now observe. Conselice said:

It boggles the mind that over 90 percent of the galaxies in the universe have yet to be studied. Who knows what interesting properties we will find when we discover these galaxies with future generations of telescopes?

Olbers’ paradox poses the question: Why is the sky dark at night? Image via Wikimedia Commons.

The decreasing number of galaxies as time progresses also contributes to the solution for Olbers’ paradox, which is a famous paradox in astronomy, first formulated in the early 1800s by German astronomer Heinrich Wilhelm Olbers.

Olbers ask the question: Why is the sky dark at night if the universe contains an infinity of stars?

The team concluded that indeed there actually is such an abundance of galaxies that, in principle, every patch in the sky contains part of a galaxy. However, starlight from the galaxies is invisible to the human eye and most modern telescopes due to the other known factors that reduce visible and ultraviolet light in the universe.

Those factors are the reddening of light due to the expansion of space, the universe’s dynamic nature, and the absorption of light by intergalactic dust and gas. All combined, this keeps the night sky dark to our vision.

The research team’s study will be published in The Astrophysical Journal, a peer-reviewed journal.

Bottom line: Astronomers announced on October 13, 2016 that an analysis of data from the Hubble Space Telescope and other observatories has revealed there are at least 10 times more galaxies in the observable universe than previously thought.