The Hubble Space Telescope looks at a very rare and odd assemblage of stars that has remained essentially unchanged for the past 10 billion years.

This video zooms into the relic galaxy NGC 1277. Via NASA, ESA, and J. DePasquale (STScI).

Astronomers using NASA’s Hubble Space Telescope are investigating an ancient galaxy – called NGC 1277 – that’s in our cosmic backyard, 240 million light-years from Earth. What makes NGC 1277 unique is that the galaxy is composed exclusively of aging stars that were born 10 billion years ago. NGC 1277 started its life churning out stars 1,000 times faster than in our own Milky Way, but, unlike other galaxies in the local universe, NGC 1277 has not undergone any further star formation. The very rare and odd assemblage of stars has remained essentially unchanged for the past 10 billion years.

Astronomers nickname such galaxies as “red and dead,” because the stars are aging and there aren’t any successive generations of younger stars. Though Hubble has seen such “red and dead” galaxies in the early universe, one has never been conclusively found nearby. The findings were published in the March 12, 2018, issue of the peer-reviewed science journal Nature. 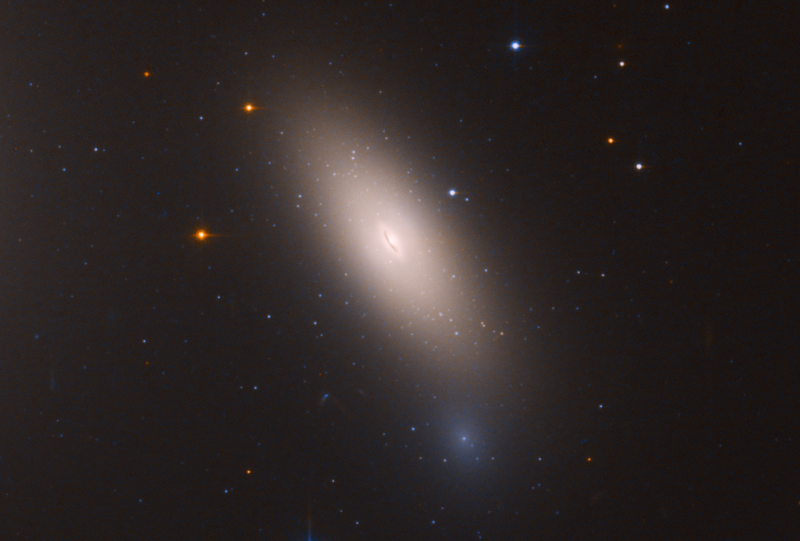 Galaxy NGC 1277 lives near the center of the Perseus cluster of over 1,000 galaxies. NGC 1277 is moving so fast through the cluster, at 2 million miles (3.2 million km) per hour, that it cannot merge with other galaxies to collect stars or pull in gas to fuel star formation. In addition, near the galaxy cluster center, intergalactic gas is so hot it cannot cool to condense and form stars. Image via NASA, ESA, and M. Beasley (Instituto de Astrofísica de Canarias).

The researchers learned that although NGC 1277 has twice as many stars as our Milky Way, it’s one quarter of our galaxy in size. Essentially, the relic galaxy is in a state of “arrested development.” Perhaps, the researchers said, like all galaxies, it started out as a compact object but failed to accrete more material to grow in size to form a pinwheel-shaped galaxy.

Approximately one in 1,000 massive galaxies is expected to be a relic (or oddball) galaxy, like NGC 1277, researchers said. NGC 1277 offers a unique opportunity to see one up close and personal. Ignacio Trujillo, of the Instituto de Astrofisica de Canarias at the University of La Laguna, Spain, is an author of the study. He said in statement:

We can explore such original galaxies in full detail and probe the conditions of the early universe.

This is a blink comparison that plots the location of the red stars and blue stars that dominate the globular clusters in galaxies NGC 1277 and NGC 1278. It shows that NGC 1277 is dominated by ancient red globular clusters. This is evidence that galaxy NGC 1277 stopped making new stars many billions of years ago, compared to NGC 1278, which has more young blue star clusters. Image via NASA, ESA, and Z. Levay (STScI).

The telltale sign of the galaxy’s state lies in the ancient globular clusters of stars that swarm around it. Massive galaxies tend to have both metal-poor (appearing blue) and metal-rich (appearing red) globular clusters. Astronomers think the red clusters form as the galaxy forms, while the blue clusters are later brought in as smaller satellites are swallowed by the central galaxy. However, NGC 1277 is almost entirely lacking in blue globular clusters. Study co-author Michael Beasley, also of the Instituto de Astrofisica de Canarias, said:

I’ve been studying globular clusters in galaxies for a long time, and this is the first time I’ve ever seen this.

The red clusters are the strongest evidence that the galaxy went out of the star-making business long ago. However, the lack of blue clusters suggests that NGC 1277 never grew further by gobbling up surrounding galaxies.

By contrast, our Milky Way contains approximately 180 blue and red globular clusters. This is due partly to the fact that our Milky Way continues cannibalizing galaxies that swing too close by in our Local Group of a few dozen small galaxies. 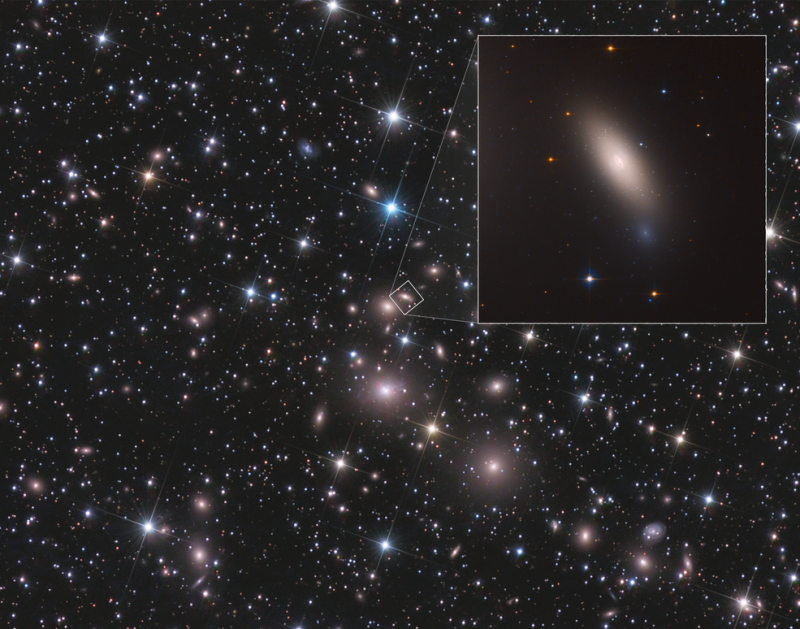 This is a Hubble Space Telescope image of galaxy NGC 1277 (inset). The galaxy lives near the center of the Perseus cluster of over 1,000 galaxies, located 240 million light-years away from Earth. Image via NASA, ESA, M. Beasley (Instituto de Astrofísica de Canarias), and P. Kehusmaa.

The team started looking for “arrested development” galaxies in the Sloan Digital Sky Survey and found 50 candidate massive compact galaxies. Using a similar technique, but out of a different sample, NGC 1277 was identified as unique in that it has a central black hole that is much more massive than it should be for a galaxy of that size. This reinforces the scenario that the supermassive black hole and dense hub of the galaxy grew simultaneously, but the galaxy’s stellar population stopped growing and expanding because it was starved of outside material.

The NASA James Webb Space Telescope, scheduled for launch in 2019, will allow astronomers to measure the motions of the globular clusters in NGC 1277. This will provide the first opportunity to measure how much dark matter the primordial galaxy contains.