Scientists already had Psyche classified as a metallic asteroid, but new observations with the Hubble telescope reveal its rusty surface and provide scientists with a unique view into what Earth-like planets are like during their formation. 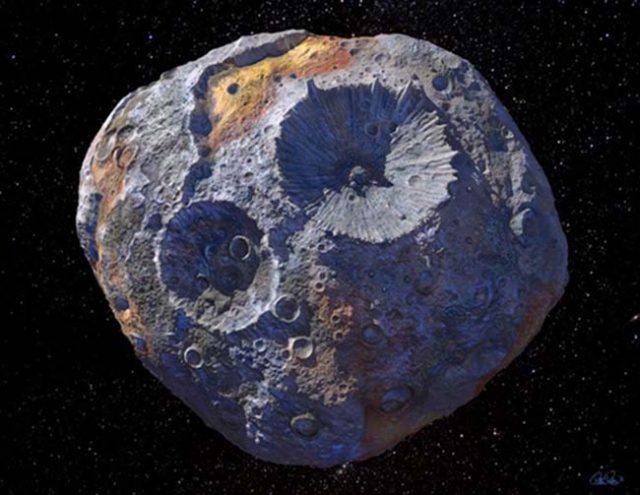 Artist’s concept of 16 Psyche, a massive asteroid located 230 million miles (370 million km) away from Earth. New ultraviolet observations of the asteroid and its surface revealed that it may be made entirely of nickel and iron, making it the perfect candidate to tell the tale of how Earth-like planets are formed. It is thought to be the core of a failed planet formation. Image via Maxar/ ASU/ P. Rubin/
NASA/ JPL-Caltech.

A team of scientists led by Tracy Becker of the Southwest Research Institute in San Antonio, Texas, said on October 26, 2020, that the deepest-ever ultraviolet observations of the asteroid 16 Psyche have revealed a secret: the asteroid may be made entirely of iron and nickel, and its surface may be covered in rust. Psyche was already classified as an M-type asteroid, that is, an asteroid known to contain a significant percentage of metal. It’s one of the most massive objects currently known to be orbiting in the solar system’s asteroid belt between Mars and Jupiter. Generally speaking, metal asteroids are rare, and the study revealed that Psyche may be the most “metal-like” of all known asteroids. Thus Psyche has a story to tell about solid planets like Earth and what happened when they were forming 4 1/2 billion years ago.

These scientists’ paper is slated for publication in the December 2020 issue of the peer-reviewed journal Planetary Science.

At 140 miles (225 km) in diameter, Psyche spans roughly the distance between Philadelphia and Washington, D.C., and provides plenty of surface for scientists to observe and study. New ultraviolet (UV) observations of the massive asteroid have revealed that Psyche’s surface may be mostly made of iron, but scientists believe further study is required to confirm their findings, as lab models provided conflicting outcomes. 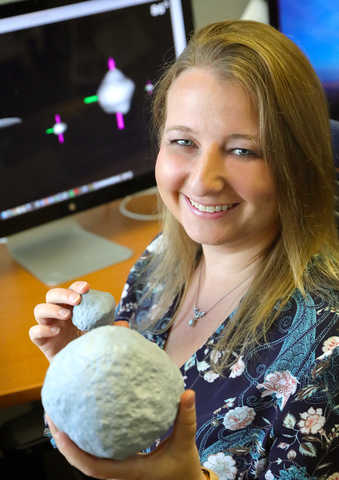 Tracy Becker, a planetary scientist at the Southwest Research Institute, is the lead author on the new study. Image via SwRI.

Becker, a planetary scientist at the Southwest Research Institute, is the lead author on the paper. She told EarthSky:

The way that Psyche reflects UV light is very similar to the way iron and metallic meteorites reflect UV light; the UV spectrum of Psyche is similar to that of iron. But we note that in our computer models, we found we could reproduce the spectrum of Psyche with as little as 10% of iron mixed into other materials. So, we can’t conclude definitively just how much iron is on the surface, but it does look like some metals are there.

Scientists also found another way to detect iron on the surface: by looking for rust. After all, where there is iron, there may be rust, or something similar. To find it, Becker’s team focused their efforts on hunting for spectral evidence of iron oxide, which is typically observed on Earth and other bodies as rust. The scientists needed a way to ferret out iron oxide signatures. While unable to scoop up a sample from 230 million miles (370 million km) away, ultraviolet (UV) observations provided the solution. UV light is made up of short wavelengths that are invisible to the human eye but carry high energy, and are capable of damaging living tissue and causing sunburns and skin cancer. But in astronomy, these short wavelengths of light are beneficial and can help scientists understand chemical composition, density, and temperature. For these researchers, UV light was the key to help unveil iron oxide on the surface of Psyche.

Recent laboratory work shows that you can see the iron oxide signatures in the UV better than at other wavelengths, so we wanted to look for those. The UV is also very sensitive to the uppermost layer of the planetary body, so we would be able to see how much of the asteroid’s surface has been [changed over time].

Becker’s team engaged in patient observation of Psyche, taking UV measurements on both sides of the asteroid to get a complete picture of its surface. The team’s patience paid off when they saw evidence of iron oxide. Becker said in a statement:

We were able to identify, for the first time on any asteroid, what we think are iron oxide ultraviolet absorption bands. This is an indication that oxidation is happening on the asteroid, which could be a result of the solar wind hitting the surface. 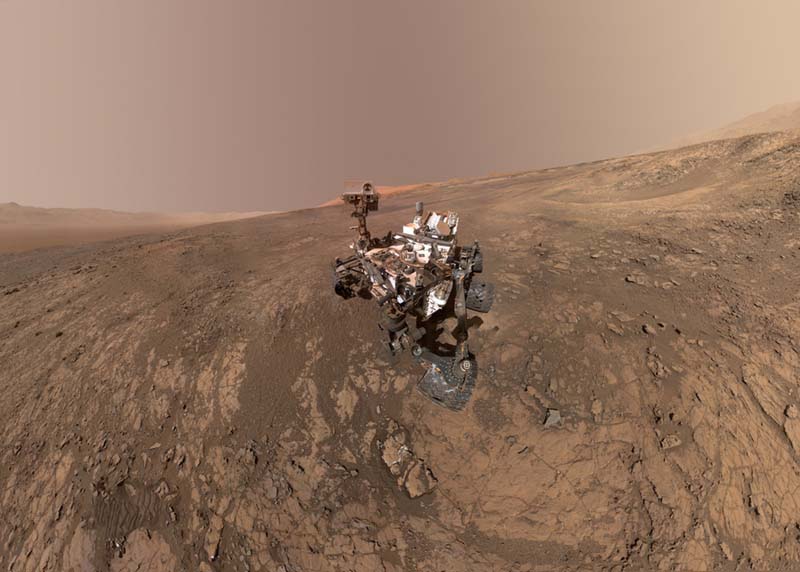 The Curiosity rover took this self-portrait while crossing Vera Rubin Ridge on Mars, showing off the reddish dirt that covers the surface of the planet. That red hue is due to the heavy presence of iron oxide, or rust particles, that are blown around the surface by Martian winds. The presence of rust on celestial bodies like Mars and Psyche gives scientists clues to the amount of iron that exists on their surfaces. Image via NASA/ JPL-Caltech.

Although this is the first time that scientists have observed evidence of iron oxide on an asteroid, it isn’t the first time that rust has been observed in our solar system. Mars – often referred to as the red planet due to its hue – is covered in rust particles, which are blown around on the planet as winds shape its surface. And while the appearance of rust on Psyche doesn’t necessarily mean that the asteroid is corroding, scientists did detect evidence of surface changes.

During observations, Becker’s team noticed that Psyche’s uppermost layers appeared more reflective at deeper UV wavelengths. While Becker said this phenomenon requires further study, she noted that the observed brightening may be the result of further space weathering. She said:

Becker’s team carried out UV emission observations on Psyche using the Space Telescope Imaging Spectrograph (STIS) on the Hubble Space Telescope (HST). Before the study, no other previous UV observations of Psyche had been made, in part due to the difficulty of conducting studies using UV light. Becker said:

We cannot observe any objects in the ultraviolet from ground-based telescopes, since our atmosphere blocks UV light. The only way to observe solar system objects in the UV is with space-based telescopes, which are limited. Psyche hadn’t been observed at these wavelengths – mid- and far-UV – of light before. There had been near-UV observations from the International Ultraviolet Explorer (IUE), but these HST observations go farther in the UV than ever before.

Before the new study, scientists already believed Psyche to be the leftover core of a protoplanet that never finished forming. The new observations, and the discovery of iron oxide signatures, have revealed the asteroid to be truly unique, and even more Earth-like than previously believed. Becker said:

We’ve seen meteorites that are mostly metal, but Psyche could be unique in that it might be an asteroid that is completely made of iron and nickel. Earth has a metal core, a mantle and a crust. It’s possible that as a Psyche protoplanet was forming, it was struck by another object in our solar system and lost its mantle and crust. 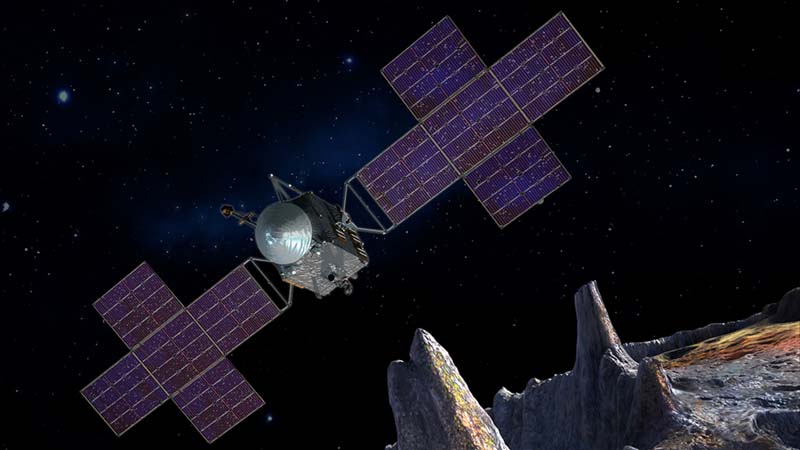 NASA’s Psyche mission will launch toward the asteroid of the same name in 2022. Scientists hypothesize that this asteroid is actually the leftovers of a failed planet formation. New ultraviolet studies with Hubble have shown that Psyche is even more unique than that, as it may consist entirely of nickel and iron, and that the iron may be rusting. Image via NASA/ JPL-Caltech.

The leftovers from this stellar hit-and-run have long sparked interest in Psyche. In 2017, NASA announced a mission to the asteroid, which will be the first such mission to an object not made of rock or ice. Set to launch in 2022, NASA’s orbiter will reach Psyche in 2026, and either confirm or deny scientists’ observations and theories. No matter the outcome, Becker is looking forward to seeing what secrets the mission will reveal. She said:

What makes Psyche and the other asteroids so interesting is that they’re considered to be the building blocks of the solar system. To understand what really makes up a planet and to potentially see the inside of a planet is fascinating. Once we get to Pysche, we’re finally going to understand if that’s the case, even if it doesn’t turn out as we expect. Any time there’s a surprise, it’s always exciting.

Bottom line: New observations of asteroid Psyche with the Hubble Space Telecope have revealed that the asteroid may be made entirely of nickel and iron. Its surface appears to be rusting. The new work provides scientists with a unique view into what Earth-like planets are like during formation.