The Hubble Space Telescope was launched on April 24, 1990. It’s spent the past 3 decades acquiring magnificent images of distant space objects, providing a time machine that’s taken astronomers back to when the universe was less than a billion years old.

This video revisits some of Hubble’s biggest science discoveries throughout its 3 decades of operation, to celebrate the telescope’s 30th anniversary. Video via Hubblecast

By Rodger I. Thompson, University of Arizona

The Hubble Space Telescope launched on the 24th of April, 30 years ago. It’s an impressive milestone especially as its expected lifespan was just 10 years.

One of the primary reasons for the Hubble telescope’s longevity is that it can be serviced and improved with new observational instruments through Space Shuttle visits. 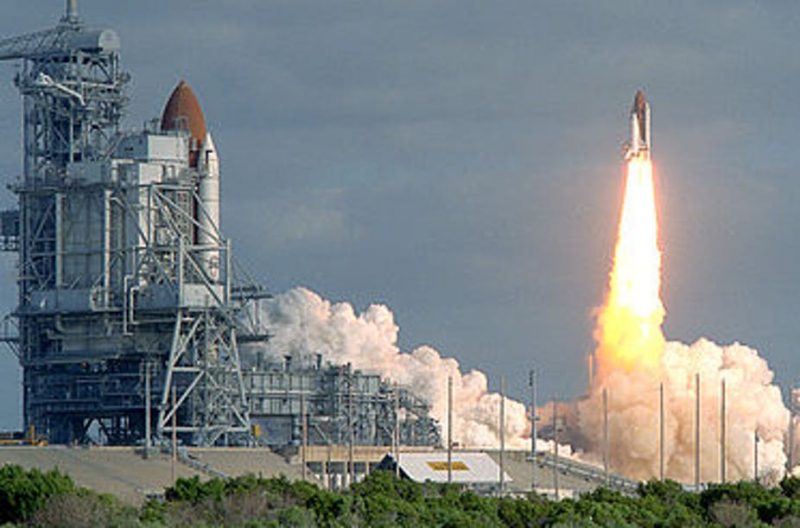 The launch of Hubble Space Telescope on April 24, 1990. This photo captures the first time that there were shuttles on both pad 39a and 39b. Image via NASA/ The Conversation.

When Hubble, or HST, first launched, its instruments could observe ultraviolet light with wavelengths shorter than the eye can see, as well as optical light with wavelengths visible to humans. A maintenance mission in 1997 added an instrument to observe near infrared light, which are longer wavelengths than people can see. Hubble’s new infrared eyes provided two new major capabilities: the ability to see farther into space than before and see deeper into the dusty regions of star formation.

I am an astrophysicist at the University of Arizona who has used near infrared observations to better understand how the universe works, from star formation to cosmology. Some 35 years ago, I was given the chance to build a near infrared camera and spectrometer for Hubble. It was the chance of a lifetime. The camera my team designed and developed has changed the way humans see and understand the universe. The instrument was built at Ball Aerospace in Boulder, Colorado, under our direction.

The light we can see with our eyes is part of a range of radiation known as the electromagnetic spectrum. Shorter wavelengths of light are higher energy, and longer wavelengths of light are lower energy. The Hubble Space Telescope sees primarily visible light (indicated here by the rainbow), as well as some infrared and ultraviolet radiation. Image via NASA/ JHUAPL/ SwRI.

Edwin Hubble, HST’s namesake, discovered in the early 1900s that the universe is expanding and that the light from distant galaxies was shifted to longer, redder wavelengths, a phenomenon called the redshift. The greater the distance, the larger the shift. This is because the further away an object is, the longer it takes for the light to reach us here on Earth and the more the universe has expanded in that time.

One of the new instruments added to Hubble in the second maintenance mission has the awkward name, the Near Infrared Camera and Multi-Object Spectrometer, NICMOS, pronounced “Nick Moss.” The near infrared cameras on NICMOS observed regions of the NHDF and discovered even more distant galaxies with all of their light in the near infrared. 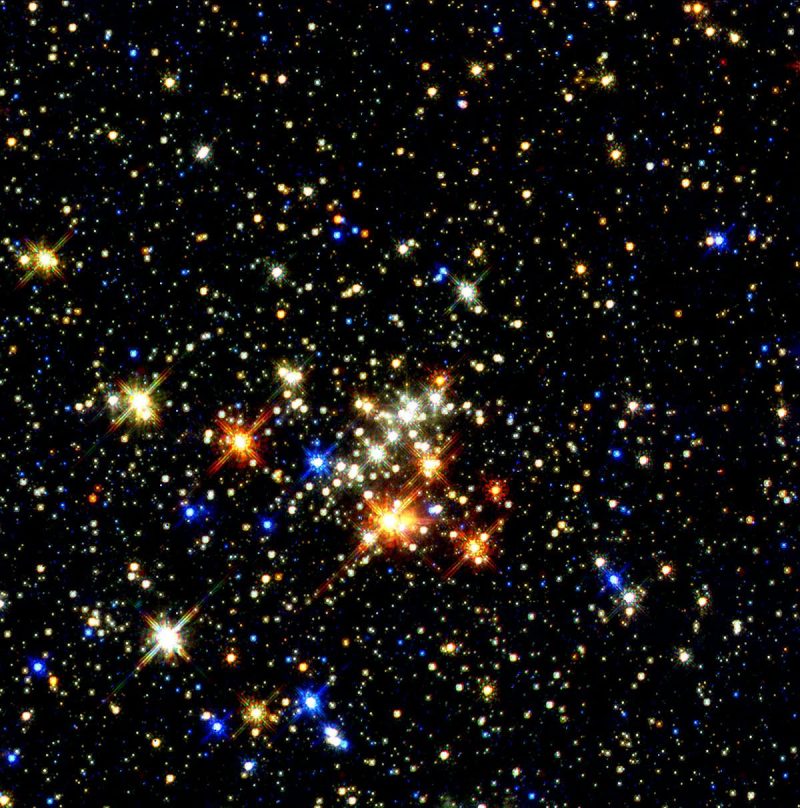 A typical image taken with NICMOS. It shows a gigantic star cluster in the center of our Milky Way. NICMOS, thanks to its infrared capabilities, is able to look through the heavy clouds of dust and gas in these central regions. Image via NASA/ JHUAPL/ SwRI.

Astronomers have the privilege of watching things happen in the past which they call the “lookback time.” Our best measurement of the age of the universe is 13.7 billion years. The distance that light travels in one year is called a light-year. The most distant galaxies observed by NICMOS were at a distance of almost 13 billion light-years. This meant that the light that NICMOS detected had been traveling for 13 billion years and showed what the galaxies looked like 13 billion years ago, a time when the universe was only about 5% of its current age. These were some of the first galaxies ever created and were forming new stars at rates that were more than a thousand times the rate at which most galaxies form stars in the current universe.

Although astronomers have studied star formation for decades, many questions remain. Part of the problem is that most stars are formed in clouds of molecules and dust. The dust absorbs the ultraviolet and most of the optical light emitted by forming stars, making it difficult for Hubble’s ultraviolet and optical instruments to study the process.

The longer, or redder, the wavelength of the light, the less is absorbed. That is why sunsets, where the light must pass through long lengths of dusty air, appear red.

The near infrared, however, has an even easier time passing through dust than the red optical light. NICMOS can look into star formation regions with the superior image quality of Hubble to determine the details of where the star formation occurs. A good example is the iconic Hubble image of the Eagle Nebula, also known as the Pillars of Creation.

The optical image shows majestic pillars which appear to show star formation over a large volume of space. The NICMOS image, however, shows a different picture. In the NICMOS image, most of the pillars are transparent with no star formation. Stars are only being formed at the tip of the pillars. The optical pillars are just empty dust reflecting the light of a group of nearby stars. 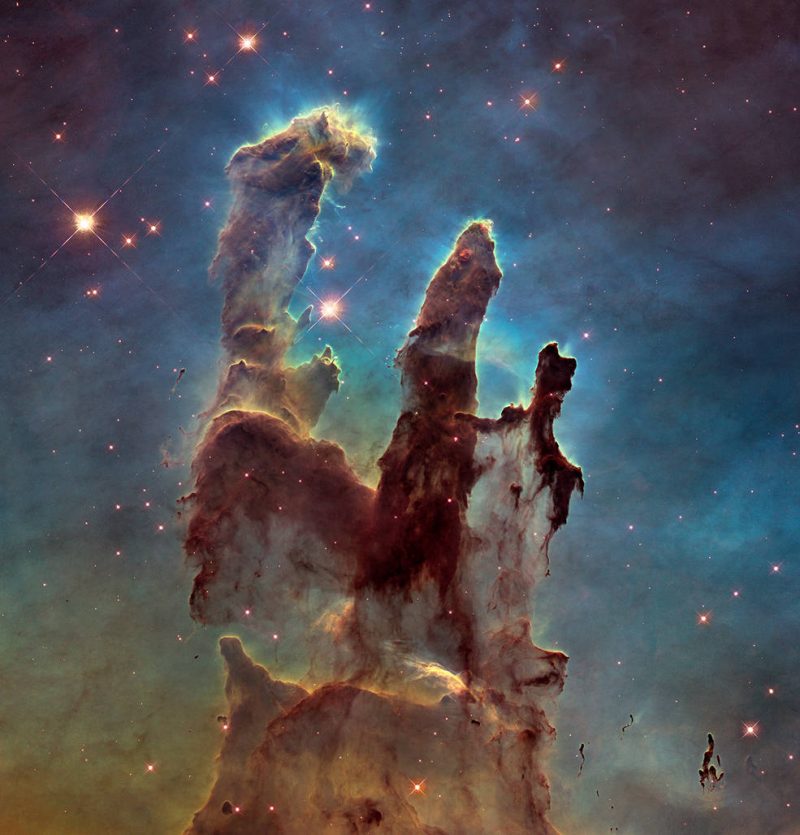 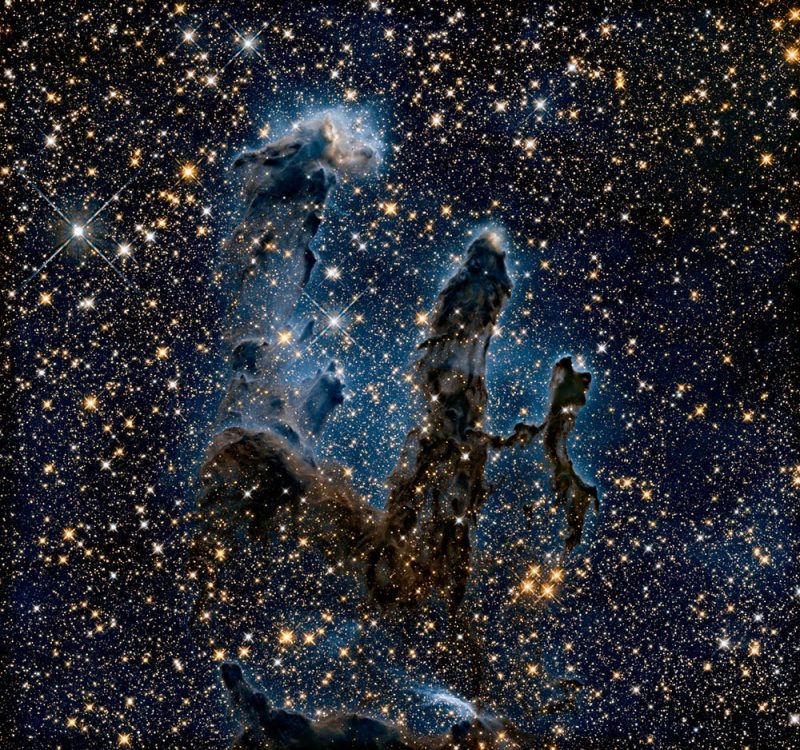 In this Hubble Space Telescope image is the Eagle Nebula’s Pillars of Creation. Here, the pillars are seen in infrared light, which pierces through obscuring dust and gas and unveils a more unfamiliar — but just as amazing — view of the pillars.NASA, ESA/Hubble and the Hubble Heritage Team.

The dawning of the age of infrared

When NICMOS was added into the HST in 1997 NASA had no plans for a future infrared space mission. That rapidly changed as the results from NICMOS became apparent. Based on the data from NICMOS, scientists learned that fully formed galaxies existed in the universe much earlier than expected. The NICMOS images also confirmed that the expansion of the universe is accelerating rather than slowing down as previously thought. The NHDF infrared images were followed by the Hubble Ultra Deep Field images in 2005, which further showed the power of near infrared imaging of distant young galaxies. So NASA decided to invest in the James Webb Space Telescope, or JWST, a telescope much larger than HST and completely dedicated to infrared observations.

On Hubble, a near infrared imager was added to the third version of the Wide Field camera which was installed in May of 2009. This camera used an improved version of the NICMOS detector arrays that had more sensitivity and a wider field of view. The James Webb Space Telescope has much larger versions of the NICMOS detector arrays that have more wavelength coverage than the previous versions.

The James Webb Space Telescope, scheduled to be launched in March 2021, followed by the Wide Field Infrared Survey Telescope, form the bulk of future space missions for NASA. These programs were all spawned by the near infrared observations by HST. They were enabled by the original investment for a near infrared camera and spectrometer to give Hubble its infrared eyes. With the James Webb Space Telescope, astronomers expect to see the very first galaxies that formed in the universe.

Rodger I. Thompson, Professor of Astronomy, University of Arizona