Need a web cam for the November 13-14, 2012 total solar eclipse? Check out these links to online viewing.

The November 13-14, 2012 total solar eclipse will be visible from a narrow path – the path traveled by the moon’s shadow, falling on Earth’s surface – which crosses the South Pacific and parts of Australia. Can’t be there to see it? Watch online via the links below. The partial eclipse begins on November 13 at 19:37 UTC (1:37 p.m. Central Standard Time in the U.S.). The total eclipse begins on November 13 at 20:35 UTC (2:25 p.m. CST). Click here to translate UTC to your time zone. 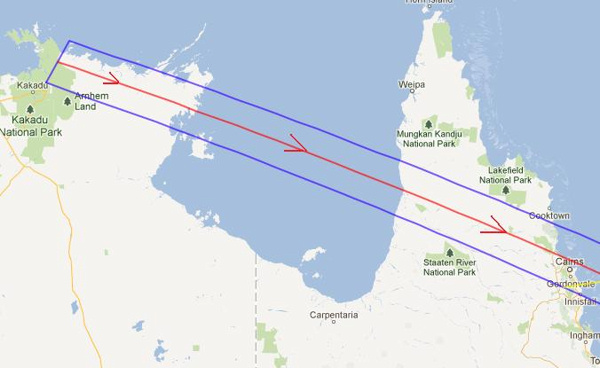 The eclipse begins in local time on November 14 west of the International Date Line over northern Australia, and ends on November 13 east of the date line off the western South American coast. Its greatest magnitude is 1.0500, occurring only 12 hours before the moon’s perigee – or closest point to Earth for the month. Greatest eclipse, known as totality, lasts just over 4 minutes.

Bottom line: Links to web cams and other online viewing for November 13-14, 2012 total solar eclipse, which sweeps across northern Australia.