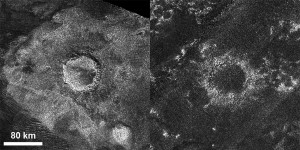 This set of images from the radar instrument on NASA’s Cassini spacecraft shows a relatively “fresh” crater called Sinlap (left) and an extremely degraded crater called Soi (right). Sinlap has a depth-to-diameter ratio close to what we see on Jupiter’s moon Ganymede. Soi has a shallow depth compared to similar craters on Ganymede. These craters are both about 50 miles (80 kilometers) in diameter.

Thank you! Your submission has been received!
Oops! Something went wrong while submitting the form.
END_OF_DOCUMENT_TOKEN_TO_BE_REPLACED