How Titan’s weather has changed its surface

Members of Cassini spacecraft radar team have made the first quantitative estimate of how much the weather on Titan has modified its surface.

Astronomers typically estimate the ages of the surfaces of planets and moons in our solar system by counting the number of craters there. More craters means an older surface. But if the planet or moon has hydrological processes like stream erosion – or wind and weather that cause sand dunes, for example, to fill in the craters – then it’s possible for a world’s surface to appear younger than it actually is. That is the case with Saturn’s largest moon Titan. While most of Saturn’s moons display their ancient faces pockmarked by “thousands and thousands” of craters, scientists say, Titan looks younger than it really is because its craters are being erased.

So far on Titan, of the 50 percent of the surface that we’ve seen in high resolution, we’ve only found about 60 craters. It’s possible that there are many more craters on Titan, but they are not visible from space because they are so eroded.

Neish said this research is the first quantitative estimate of how much the weather on Titan has modified its surface. 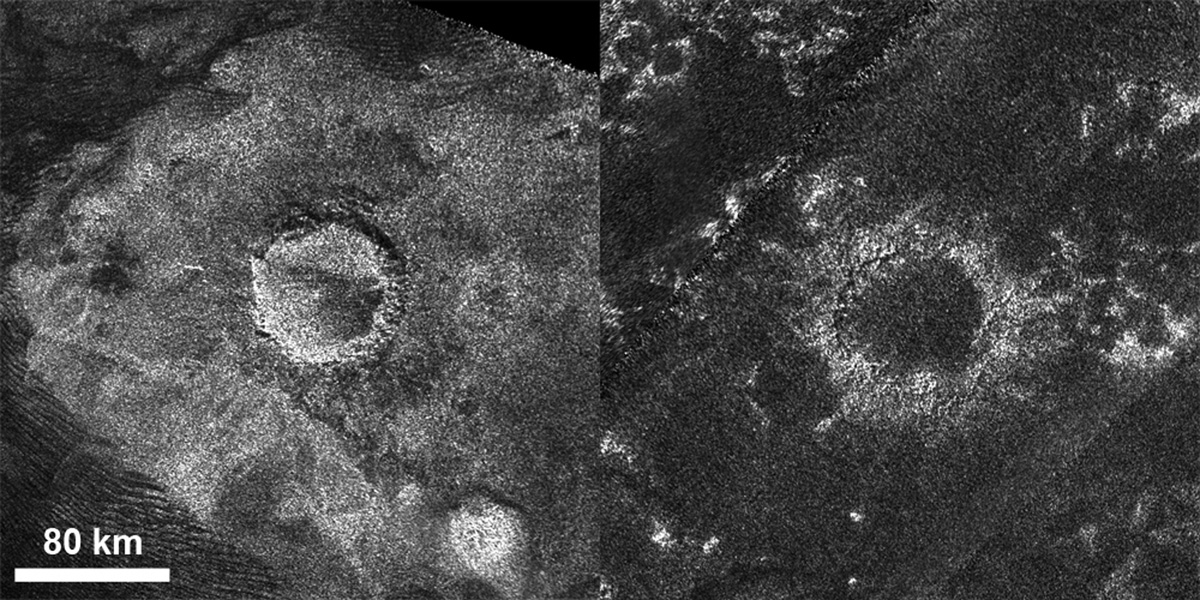 This set of images from the radar instrument on NASA’s Cassini spacecraft shows a relatively fresh crater called Sinlap (left) and an extremely degraded crater called Soi (right). Sinlap has a depth-to-diameter ratio close to what we see on Jupiter’s moon Ganymede. Soi has a shallow depth compared to similar craters on Ganymede. These craters are both about 50 miles (80 kilometers) in diameter. Image credit: NASA/JPL-Caltech/ASI/GSFC. View larger. 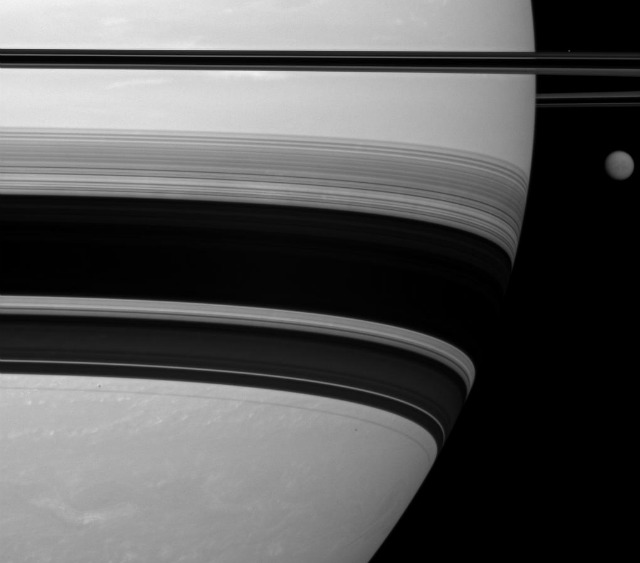 Here’s a relatively new image from the Cassini mission to Saturn, released March 6, 2012. Saturn’s largest moon, Titan, is pictured to the right of the gas giant Saturn. Titan (3,200 miles, or 5,150 kilometers across) is in the upper right. Saturn’s rings appear across the top of the image, and they cast a series of shadows onto Saturn across the middle of the image. More about this image via Cassini mission to Saturn

Titan is the only moon in the solar system with a thick atmosphere. It’s the only world besides Earth known to have lakes and seas on its surface. But Titan is in the outer solar system, where temperatures are much colder than on Earth. Its surface temperature is around minus 290 degrees Fahrenheit (94 kelvins). Thus the “hydrological cycle” on Titan doesn’t utilize water. Instead, the rain that falls from Titan’s skies is a mixture of liquid methane and ethane, compounds that are gases at Earth’s temperatures.

Neish and her team compared craters on Titan to craters on Jupiter’s moon Ganymede. Ganymede is a giant moon with a water ice crust, similar to Titan, so craters on the two moons should have similar shapes. However, Ganymede has almost no atmosphere and thus no wind or rain to erode its surface. Neish said:

We found that craters on Titan were on average hundreds of yards [meters] shallower than similarly sized craters on Ganymede, suggesting that some process on Titan is filling its craters.

Read more about this story from NASA: Titan gets a dune makeover 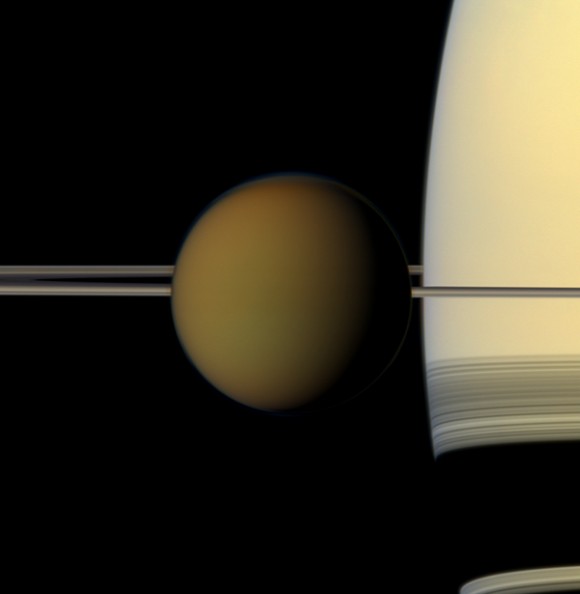 The colorful globe of Saturn’s largest moon, Titan, passes in front of the planet and its rings in this true color snapshot from NASA’s Cassini spacecraft.

Bottom line: Using data from NASA’s Cassini spacecraft, which has been orbiting in the Saturn system since 2004, space scientists have made the first quantitative estimate of how much the weather on Titan has modified its surface. Catherine Neish, a Cassini radar team associate based at NASA’s Goddard Space Flight Center, led this research.