How the universe creates gold

Finally, scientists know how the universe makes gold. They’ve seen it created in the cosmic fire of 2 colliding stars via the gravitational wave they emitted. 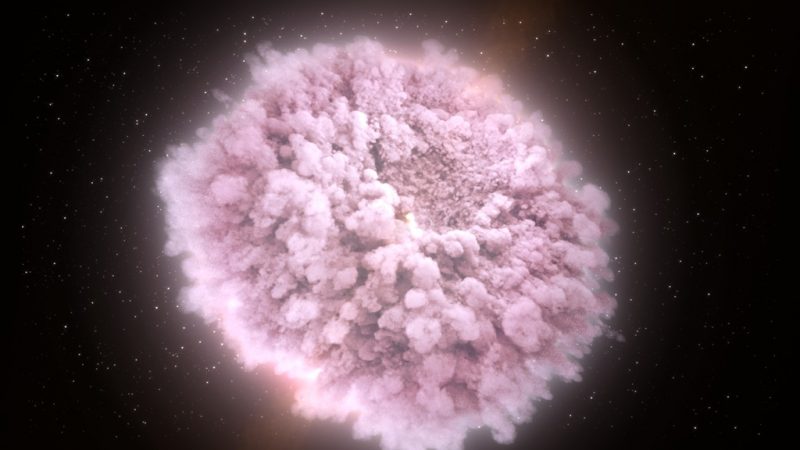 For thousands of years, humans have searched for a way to turn matter into gold. Ancient alchemists considered this precious metal to be the highest form of matter. As human knowledge advanced, the mystical aspects of alchemy gave way to the sciences we know today. And yet, with all our advances in science and technology, the origin story of gold remained unknown. Until now.

Finally, scientists know how the universe makes gold. Using our most advanced telescopes and detectors, we’ve seen it created in the cosmic fire of the two colliding stars first detected by LIGO via the gravitational wave they emitted. 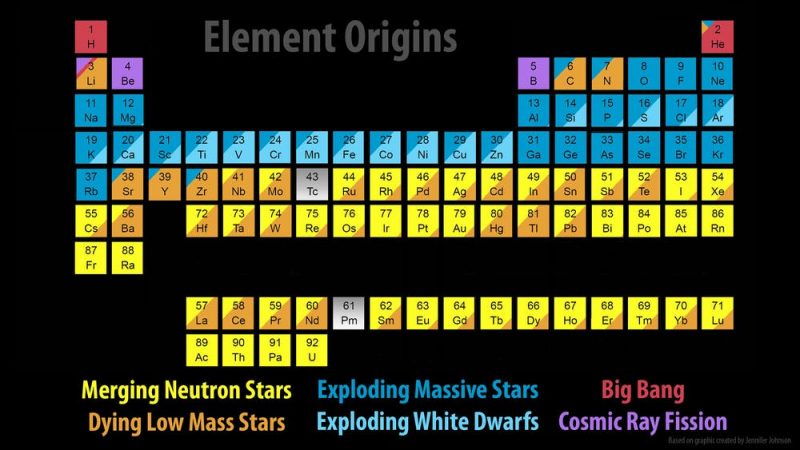 The electromagnetic radiation captured from GW170817 now confirms that elements heavier than iron are synthesized in the aftermath of neutron star collisions. Image via Jennifer Johnson/SDSS.

Origins of our elements

Scientists have been able to piece together where many of the elements of the periodic table come from. The Big Bang created hydrogen, the lightest and most abundant element. As stars shine, they fuse hydrogen into heavier elements like carbon and oxygen, the elements of life. In their dying years, stars create the common metals – aluminum and iron – and blast them out into space in different types of supernova explosions.

For decades, scientists have theorized that these stellar explosions also explained the origin of the heaviest and most rare elements, like gold. But they were missing a piece of the story. It hinges on the object left behind by the death of a massive star: a neutron star. Neutron stars pack one-and-a-half times the mass of the sun into a ball only 10 miles across. A teaspoon of material from their surface would weigh 10 million tons.

Many stars in the universe are in binary systems – two stars bound by gravity and orbiting around each other (think Luke’s home planet’s suns in “Star Wars”). A pair of massive stars might eventually end their lives as a pair of neutron stars. The neutron stars orbit each other for hundreds of millions of years. But Einstein says that their dance cannot last forever. Eventually, they must collide.

On the morning of August 17, 2017, a ripple in space passed through our planet. It was detected by the LIGO and Virgo gravitational wave detectors. This cosmic disturbance came from a pair of city-sized neutron stars colliding at one third the speed of light. The energy of this collision surpassed any atom-smashing laboratory on Earth.

Hearing about the collision, astronomers around the world, including us, jumped into action. Telescopes large and small scanned the patch of sky where the gravitational waves came from. Twelve hours later, three telescopes caught sight of a brand new star – called a kilonova – in a galaxy called NGC 4993, about 130 million light years from Earth.

Astronomers had captured the light from the cosmic fire of the colliding neutron stars. It was time to point the world’s biggest and best telescopes toward the new star to see the visible and infrared light from the collision’s aftermath. In Chile, the Gemini telescope swerved its large 26-foot mirror to the kilonova. NASA steered the Hubble to the same location.

Movie of the visible light from the kilonova fading away in the galaxy NGC 4993, 130 million light years away from Earth.

Just like the embers of an intense campfire grow cold and dim, the afterglow of this cosmic fire quickly faded away. Within days the visible light faded away, leaving behind a warm infrared glow, which eventually disappeared as well.

But in this fading light was encoded the answer to the age-old question of how gold is made.

Shine sunlight through a prism and you will see our sun’s spectrum – the colors of the rainbow spread from short wavelength blue light to long wavelength red light. This spectrum contains the fingerprints of the elements bound up and forged in the sun. Each element is marked by a unique fingerprint of lines in the spectrum, reflecting the different atomic structure.

The spectrum of the kilonova contained the fingerprints of the heaviest elements in the universe. Its light carried the telltale signature of the neutron-star material decaying into platinum, gold and other so-called “r-process” elements. 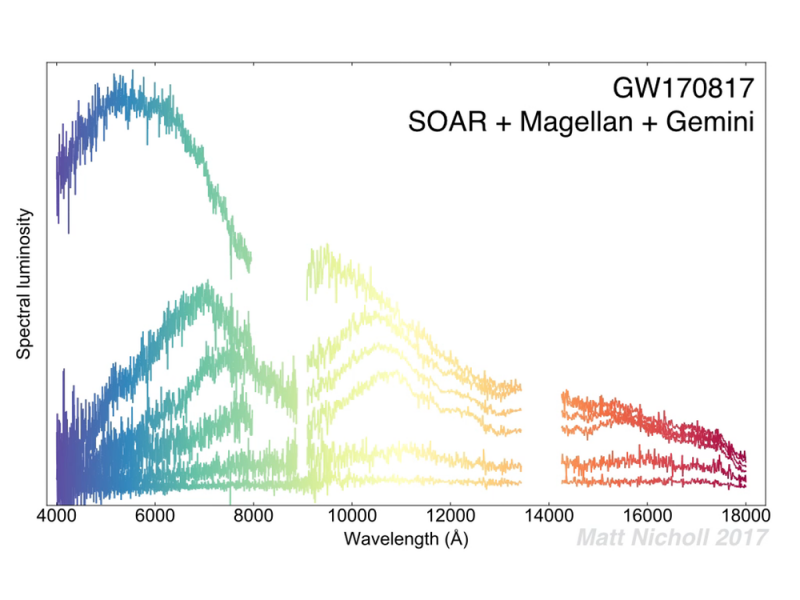 Visible and infrared spectrum of the kilonova. The broad peaks and valleys in the spectrum are the fingerprints of heavy element creation. Image via Matt Nicholl.

For the first time, humans had seen alchemy in action, the universe turning matter into gold. And not just a small amount: This one collision created at least 10 Earths’ worth of gold. You might be wearing some gold or platinum jewelry right now. Take a look at it. That metal was created in the atomic fire of a neutron star collision in our own galaxy billions of years ago – a collision just like the one seen on August 17.

And what of the gold produced in this collision? It will be blown out into the cosmos and mixed with dust and gas from its host galaxy. Perhaps one day it will form part of a new planet whose inhabitants will embark on a millennia-long quest to understand its origin.