How Hubble and Gaia weighed the Milky Way

Scientists used the measured velocities of 44 globular star clusters to measure the mass of our home galaxy, the Milky Way. 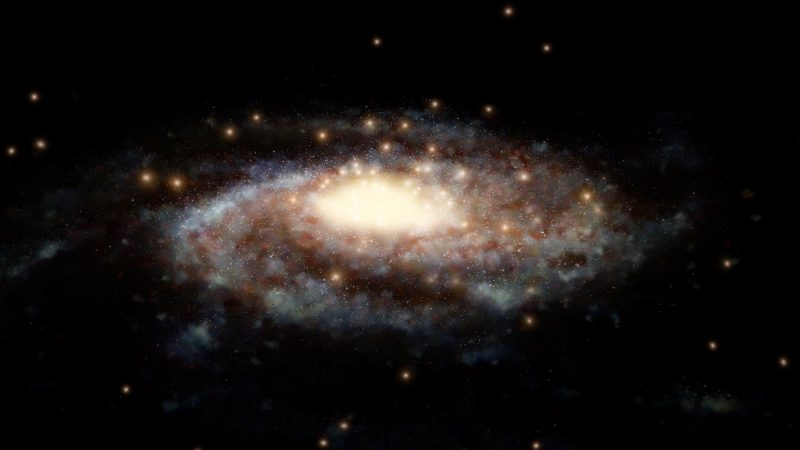 Artist’s concept of a computer generated model of our home galaxy, the Milky Way, and the accurate positions of the globular clusters used in this study surrounding it. Image via ESA/Hubble/NASA/L. Calçada/SpaceTelescope.org.

Using NASA’s Hubble Space Telescope and the European Space Agency’s Gaia satellite, astronomers said late last week (March 7, 2019) they’ve been able to come up with one of the most accurate measurements yet of the mass of our Milky Way galaxy. Their work has been accepted for publication in the peer-reviewed Astrophysical Journal (preprint here).

The Milky Way weighs in at about 1.5 trillion times the mass of our sun. Does that mean it has 1.5 trillion sunlike stars? Not at all. Only a few percent of the Milky Way’s mass is contributed by the galaxy’s approximately 200 billion stars, these astronomers said. That few percent includes the 4-million-solar-mass supermassive black hole at the Milky Way’s center. They said most of the rest of the galaxy’s mass – some 90 percent of it – is locked up in invisible and mysterious dark matter. A statement from HubbleSite explained:

Earlier research dating back several decades used a variety of observational techniques that provided estimates for our galaxy’s mass ranging between 500 billion to 3 trillion solar masses. The improved measurement is near the middle of this range …

The new mass estimate puts our galaxy on the beefier side, compared to other galaxies in the universe. The lightest galaxies are around a billion solar masses, while the heaviest are 30 trillion, or 30,000 times more massive. The Milky Way’s mass of 1.5 trillion solar masses is fairly normal for a galaxy of its brightness.

Clearly, it’s not possible to put the Milky Way on a scale. How does one weigh a galaxy? The astronomers’ statement said:

These astronomers used Hubble and Gaia to measure the three-dimensional movement of globular star clusters — isolated spherical islands each containing hundreds of thousands of stars that orbit the center of our galaxy.

Although we cannot see it, dark matter is the dominant form of matter in the universe, and it can be weighed through its influence on visible objects like the globular clusters. The more massive a galaxy, the faster its globular clusters move under the pull of gravity. Most previous measurements have been along the line of sight to globular clusters, so astronomers know the speed at which a globular cluster is approaching or receding from Earth. However, Hubble and Gaia record the sideways motion of the globular clusters, from which a more reliable speed (and therefore gravitational acceleration) can be calculated.

When the Gaia and Hubble measurements are combined as anchor points, like pins on a map, [we] can estimate the distribution of the Milky Way’s mass out to nearly 1 million light-years from Earth.

Bottom line: Scientists used the measured velocities of 44 globular star clusters to measure the mass of our home galaxy, the Milky Way.