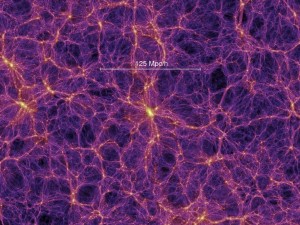 According to what astronomers know now, the very early universe was more or less uniform as it expanded outward from the Big Bang. But there were some areas of slightly higher density. And, over time, those areas of higher density became the superclusters. Now -according to the most recent ideas about what the universe looks like – as we peer at the universe as a whole, it has this sort of “honey-comb” structure. The walls of the honeycomb are the superclusters of galaxies.

Thank you! Your submission has been received!
Oops! Something went wrong while submitting the form.
END_OF_DOCUMENT_TOKEN_TO_BE_REPLACED