How a violent collision at Vesta’s pole formed equatorial grooves

Researchers used an ultra-high-speed cannon to simulate a collision on Vesta. Images taken at a million frames per second show how Vesta got its grooves. 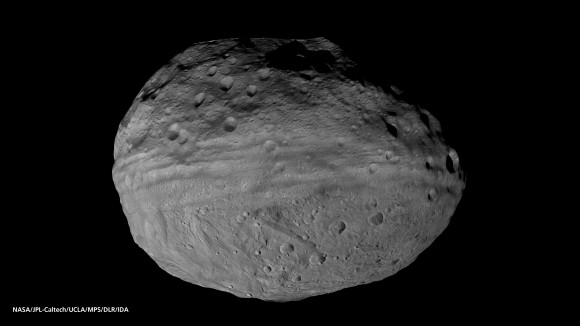 Asteroid Vesta and the deep grooves at its equator. Some are wider than the Grand Canyon, on a world that’s only 326 miles (525 km) across. Image via NASA/JPL/Caltech

Vesta is one of the only asteroids that’s been examined close-up by a spacecraft, and even this little world has its own story to tell. When the Dawn spacecraft visited it in 2011, among other things it found deep grooves that circle Vesta’s equator. Scientists all along believed that these equatorial grooves were caused by a massive collision – generating almost unimaginable levels of energy – at Vesta’s south pole. But how exactly does a collision at a pole cause grooves at a world’s equator? This week (November 3, 2014), Brown University researchers described their analysis of the violent chain of events deep in Vesta’s interior that formed those deep surface grooves, some of which are wider than the Grand Canyon. The research will appear in the February 2015 issue of the journal Icarus and is now available online.

Vesta is the second-most-massive body in the asteroid belt and contains a whooping 9% of all the mass in the belt, which is the rocky debris field between Mars and Jupiter. But it’s small. Its mean diameter is only 326 miles (525 kilometers). Peter Schultz, professor of Earth, environmental, and planetary sciences at Brown is the paper’s senior author. He said in a press release:

When big things happen to small bodies, it shakes them to the core.

The Brown research – led by Angela Stickle, a former graduate student at Brown and now a researcher at the Johns Hopkins University Applied Physics Laboratory – employed an ultra-high-speed cannon belonging to NASA, and computer models, to simulate the collision at Vesta’s pole. The scientists’ analysis of the images — taken at a million frames per second — tell the story of Vesta’s equatorial grooves. Schultz said:

Vesta got hammered. The whole interior was reverberating, and what we see on the surface is the manifestation of what happened in the interior. 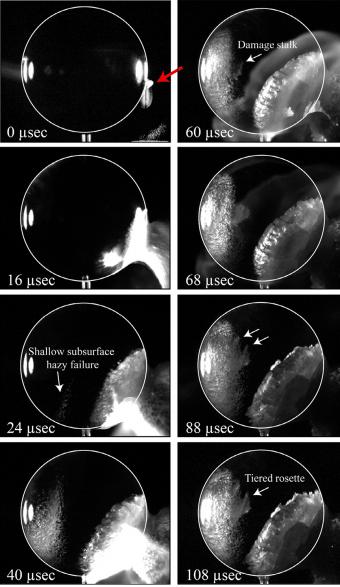 A high-speed camera recorded a laboratory simulation of a space collision, like that on asteroid Vesta. An analysis of shock propagation shows what might have enabled a collision at Vesta’s pole to cause canyon-like grooves around this little world’s equator. Image via Angela Stickle and Peter Schultz

The research suggests the impactor – likely another object in the asteroid belt – came in at an angle, rather than straight on. While creating the Rheasilvia basin on Vesta’s south pole, that glancing blow did an almost unimaginable amount of damage. The study shows that just seconds after the collision, rocks deep inside Vesta began to crack and crumble under the stress. Within two minutes major faults reached near the surface, forming deep the canyons seen today near Vesta’s equator, far from the impact point.

For the study, the researchers used the Ames Vertical Gun Range, a cannon with a 14-foot barrel used to simulate collisions on celestial bodies. The gun uses gunpowder and compressed hydrogen gas to launch projectiles at blinding speed, up to 16,000 miles per hour (26,000 kph). For this latest research, Schultz and his colleagues launched small projectiles at softball-sized spheres made of an acrylic material called PMMA. When struck, the normally clear material turns opaque at points of high stress. By watching the impact with high-speed cameras that take a million shots per second, the researchers can see how these stresses propagate through the material.

The experiments showed that that damage from the impact starts where one would expect: at the impact point. But shortly after, failure patterns begin to form inside the sphere, opposite the point of impact. Those failures grow inward toward the sphere’s center and then propagate outward toward the edges of the sphere like a blooming flower.

Using numerical models to scale the lab collision up to the size of Vesta, the second-largest object in the asteroid belt, the researchers showed that the outward-blooming “rosette” of damage extending to the surface is responsible for the troughs that form a belt around Vesta’s equator.

The research shows that even a glancing blow can have tremendous consequences.