How big can black holes grow?

Black holes could grow as large as 50 billion suns, before the ‘food’ that makes them grow crumbles into stars, says new research. 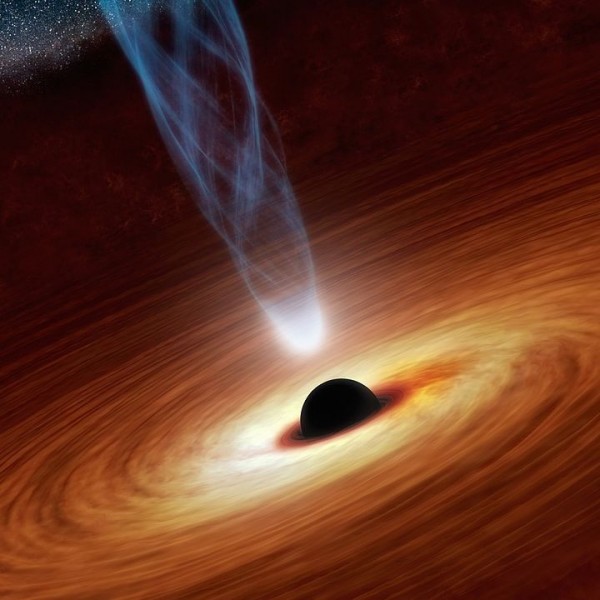 Artist’s concept of a supermassive black hole – with a mass millions to billions of times that of our sun – via NASA.

In recent decades, astronomers have come to believe that supermassive black holes probably lie at the hearts of most large galaxies. Our own Milky Way galaxy, for example, is thought to contain a central black hole as massive as four million suns, and the relatively nearby supergiant elliptical galaxy M87 is thought to have a black hole of 6 billion solar masses. Other distant galaxies are thought to have even more massive central black holes. How big can black holes grow? New research from the University of Leicester in England suggests that black holes at the hearts of galaxies could grow as massive as 50 billion suns before losing the disks of gas they need to sustain themselves. The paper – titled How Big Can a Black Hole Grow? – is published in the journal Monthly Notices Letters of the Royal Astronomical Society.

Astronomical theorist Andrew King led the research, which explores the regions of space around supermassive black holes, where the gas that feeds the hole settles into an orbiting disk. According to a December 18, 2015 statement from the University of Leicester:

This gas can lose energy and fall inwards, feeding the black hole. But these discs are known to be unstable and prone to crumbling into stars.

Professor King calculated how big a black hole would have to be for its outer edge to keep a disc from forming, coming up with the figure of 50 billion solar masses.

The study suggests that without a disc, the black hole would stop growing, meaning 50 billion suns would roughly be the upper limit. The only way it could get larger is if a star happened to fall straight in or another black hole merged with it.

The significance of this discovery is that astronomers have found black holes of almost the maximum mass, by observing the huge amount of radiation given off by the gas disc as it falls in. The mass limit means that this procedure should not turn up any masses much bigger than those we know, because there would not be a luminous disc.

Bigger black hole masses are in principle possible – for example, a hole near the maximum mass could merge with another black hole, and the result would be bigger still. But no light would be produced in this merger, and the bigger merged black hole could not have a disc of gas that would make light.

One might nevertheless detect it in other ways, for example as it bent light rays passing very close to it (gravitational lensing) or perhaps in future from the gravitational waves that Einstein’s General Theory of Relativity predicts would be emitted as it merged.

Botton line: New research from theorist Andrew King of the University of Leicester suggests that black holes could grow as large as 50 billion suns, before the infalling gas that makes them grow crumbles into stars.