How aspen leaves could save Mars rovers

Aspen trees – fondly called Quakies by some – have trembling, quivering leaves. Now those leaves have inspired an energy-harvesting mechanism that might rescue dust-laden rovers on Mars. 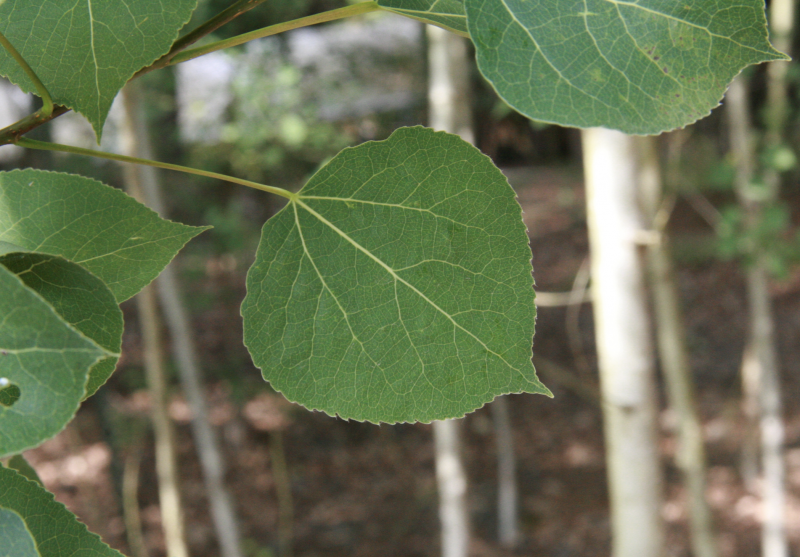 The leaves and trunks of quaking aspen – Populus tremuloides – via The Wild Garden.

The technique of using nature to solve human problems is called biomimicry. Researchers at University of Warwick in Coventry, England, said this week (March 18, 2019) that they used this technique – inspired by the unique movement of the leaves of quaking aspen trees (Populus tremuloides) – to devise an energy-harvesting mechanism that could power weather sensors in hostile environments. They said the mechanism might also serve a backup energy supply that could save and extend the life of future Mars rovers.

That’s particularly interesting now, in the wake of the loss of the Mars rover Opportunity, whose solar power supply succumbed to a big Mars dust storm last summer.

If you’ve never been in an aspen forest, you’ve missed something. The leaves of these trees – commonly called Quakies in some parts of the U.S. Southwest – quiver in the slightest breeze. Many people find them restful, and they are certainly uniquely beautiful.

These engineering researchers saw something else in aspen leaves. They found that the underlying mechanisms that produce an aspen leaf’s quiver in low wind could generate electrical power, as they said, “efficiently and effectively.” They designed a device modeled on the leaf that exploits wind-generated movement. Their work is published in Applied Physics Letters, which is reviewed by multiple editors and expert referees.

University of Warwick’s Sam Tucker Harvey – a Ph.D. candidate in engineering – is lead author on the paper. He said:

What’s most appealing about this mechanism is that it provides a mechanical means of generating power without the use of bearings, which can cease to work in environments with extreme cold, heat, dust or sand. While the amount of potential power that could be generated is small, it would be more than enough to power autonomous electrical devices, such as those in wireless sensor networks. These networks could be utilized for applications such as providing automated weather sensing in remote and extreme environments.

Engineering professors Petr Denissenko and Igor A. Khovanov, both of University of Warwick, are co-authors on the new paper. Denissenko noted that one future application could be as a backup power supply for future Mars landers and rovers. He said:

The performance of the Mars rover Opportunity far exceeded its designers’ wildest dreams but even its hard-working solar panels were probably eventually overcome by a planetary-scale dust storm. If we could equip future rovers with a backup mechanical energy harvester based on this technology, it may further the lives of the next generation of Mars rovers and landers.

A statement from these scientists explained:

The key to aspen leaves’ low-wind but large-amplitude quiver isn’t just the shape of the leaf but more importantly relates to the effectively flat shape of the stem.

The University of Warwick researchers used mathematical modeling to come up with a mechanical equivalent of the leaf. They then used a low-speed wind tunnel to test a device with a cantilever beam like the flat stem of the Aspen leaf, and a curved blade tip with a circular arc cross-section acting like the main leaf.

The blade was then oriented perpendicular to the flow direction, which allows the harvester to produce self-sustained oscillations at uncharacteristically low wind speeds like the aspen leaf. The tests showed that the air flow becomes attached to the rear face of the blade when the blade’s velocity becomes high enough, hence acting more similarly to an aerofoil rather than to the bluff bodies which have typically been studied in the context of wind energy harvesting.

In nature, the propensity of a leaf to quiver is also enhanced by the thin stem’s tendency to twist in the wind in two different directions. However, the researchers modeling and testing found that they did not need to replicate the additional complexity of a further degree of movement in their mechanical model. Simply replicating the basic properties of the flat stem in a cantilever beam and curved blade tip with a circular arc cross-section acting like the main leaf was enough to create sufficient mechanical movement to harvest power.

The researchers said they will next examine which mechanical movement-based power-generating technologies would best be able to exploit this device and how the device could best be deployed in arrays.

Want to learn more about how aspen leaves tremble? And listen for their characteristic rustle? Check out this video:

Bottom line: Aspen leaves are known for their unique quiver in the slightest breeze. Their movement inspired researchers at University of Warwick to devise a new energy-harvesting mechanism for weather sensors, which might also serve a back-up energy supply for future Mars rovers.