Astronomers say the two stars might be heading for catastrophe. They will likely either merge to create a single giant star or form a double black hole. 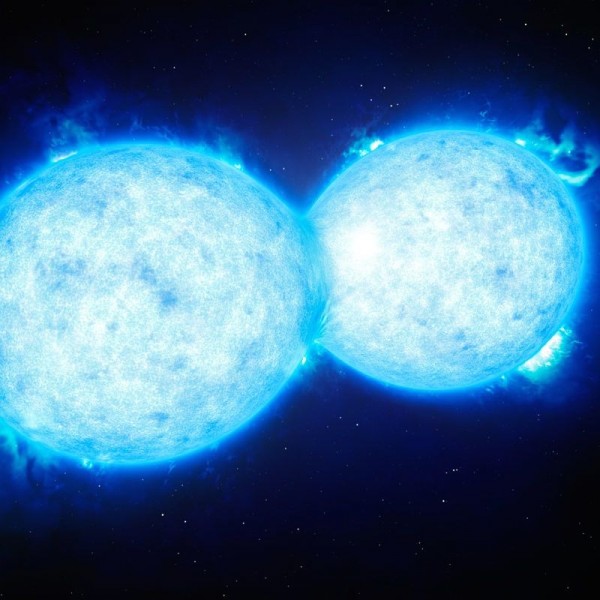 This artist’s impression shows VFTS 352 — hottest and most massive double star system known to date where the two components are in contact and sharing material. Image via ESO

We know that many stars in our galaxy are in double or multiple systems, but here are two stars so close they touch. An international team of astronomers said this week (October 21, 2015) that this system – known to them as VFTS 352 – is the hottest and most massive touching double star system observed so far. What’s more, they said, the two stars might be heading for a catastrophe. The two stars will likely either merge to create a single giant star or form a double black hole.

VFTS 352 is located about 160,000 light-years from Earth in the Tarantula Nebula, which itself is in the Large Magellanic Cloud visible from Earth’s Southern Hemisphere. The Tarantula Nebula is known as the most active region of star formation in the nearby universe, and the VFTS 352 system is said to be:

…among the most extreme and strangest yet found.

The two stars of the VFTS 352 system are very hot, bright and massive, and they whirl around each other in slightly more than one Earth-day. Their centers are separated by just 7.5 million miles (12 million km). ESO said in a statement:

In fact, the stars are so close that their surfaces overlap and a bridge has formed between them. VFTS 352 is not only the most massive known in this tiny class of ‘overcontact binaries’ — it has a combined mass of about 57 times that of the sun — but it also contains the hottest components — with surface temperatures above 40,000 degrees Celsius [ed note: 70,000 degrees Fahrenheit; in contrast to about 10,000 degrees Fahrenheit for our sun’s surface].

Extreme stars like the two components of VFTS 352, play a key role in the evolution of galaxies and are thought to be the main producers of elements such as oxygen. Such double stars are also linked to exotic behavior such as that shown by vampire stars, where a smaller companion star sucks matter from the surface of its larger neighbor.

In the case of VFTS 352, however, both stars in the system are of almost identical size. Material is, therefore, not sucked from one to another, but instead may be shared. The component stars of VFTS 352 are estimated to be sharing about 30 per cent of their material. 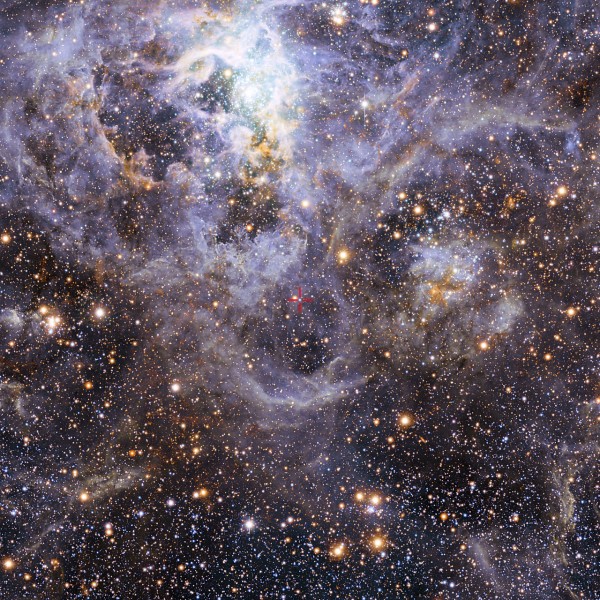 This image shows the location of VFTS 352, about 160,000 light-years from Earth in the Large Magellanic Cloud. This composite view of the Tarantula star-forming region includes visible-light images from the Wide Field Imager at the MPG/ESO 2.2-meter telescope at La Silla and infrared images from the 4.1-meter infrared VISTA telescope at Paranal. Image via ESO

These are very massive stars, and thus they burn brightly and quickly, and their lives are short. So catching two such massive stars in the act of touching is rare, and astronomers feel fortunate to have done it.

They say that the two stars of VFTS 352 are facing a dramatic end, with one of two outcomes possible.

The first potential outcome is the merging of the two stars, which would likely produce a rapidly rotating, and possibly magnetic, gigantic single star. Lead scientist of the project, Hugues Sana, of the University of Leuven in Belgium said:

If it keeps spinning rapidly it might end its life in one of the most energetic explosions in the universe, known as a long-duration gamma-ray burst.

The second possibility is explained by the lead theoretical astrophysicist in the team, Selma de Mink of University of Amsterdam:

If the stars are mixed well enough, they both remain compact and the VFTS 352 system may avoid merging. This would lead the objects down a new evolutionary path that is completely different from classic stellar evolution predictions. In the case of VFTS 352, the components would likely end their lives in supernova explosions, forming a close binary system of black holes. Such a remarkable object would be an intense source of gravitational waves.

These astronomers add that:

….Proving the existence of this second evolutionary path would be an observational breakthrough in the field of stellar astrophysics.

Bottom line: ESO’s Very Large Telescope has found the hottest and most massive touching double star. The system – located in the Tarantula Nebula – is called VFTS 352. The two stars might eventually either merge to create a single giant star or form a double black hole.