Milky Way is Surrounded by Huge Halo of Hot Gas 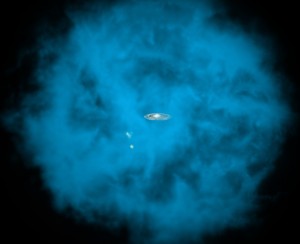 Astronomers have used Chandra to find evidence that our Milky Way Galaxy is embedded in an enormous halo of hot gas that extends for hundreds of thousands of light years. This artist’s illustration shows the halo of hot gas, in blue, around the Milky Way and two small neighboring galaxies. The mass of the halo is estimated to be comparable to the mass of all the stars in the Milky Way galaxy. If the size and mass of this gas halo is confirmed, it could be the solution to the “missing-baryon” problem for the Galaxy.

Thank you! Your submission has been received!
Oops! Something went wrong while submitting the form.
END_OF_DOCUMENT_TOKEN_TO_BE_REPLACED